It’s August 12, 2018: one year after the events that shook our beloved community. A year ago, I desperately wanted to believe that the horrors we experienced were imported into Charlottesville by outsiders. A year later I have to face the truth – some of the hate was homegrown. Two of the organizers were graduates of the university. People we counted on to protect our community let us down in a shocking way. This year, our children witnessed an emboldened racism on their own school bus that made them so miserable, they begged to be driven to school.

Here in Charlottesville, we’ve been on tenterhooks for weeks as we’ve anticipated the anniversary of that terrible day last summer. In the last few days, police and the National Guard have poured into Charlottesville. Seven hundred policemen have been housed in dormitories on grounds. We’ve heard the drone of military helicopters above for days. We speculated that the aggressive police presence meant that there was information we weren’t privy to. It was unnerving to say the least. Last year the authorities told us to stay at home, and we listened. This year, my family was determined to stand in solidarity with our community.

My husband sang at the Morning of Reflection and Renewal at the University of Virginia. Afterward, we decided to go to the Downtown Mall, where Heather Heyer was murdered and where dozens others were injured last year. If nothing else, we would go to support the merchants whose businesses were going to take a huge hit once again. We drove through mostly empty streets with trepidation. When we arrived, the only way to access the pedestrian mall was to go through the most intense security I’ve ever experienced anywhere. My entire backpack was gone through with meticulous care. Every single zipper was opened. My wallet was taken out and opened.

Most of the stores on the mall were closed. In one of the few stores that were open, we chatted with the store manager about the security getting onto the mall. She told us that one of her employees didn’t come in, because her parents didn’t feel comfortable sending her to work that day. She told us that as a woman who lived alone, she always carried pepper spray in her purse. This had been confiscated. She told us that another employee had her Swell water bottle taken away. (If you don’t know, those are rather expensive water bottles)! You know what wouldn’t have been taken away at the security checkpoints? Guns. Wouldn’t want to infringe on anyone’s Second Amendment rights. 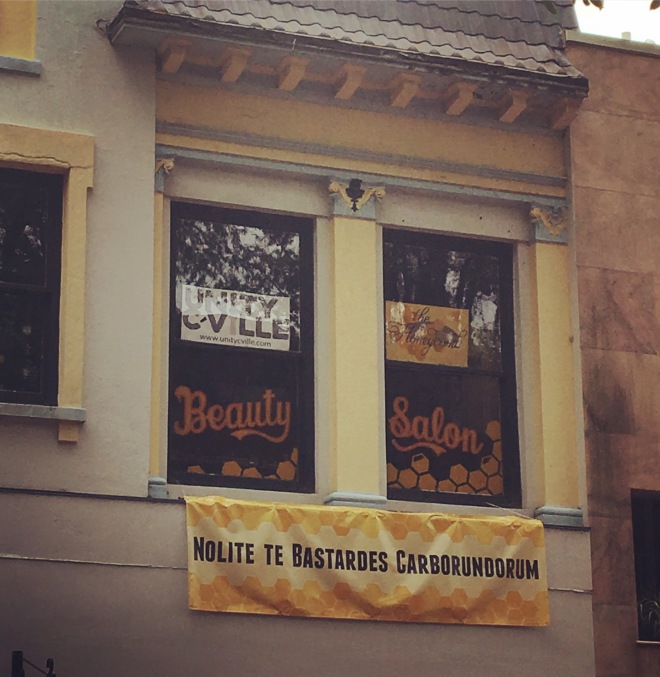 “Don’t let the bastards get you down.”

That was our plan.

On Sunday morning we went to a Community Gathering Against White Supremacy.

We made it through the weekend in peace. We fervently hope that it lasts. I’ll never see Charlottesville in the same way I did a year ago, but I love this town more than ever. It’s not a perfect idyll, but it is a city willing to confront its past and to strive to do better.