This winter I started wearing a brand new, never before worn coat that’s been hanging in my closet for…the last decade.

I know this is extreme. I blame it on what my husband likes to call “genetic garbage.” It makes me who I am, and marks me as a member of my own little tribe of weirdos.

A couple years ago, I was at an event with my two sisters. Two of us couldn’t stop cooing over the dress our sister was wearing.

“How come we’ve never seen you wear that before? Is it new?”

Our sister sheepishly confessed that it wasn’t new, but she had never worn it before. It had been hanging in her closet for a while.

“I have this thing about wearing new clothes…I’m too embarrassed to wear things right away when I buy them. So then when I eventually do wear something and someone asks me if it’s new, I can honestly say: No, I’ve had it for a while.”

We’ve made other discoveries like this over the years. Once my sister told us that she would hate it when people sang Happy Birthday to her, because it always made her tear up from embarrassment. Until then, I thought I was the only who had that weird reaction.

A few years ago that same sister and I realized we share yet another genetic garbage trait. For years I suffered from the feeling that my legs were burning hot. One day I texted my sisters to ask, “Does anyone else feel like their thighs are as hot as curling irons?” To my surprise, my sister immediately texted back “YES!” She went on to explain that her natural instinct to research the problem was hampered by her fear of googling “hot thighs.” She eventually diagnosed our issue as a kind of neuropathy, for which there is nothing to be done but to commiserate with one’s sister and fellow sufferer!

The classic example of genetic garbage on my husband ‘s side of the family is “concentration tongue.” Whenever my father-in-law, husband, son, or daughter are performing a task that requires focus, their tongues slide out of their mouths. If the task is really demanding, the tongue starts to waggle back and forth. The harder the task, the faster the waggle: 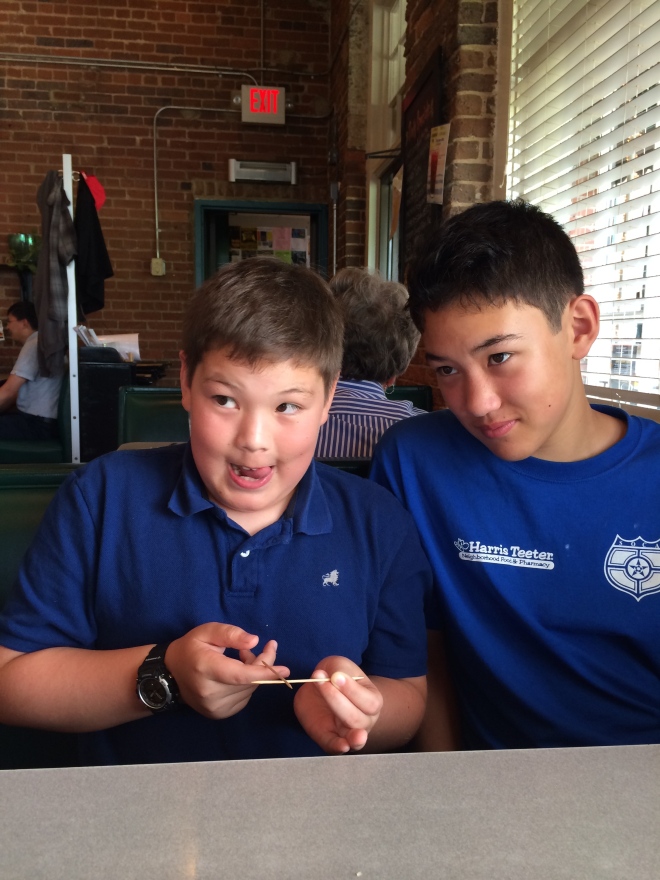 “I think I almost have it…” 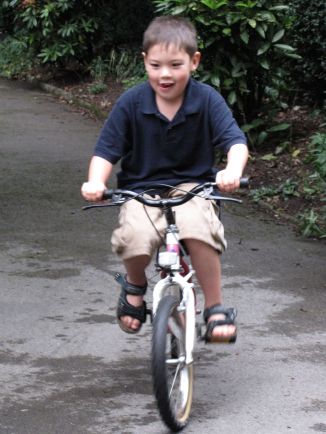 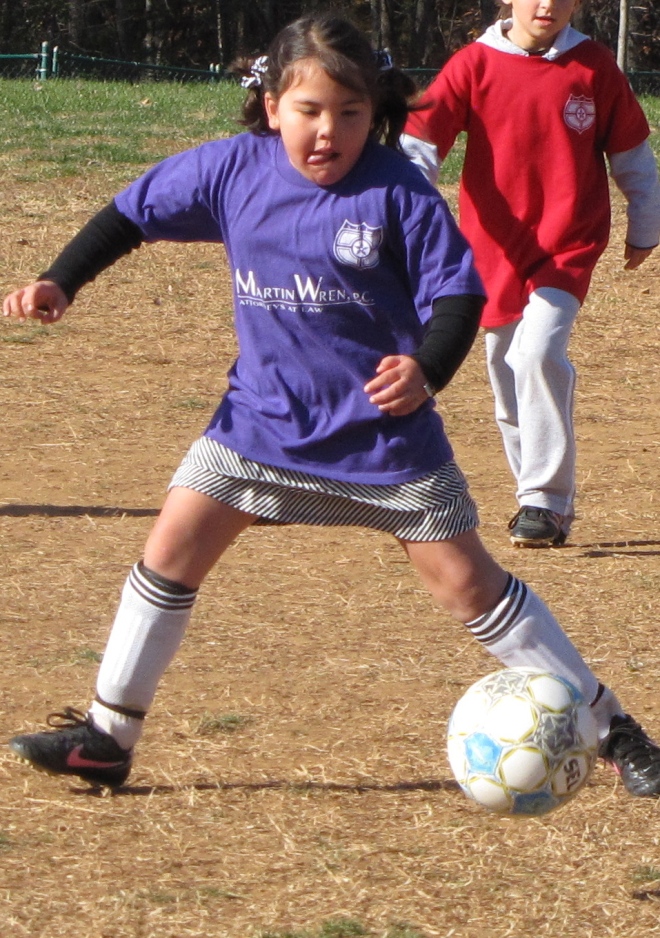 Anybody else share “genetic garbage” traits with their family members?

Happy Weekend! It looks like we’re going to get walloped with snow in our corner of the world. Good thing I have a coat to wear! ; )

I was driving my daughter home from a birthday party this weekend when she heaved a heavy sigh and groaned, “When will this shutdown end?!“

I chuckled and asked my 13-year-old, “How, in any way, are you being affected by the government shutdown?”

“Because I’m a human being with compassion for other people I’ve read about in the news, who can’t buy the insulin they need to survive, for example, because they’re not getting paid…Because I feel terrible for people who desperately need their paychecks for things like food, or to pay their rent or mortgage…”

No man is an island entire of itself; every man is a piece of the continent, a part of the main; if a clod be washed away by the sea, Europe is the less, as well as if a promontory were, as well as any manner of thy friends or of thine own were; any man’s death diminishes me, because I am involved in mankind. And therefore never send to know for whom the bell tolls; it tolls for thee.

My husband sings professionally for a church just down the road from where we live. I take my kids to another church where they were baptized and have been raised. Every now and then my husband gives us a very good reason why we should visit his church… 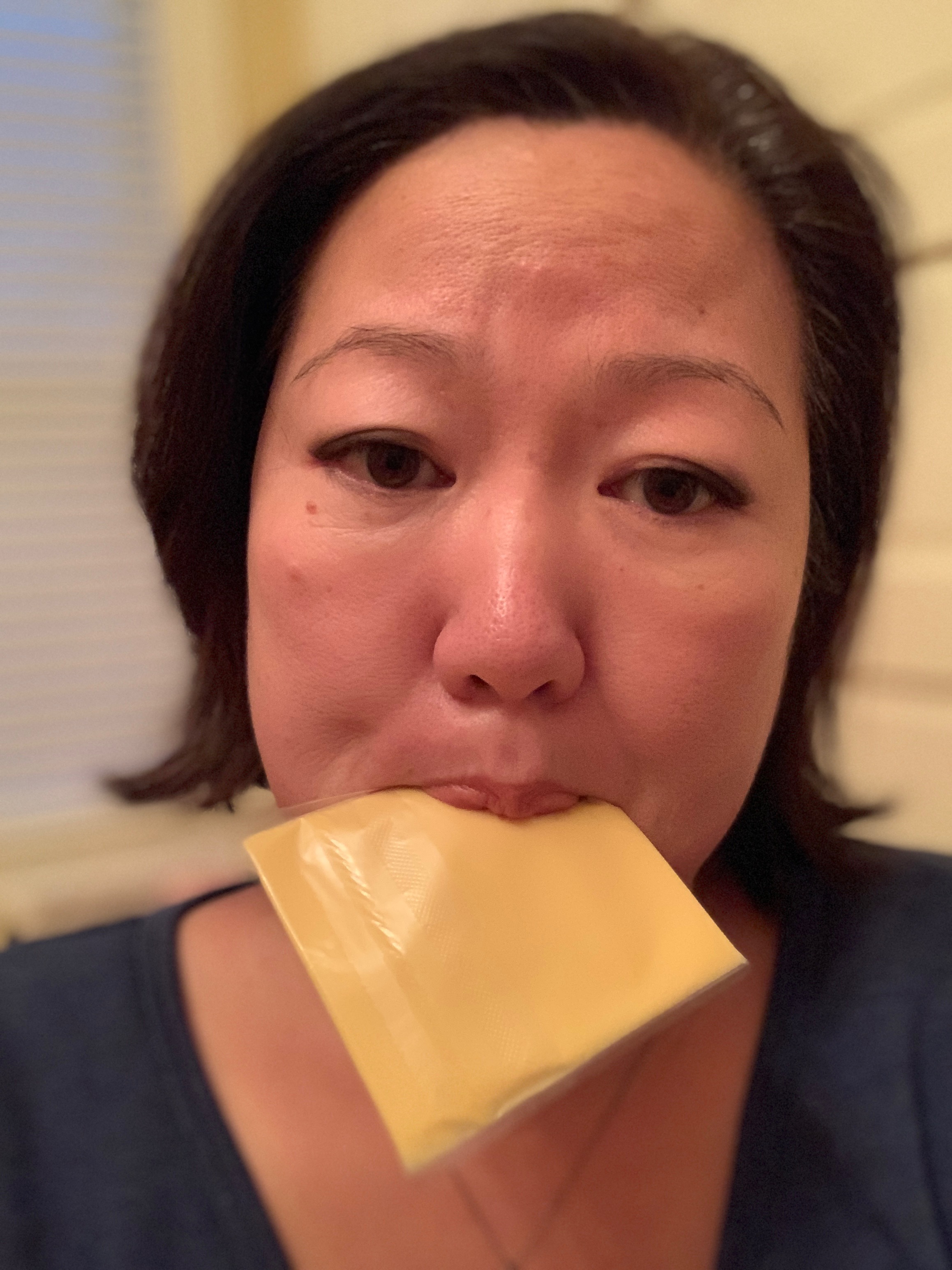 Yesterday I had my scheduled “Be Well” visit, one of the many annoying assaults to my dignity that I must endure, like a pigeon pecking a button for a pellet, to earn a lousy (taxable) $600.

A slim, bright-eyed doctor strode into the room. He looked all of twelve years old.

“So! Let’s talk about your Be Well goals for the year!”

I was taken aback. “Oh! I actually have been thinking about those all week, but I’m still working on them. I promise I’ll have them by my next phone appointment with my Be Well Advocate though.”

“Mmmhmmm,” he said with his fingers poised over the keyboard, “But I have to put them into the system, so let’s go ahead and work on those now.”

“Good one!” he said with an encouraging smile, “One more.”

“I’m blanking. Do you have any suggestions for me?” I asked.

“How about…I will meditate three times a week for five minutes. That seems easy enough, right?”

“Yes, but…shouldn’t it be something that I would realistically do?”

I continued to muse out loud, “I know I should lose some weight, but I also feel like the goal should be something that would actually be achievable…”

“Eat a greater proportion of vegetables at meals?”

Exasperating medical health professionals is one of my special talents.

Until this year, it used to be the case that instead of going to a doctor, the Be Well program would require you to move through stations set up around a large conference room. At one station you would get weighed and measured. At another station you would get your blood drawn. At the final station, a nurse would interpret your results and give you recommendations to improve your health.

One year, a well-meaning nurse tried to get to the bottom of my high cholesterol numbers.

“Do you eat a lot of fried foods?”

He started to look at me with suspicion.

His eyes narrowed and he asked, “Fatty foods?”

“Not really, although…I do eat cheese,” I conceded.

The nurse pounced: “You MUST. EAT. LESS. CHEESE.”

Now, under pressure to come up with something, anything, I blurted out to the doctor: “OK, I have my second goal!” Forgetting all my scruples about setting a goal that was both realistic and achievable I announced: “I will eat less cheese.” I cringed as the words spilled from my lips, fully confident that no stupider-sounding goal had ever been set in the history of the universe.

Doogie Howser exacted his revenge on me.

“Hah! That’s the exact opposite of MY goal. My goal is to eat MORE cheese. I fantasize about quitting medicine and becoming a cheesemaker! But my wife says I have to pay off all my med school loans first.”

Well, I suppose we all have our crosses to bear.

On the first night of 2019 I went to bed crowing with happiness. I waltzed into the bedroom to find my husband, already recumbent in bed. I found myself crooning an impromptu love song to him…My simple hymn of jubilation had only two phrases, sung over and over again in a sing-song lilt:

“We got our car inspection done! We finished the FAFSA form!”

We gave each other a high five and went to bed…me, still aflutter with the victory of long-dreaded and onerous administrative tasks checked off my list, he, dreaming of the weighted blanket he had just ordered for himself.

Bring on 2019! Bring on the second half century of my life! Clearly, I’m primed and ready to go!