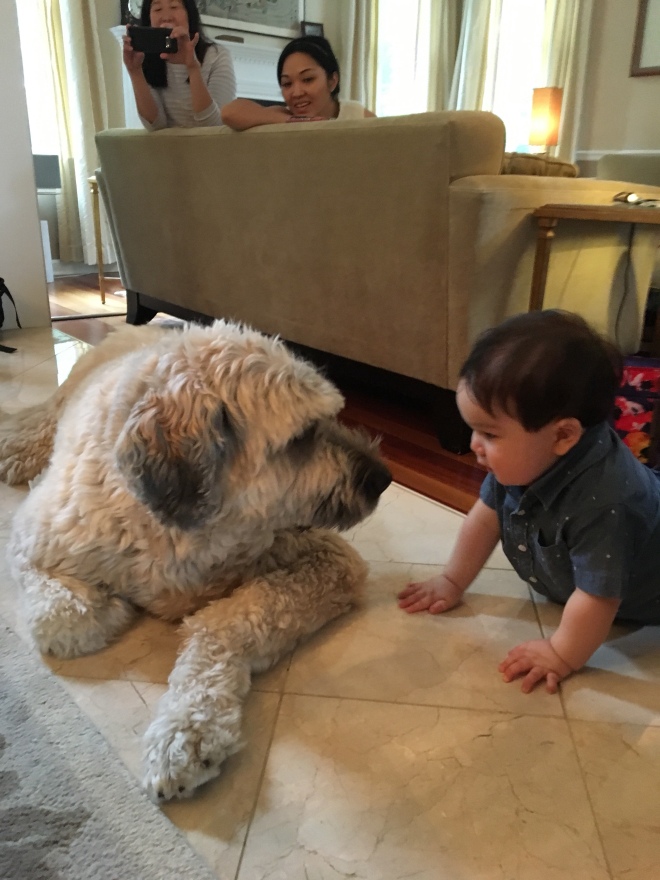 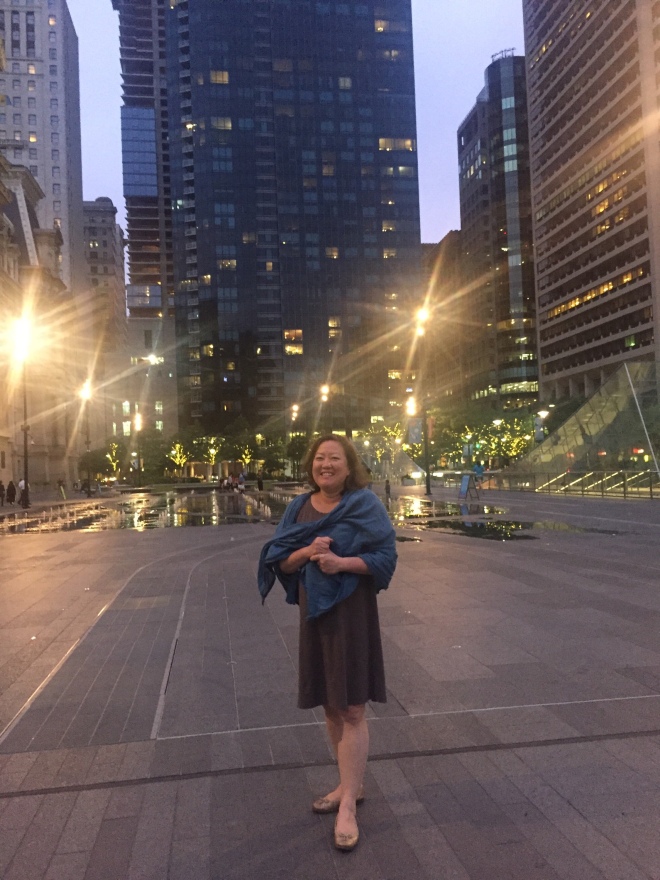 We had to clear out of our parking spots at UVA for graduation by 12, so I got to spend the afternoon playing in my garden. In the pouring rain. 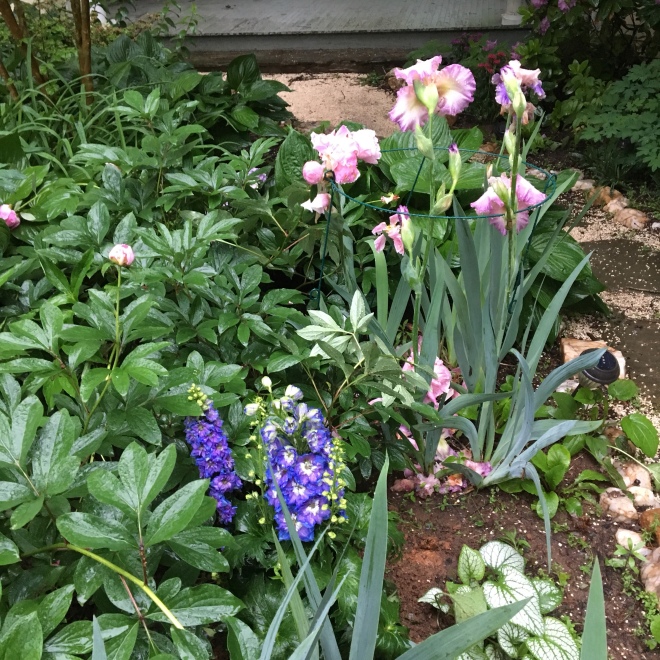 This young man had his very last full day of high school.

His younger siblings celebrated the end of the week with a game of basketball.
In the pouring rain.

Hanging out with my beloved book group was a fitting end to a near perfect day.

We took the kids to the Alamo Cinema Drafthouse to see a movie.

“Anything but the Avengers!” my husband insisted. “I don’t ever want to see another superhero movie again.”

In the immortal words of the Rolling Stones, “You can’t always get what you want…”

We did end up seeing a superhero movie after all.

RBG – the documentary about Ruth Bader Ginsburg gives you hope for the world by showing that there is at least one actual superhero living among us here on earth.

That darn tree is still leaning precariously. Hoping to get it and the tree it’s using as a crutch taken down and away by the end of the week. I’m sad about the trees, but hopefully more sun will bring more flowers. 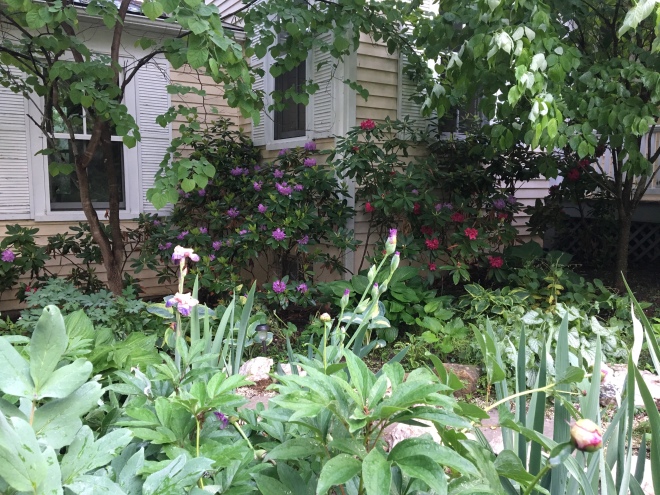 My husband took my daughter to her soccer game in Blacksburg this Saturday. I played hooky and spent the day pottering around in my garden, getting a few more patches of poison ivy rashes on my legs. Meanwhile, my son took himself to his own soccer game, but had to come home early, having badly sprained his ankle. He’ll have to be on crutches for a week or so.

While he convalesced indoors, I kept being drawn outside to admire the flowers. I’ve been especially enamored with the irises I planted a couple years ago. They’ve finally come into their own this year… 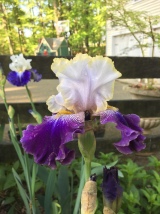 I was annoyed, however, to see that a bright orange interloper had popped up in the flower bed. 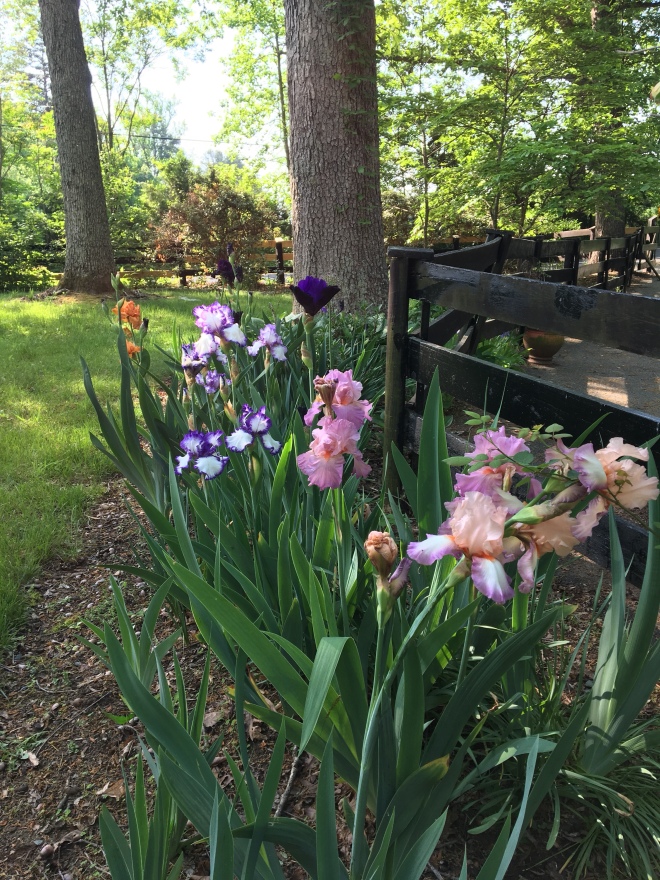 My daughter noticed it immediately and asked “What’s that orange flower?!”

“That’s an iris. They must have sent it by accident with my order.”

I was just about to tell her that I was going to yank it out and replant it in some obscure patch in the backyard when she gushed, “I LOVE it! It’s SO cute!” So, I guess it’s staying…

What’s NOT staying is the huge oak tree, pictured upright just beyond the orange iris in the previous picture. Today it looks like this:

Yesterday, I drove home from work through a powerful storm. It was late and I was so thoroughly exhausted that I somehow managed to pull into the driveway without even noticing that the tree had fallen into another huge oak tree, whose top sheared off and took down the fence with it, and fell into the road, blocking traffic coming from the other direction. When I came through the door, the kids came running up from the basement, where they had been cowering in fear.

“Thank goodness you’re home!!! Did you see the tree?!” my daughter asked breathlessly.

“YOU DIDN’T NOTICE THE TREE?!”

She had to drag me to the window to point out the obvious.

We sang in the choir all together for the last time. During the service there was a big, mushy send-off for the graduating seniors, including my son, who is heading to college in New York this fall. I was reduced to a quivering mass of exposed nerves, tears, and snot right up front and center in the choir loft. I’m sure I stuck out like a gaudy orange flower, and not in a cute way either. 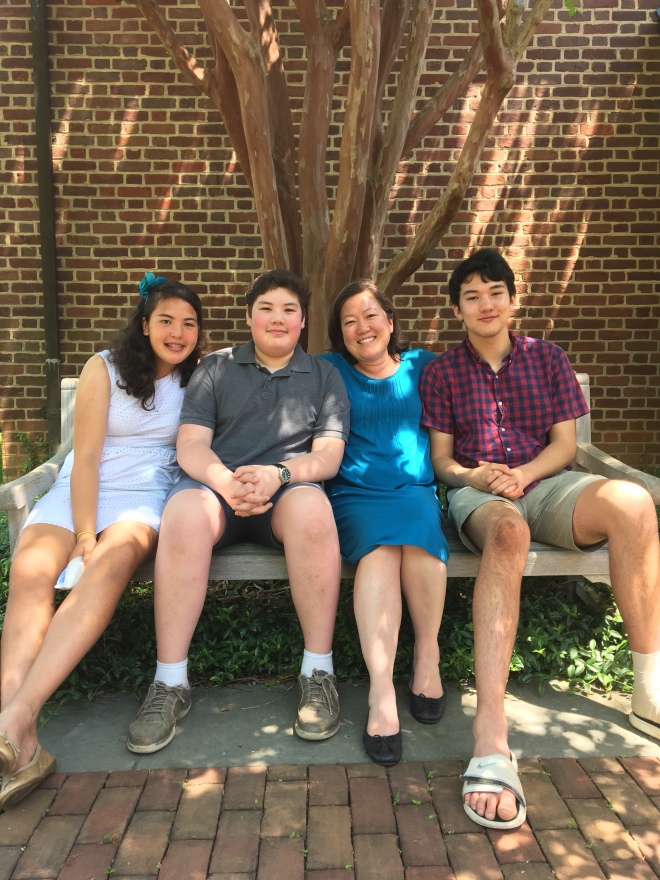