We are afflicted in every way, but not crushed; perplexed, but not driven to despair; persecuted, but not forsaken; struck down, but not destroyed. 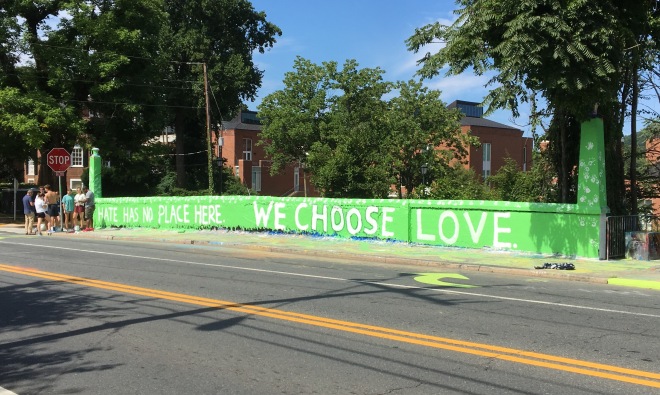 A couple weeks ago a friend and I were discussing the White Nationalist rally that was coming to Charlottesville when it was still just a looming menace.

“Will you leave town?” my friend asked me.

“Why should I?” I replied. “Charlottesville is my town. I live there.”

The day we dreaded arrived and it was a darker day than I could have imagined.

The night before we watched in disbelief as hundreds of tiki-torch bearing hate mongers paraded around our town like so many teeming cockroaches. We felt defiled as we watched them march around the Rotunda, which Jefferson had envisioned to be a Temple of Enlightenment. We were sickened to watch them assault our students.

We spent the next morning like any other Saturday, but we held our breaths and anxiously, futilely hoped for a peaceful day. We drove our kids to soccer and their piano lessons. We waited for a piano to be delivered to our house. All the while we followed the events that were unfolding in our town. We anxiously watched for posts from our friends, neighbors, and clergy, who were bravely trying to keep the peace and spread a message of love to counter the message of hatred and divisiveness brought in by outsiders. We reeled in horror as we watched the footage of the terror attack on the Downtown Mall that resulted in the death of one and injuries to many.

In the afternoon my boys asked if they could drive down to the river to go fishing. I readily agreed, thinking it would be good for them to get outside and away from it all, but then immediately regretted it. They were so excited about their excursion that I didn’t have the heart to make them stay home. I did dampen their high spirits and detain them with stern warnings to be cautious: “Swear to me you’ll leave right away if you see sketchy people hanging around by the river. There are a lot of really bad people in Charlottesville today. They’re brawling in the streets.”

And then I heard myself saying: “It might be dangerous for you, because you don’t look white.”

As soon as the words left my mouth, I couldn’t believe they had. The primal fear I felt for the safety of my children filled me with shock mingled with sorrow, mingled with rage. Until yesterday, the progressive bubble that is Charlottesville had sheltered me from the fear people of color experience around the country on a daily basis.

“We’re not going to church tomorrow,” my husband announced later that day, “It’s a well-known liberal church right next to the university and it’s not safe to be there.” I’m going to be honest…for half a minute, I was glad to have an excuse to sleep in for a change. But then I came to my senses. Oh, HELL no. This is OUR town for God’s sake. I would not be intimidated from going to church of all places.

I thought the church would be empty, but it was a full house this morning. The pews were full of brokenhearted, but not broken people. Through tears we sang and prayed. We prayed for Heather Heyer, who lost her life yesterday. We prayed for the police helicopter pilots, who died in the line of duty. We prayed for all the injured, and for the doctors and nurses who were caring for them in our local hospitals. We prayed for all of the people in our community, whose hearts, like ours, were breaking.

You know who else we prayed for?

We prayed for the “children of God,” who came to our beautiful little town yesterday to sow hatred and wreak havoc.

Can you imagine that? That’s Charlottesville, the town I know and love.

God help us all.

2 thoughts on “We are not destroyed.”