When it comes to my parents, the only thing we’ve ever been able to count on for sure, is that we should expect the unexpected.

“Tell your teachers this is your last week of school. We’re moving to Virginia next week.”

“Thanks for picking us up at the airport, but we’re going to drive to Tennessee now. See you at the end of the week.” (At 11 pm).

“Surprise! We decided to come home a few days early!” (At 3 am the next day).

“We’ve decided to move to Korea.”

“We changed our minds, we’re not going to stay for dinner. What? A two and a half hour drive is no big deal. We got to see you for a whole fifteen minutes!”

One might assume that after a lifetime of dealing with this kind of erratic behavior, one would give up trying to figure out their next move. Perhaps if one weren’t so lumpy and stupid, one would have given up trying, years ago. But every morning of the week we spent in Korea, my sister and I conferred with our parents in a vain attempt to definitively pin down the particulars of the schedule for the day. Every day my parents would say one thing and then casually drop bombshells left and right as the day wore on.

On Wednesday, we knew we would be attending the annual Founder’s Day Festival at the university (in honor of my grandfather), and that my father would be giving some sort of speech. 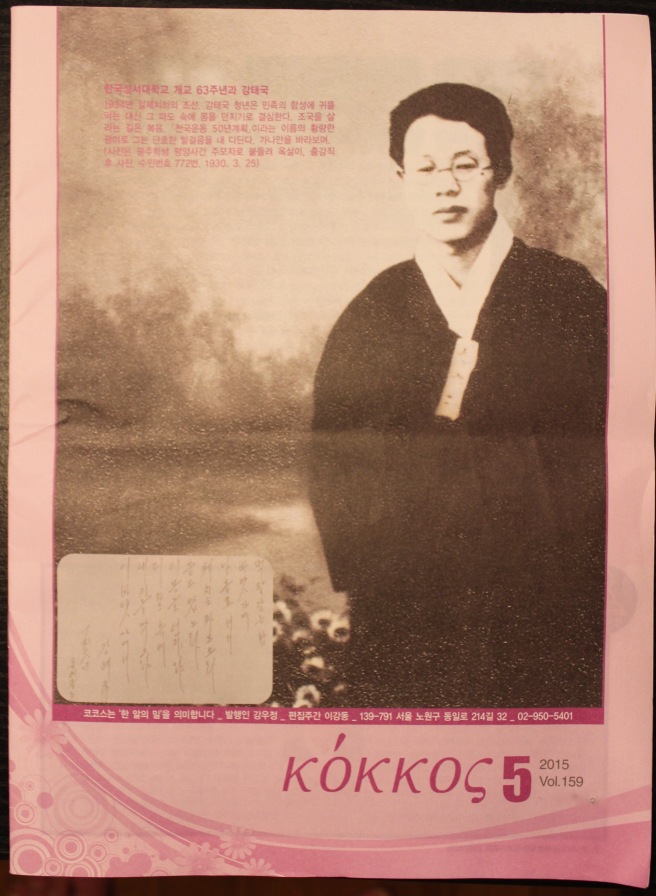 That morning my dad said, “Oh, by the way, they’re giving me an honorary degree today. They want you girls to go up on stage and help me with my cap and gown.”

“Ummm, Dad, is that really a good idea? We don’t speak Korean. We’ll have no idea what to do. We’re going to make complete fools of ourselves. We wouldn’t want to embarrass you in front of all those peop-”

We begged our mom to intercede on our behalf…to explain that we were Lumpy and Stupid and could not be trusted to perform in such a public venue on such an important occasion. Not only did she refuse to help us, she craftily seated herself waaaaaaaay in the back of the auditorium, so as to escape notice herself. 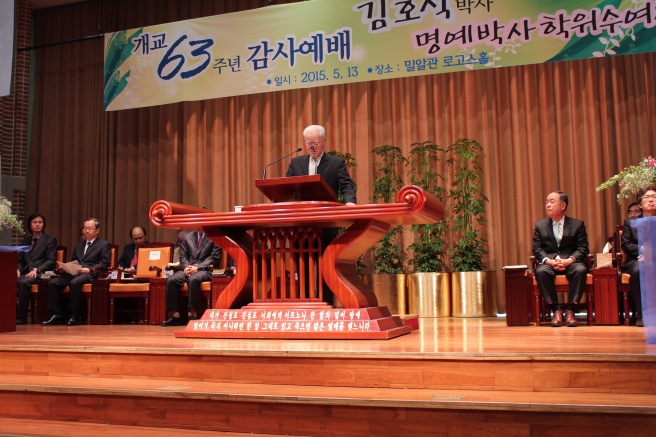 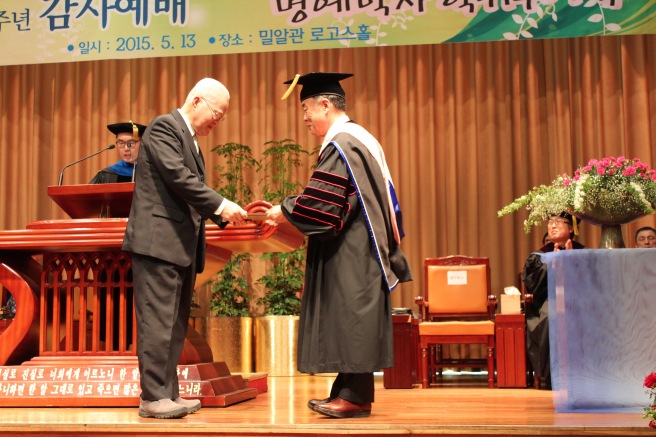 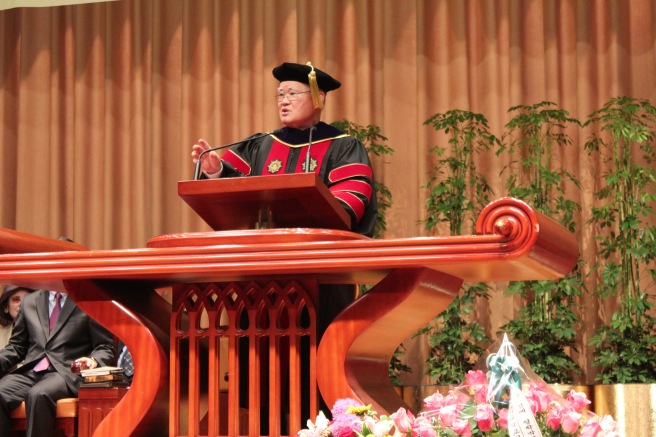 It was not terrible.

My sister was not introduced, as she had been all week long, as a “good eater who as a little girl could eat an entire chicken all by herself, and especially loved the greasy skin which she’d rip off with her bare hands.”

When they introduced me, the lame joke I had once made, that after watching a few Korean dramas, I was now fluent enough in Korean to be the next university president, was not repeated as my mother insisted on doing over and over to my horror and everlasting shame to people, who never once cracked a smile at its retelling, and instead politely nodded their heads as they struggled not to betray their shocked disapproval at the rapacious, grasping, (lumpy and stupid) daughter who had made such an audacious claim.

We did not trip on the stairs on our way to the stage.

We bowed awkwardly, and maybe only looked a little bit like boobs as we did so.

We fumbled with the zipper for only a few seconds. 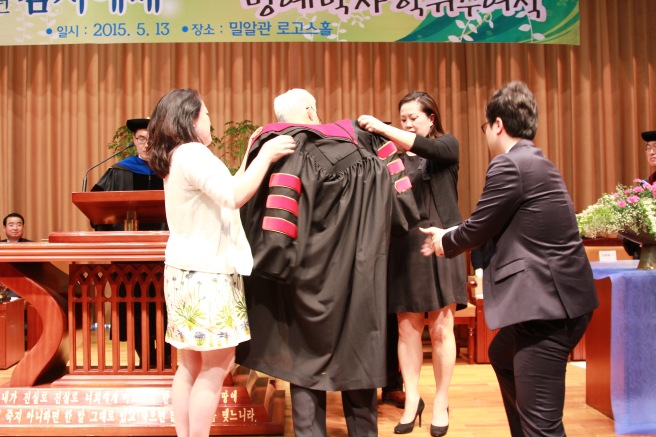 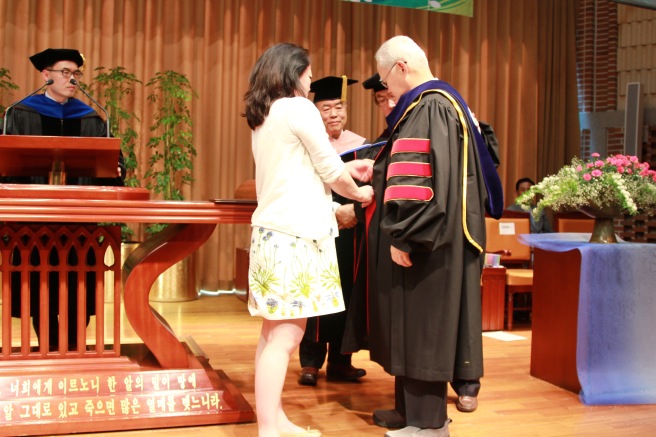 We placed the cap on our dad’s head more or less the right way. 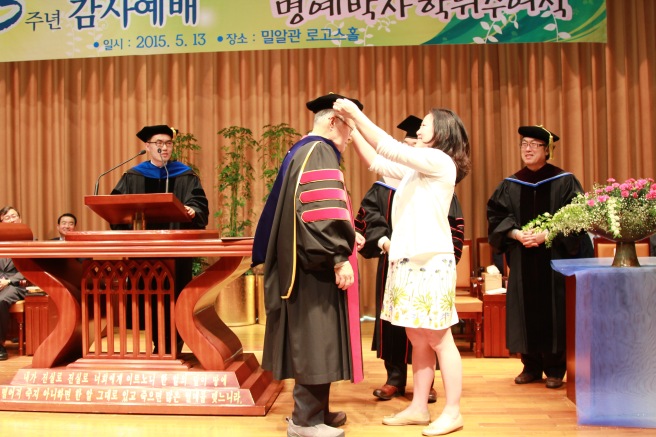 We hugged our dad when we were ordered to in a stage whisper. 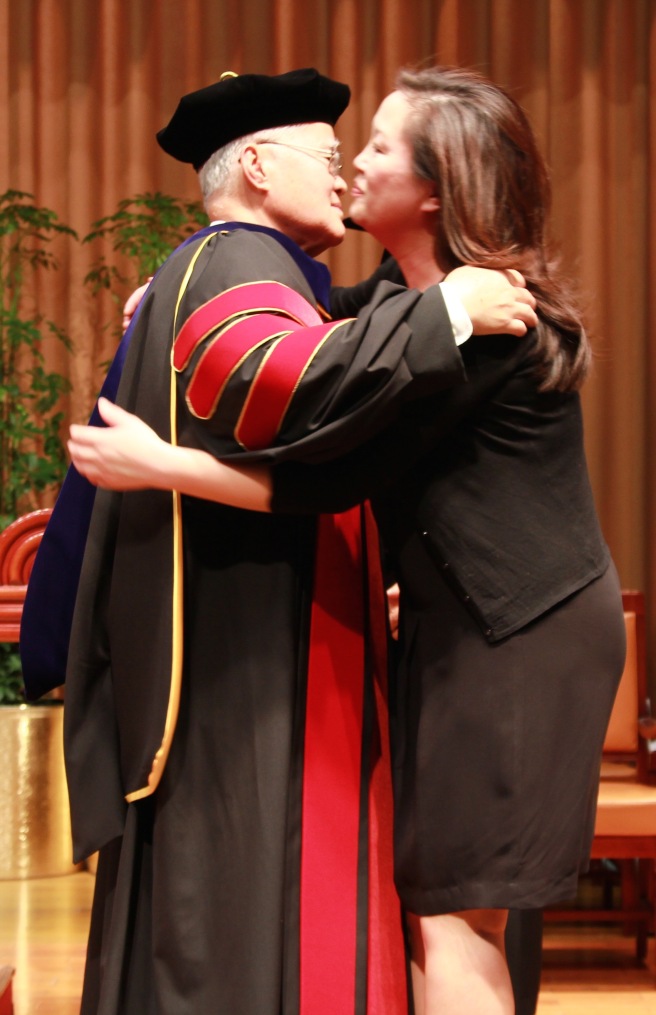 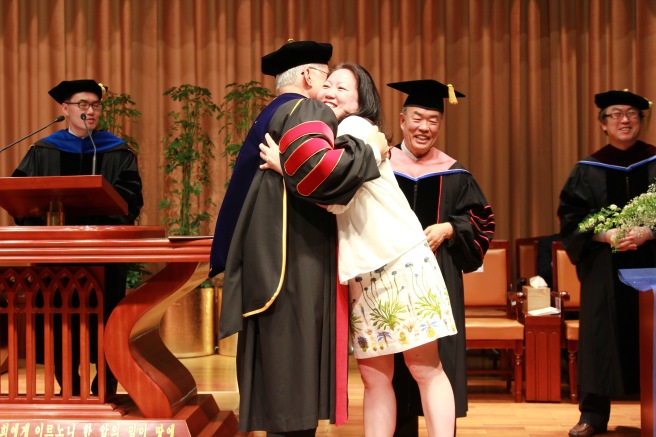 We looked only as stiff and awkward as we usually do, AND there was no food stuck between my teeth when we posed for photos. 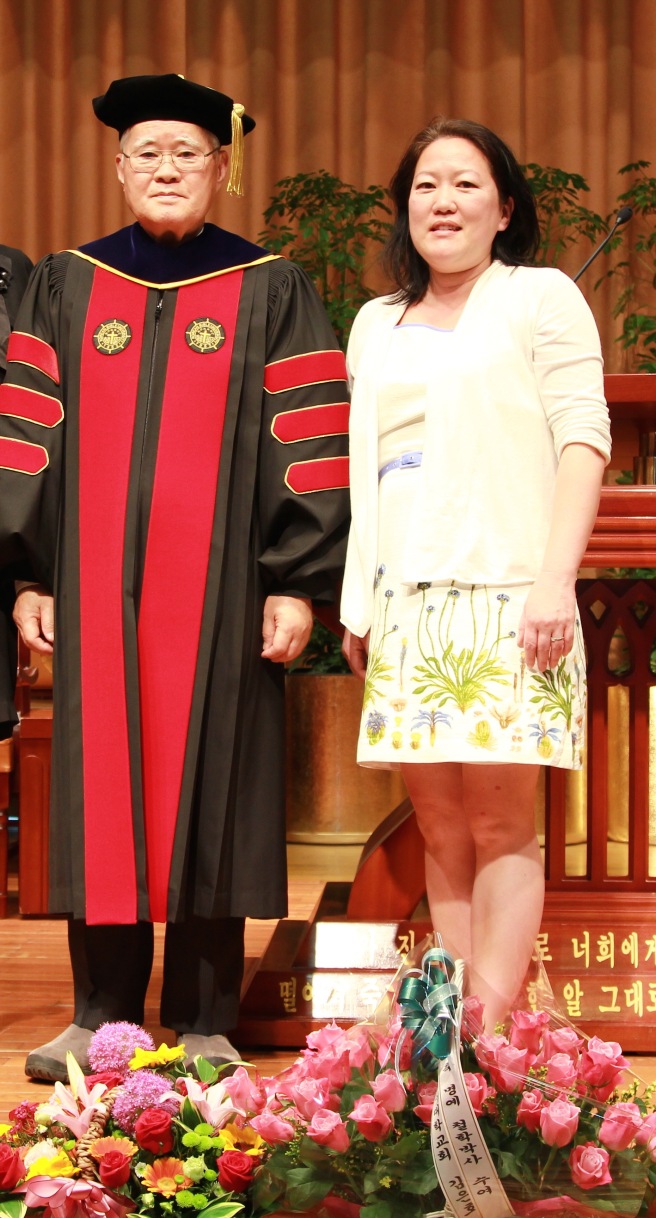 My mom did not escape with impunity. They managed to hunt her down… 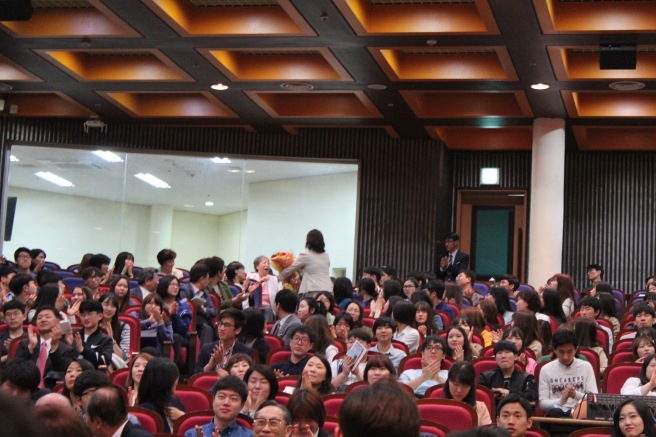 I exacted my revenge by taking photos of the takedown: 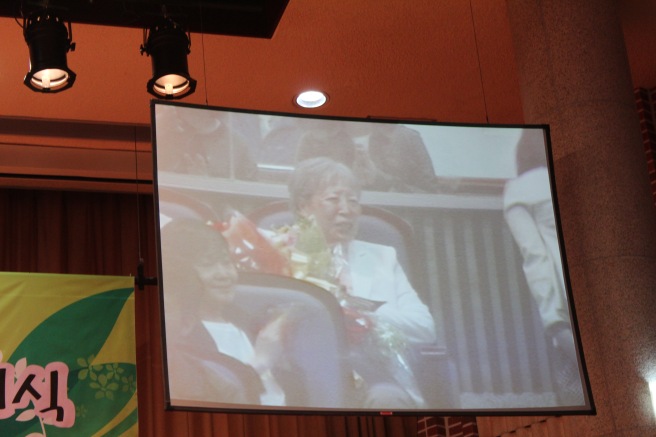 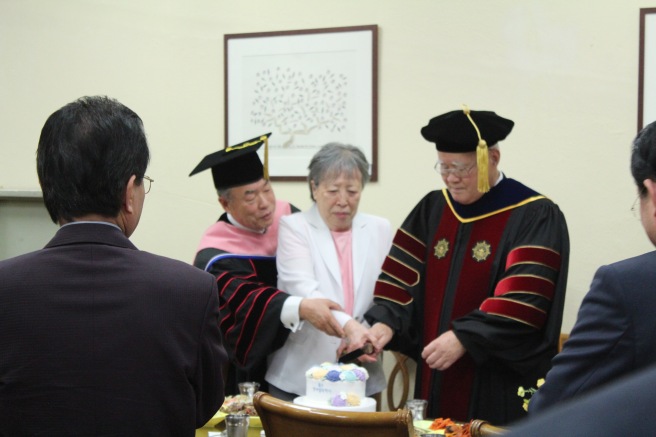 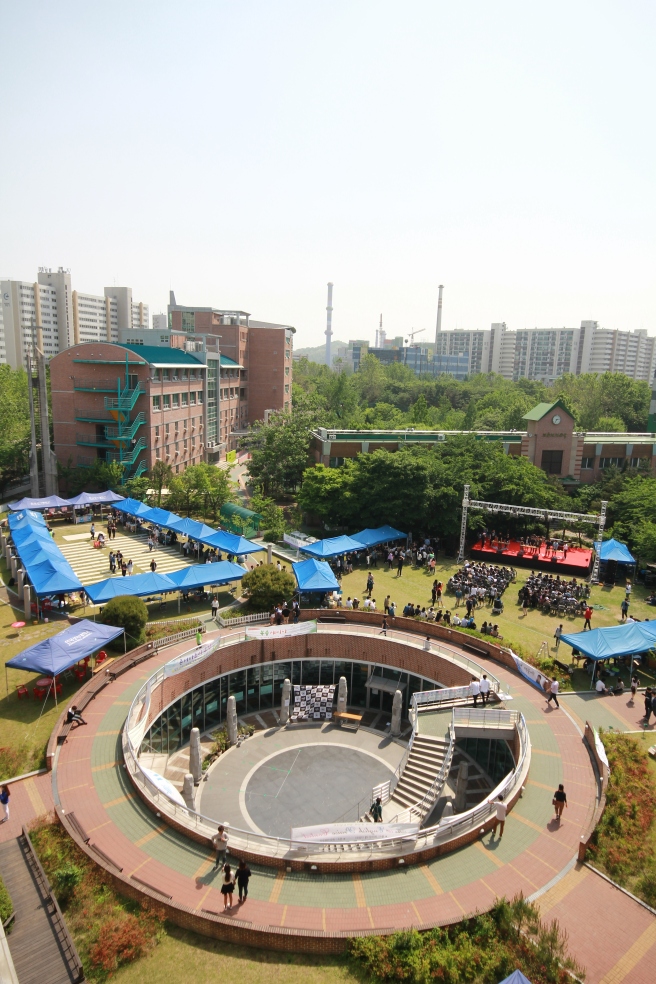 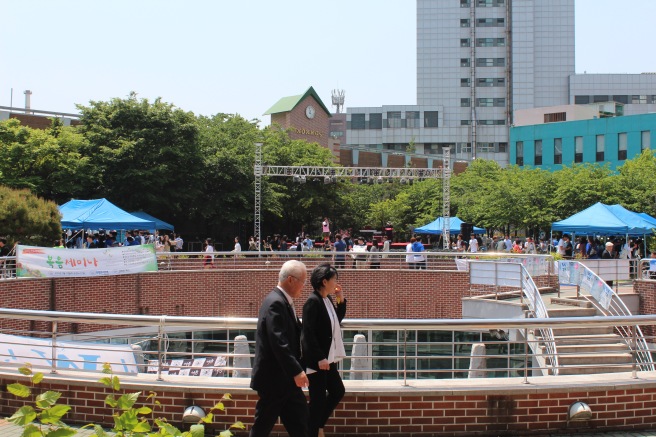 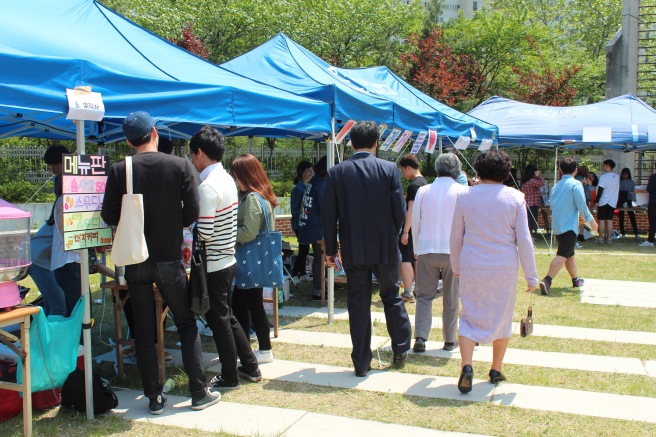 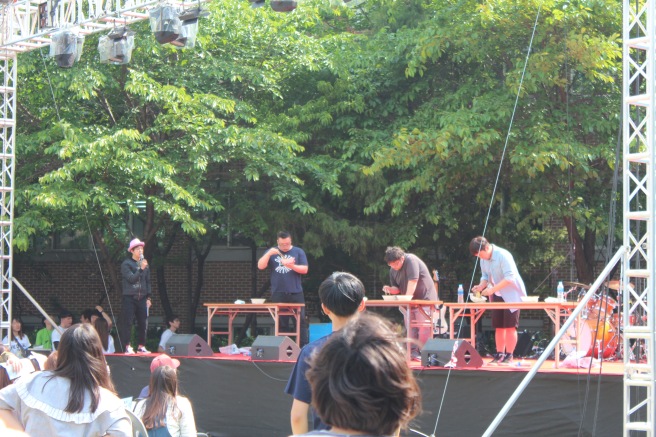 After the ceremony, we celebrated our small victory with dinner: 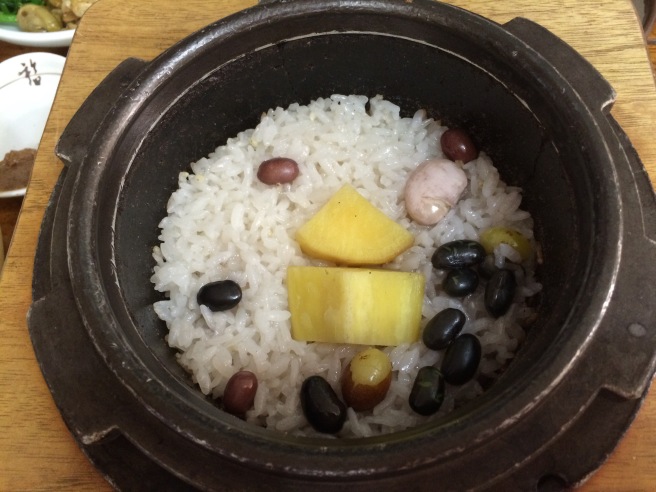 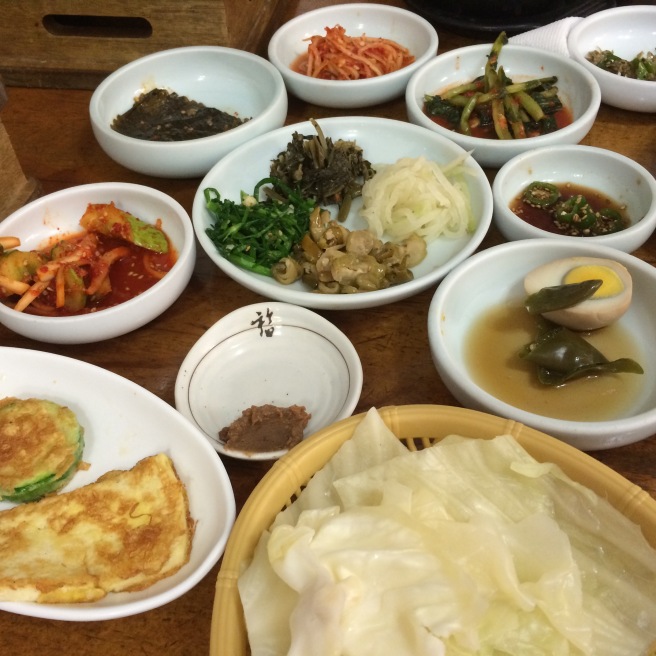 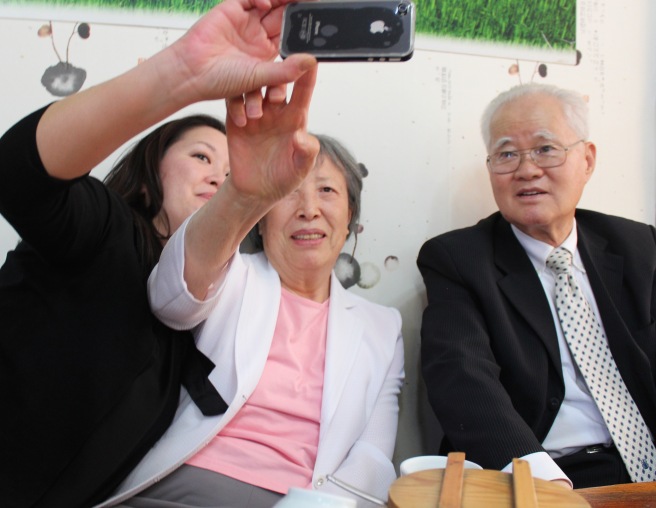 And just a little more revenge: 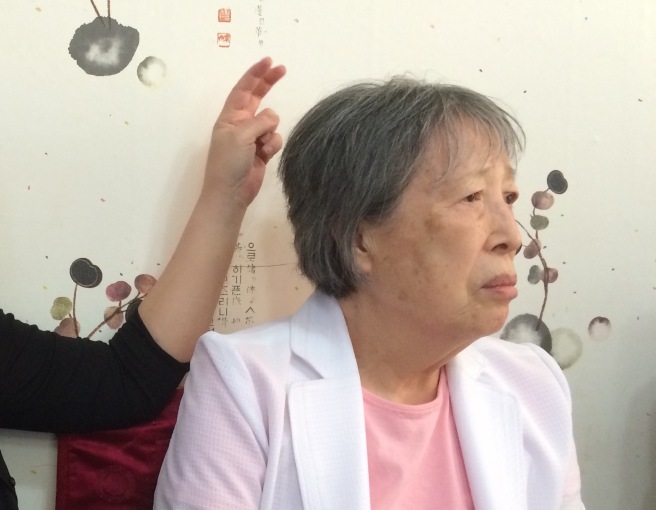