On Monday we drove two hours north of Seoul to visit the graves of my maternal grandparents and uncle. There we met up with my mother’s brother and his wife, as well as some others, who accompanied them.

The Korean tradition is for graves to be sited on mountainsides. My grandfather’s church bought this mountain for their burial ground. The last time we visited the gravesite, my mother was so ill we thought it would be the last time she would be able to make the trip up the mountain. On that day, (was it six or seven years ago?), we ran into someone she recognized from her father’s church who was there tending to the graves. To our surprise and dismay she called to him and pointed out the spot she had picked, not too far from her parents, where she wanted to be buried. We were all desperately sad that day. It was one of the most painful days of my life.

It was a somber occasion this time, but I could tell it meant the world to my mother to be able to visit her parents’ and beloved brother’s graves again. It meant the world to us that we could be there with her. I think back to the last time we were there, and I realize that life is so unpredictable. It sucker punches you; it showers you with unexpected blessings. All you can do is roll with it. Kind of like this trip, actually. Every morning my sister and I naively ask what the plan for the day is. My parents tell us what we’ll be doing – and it never, never goes as they said it would…We’re rolling with it. 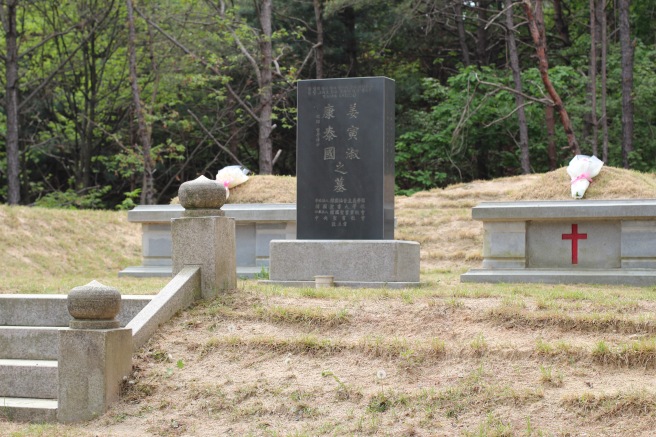 The last time we were here, my dad pointed out where our names are carved into the stone marker between my grandparents’ two graves. This time my mom was able to point them out to us herself: 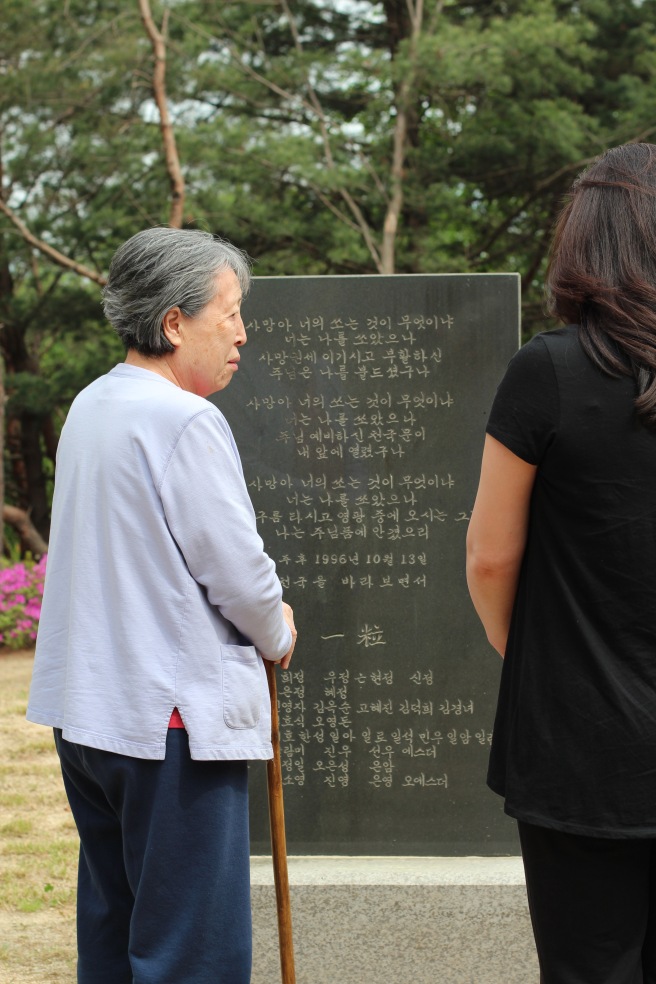 With her cane, she pointed out my oldest sister’s name, my second sister’s name directly under hers, and mine below theirs.

She looked puzzled as she continued to read the names of all of my grandparents’ children and their children inscribed upon the stone.

“Oh, there it is!” she said as she pointed out our brother’s name and laughed. “They put it higher on the stone, because he’s a boy.”

We headed down the mountain to visit my uncle’s grave. One of the kind gentlemen in our party did his best to sweep aside the slippery dry pine needles so my mom wouldn’t fall. 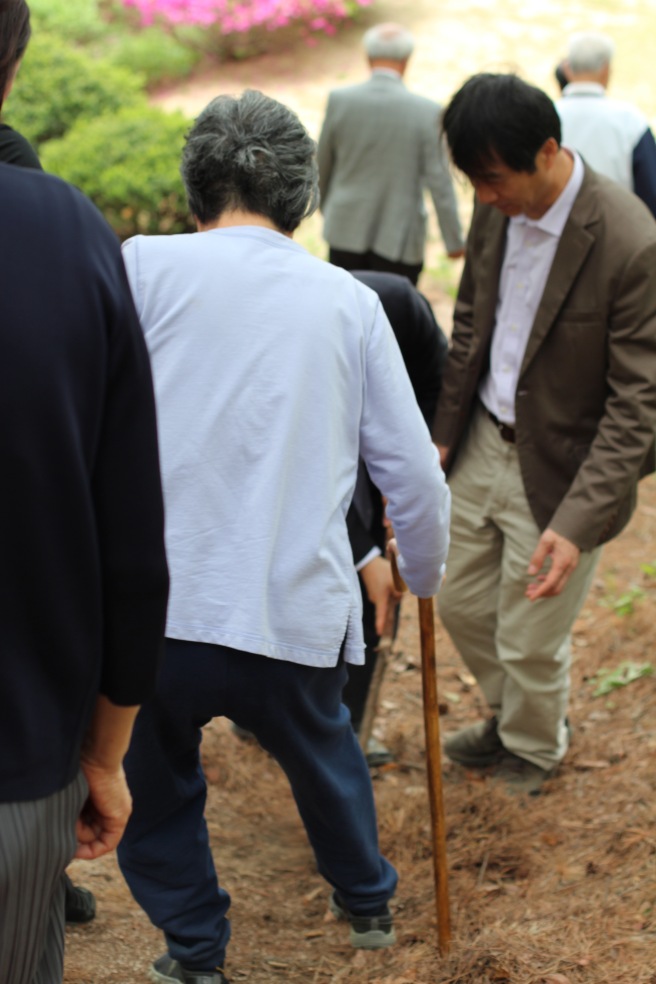 That’s my uncle and aunt to the left, and my parents to the right. 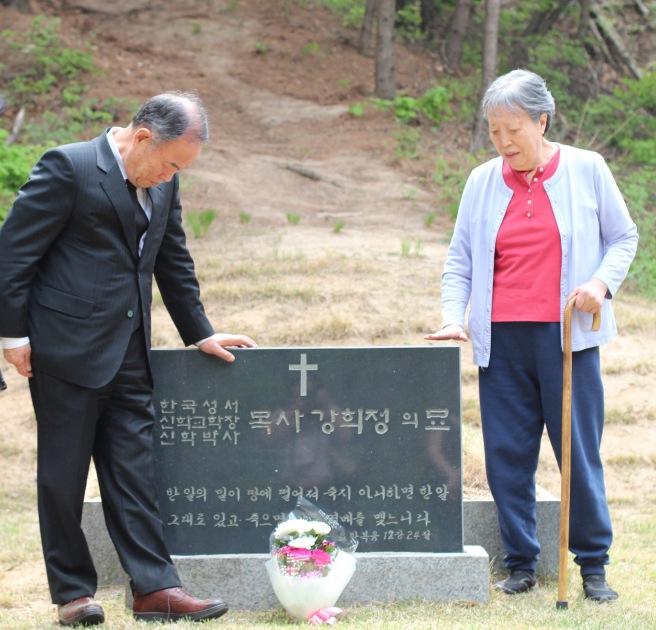 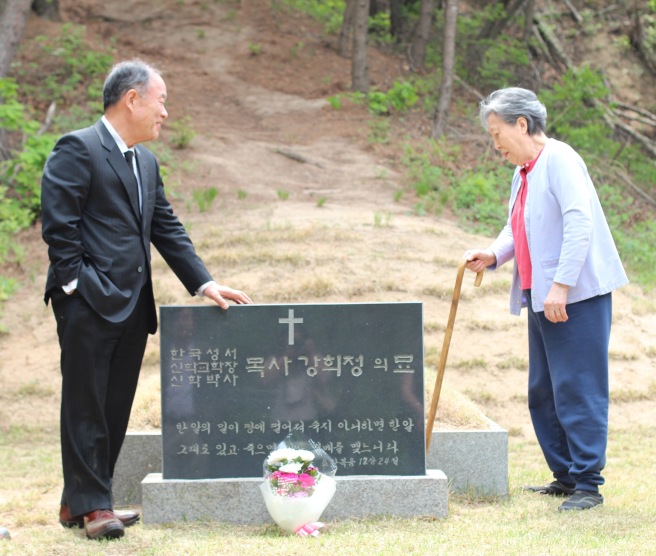 After laying the flowers we had brought and saying a prayer, we drove on a short distance to my grandfather’s mountain. He bought this property, located fairly near the DMZ, shortly after the Korean War. After the war, it had been completely denuded of all trees. He spent the rest of his life replanting trees on that mountain like a Korean Johnny Appleseed. My mother remembers being taken there often with her siblings to help him plant trees. After he founded a university, it became a tradition for his students to plant trees there as well. I remember hearing as a child long ago, that someone who had been camping on the property, accidentally burned down a huge swathe of trees. For my grandfather it was years of his life and effort going up in flames. He was absolutely devastated.

Today the mountain is being used as a retreat center for the students who attend my grandfather’s university, located in the middle of Seoul. Two hours away from the city, they come to a mountain lush with trees and vegetation. We drove along rough, narrow roads lined with birch saplings that have been recently planted by students and stopped to admire the view. We could hear nothing but the sound of birds singing in the trees. 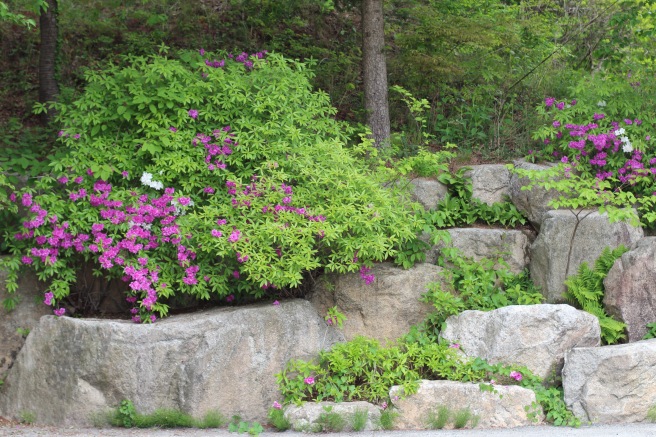 We drove on to find lunch at a “mushroom shabu shabu restaurant” out in the middle of nowhere.

If only I could bring home one of these Korean style doghouses!

Most of the clientele were army soldiers stationed near the DMZ. I looked at all the identical black boots that had been taken off and left by the dining room, (the custom in Korea), and wondered how they would figure out whose were whose after lunch.

Aftermath of the soldiers’ meal. 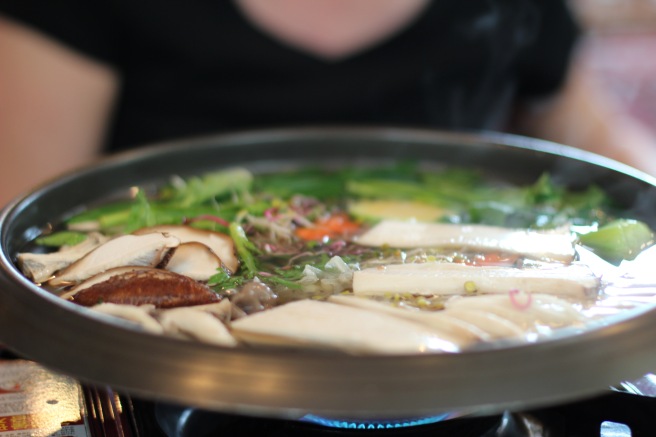 After all the mushrooms and vegetables are finished, and you think it’s very possible that you might explode from eating too much, noodles are added to the broth to finish off the meal.

You manage to finish the noodles and are surprised and relieved to discover that although your stomach is grossly distended, it is still intact.

And then they bring a huge bowl of rice to the table and add it to the little broth there is left. They continue to stir it until it acquires the consistency of delicious Korean risotto…

…which you can’t NOT eat, obviously.

After all of this, I thought for sure my mother would want to drive the two hours back to the city and collapse in a heap until the next morning. As is so often the case, I was wrong.

As we came to a stop here:

…my sister and I gave each other a wary look. That morning when we had asked my parents what the day’s itinerary would be, we were told we would visit the gravesite and return to the city, period. My parents wanted to stop at this nursery: 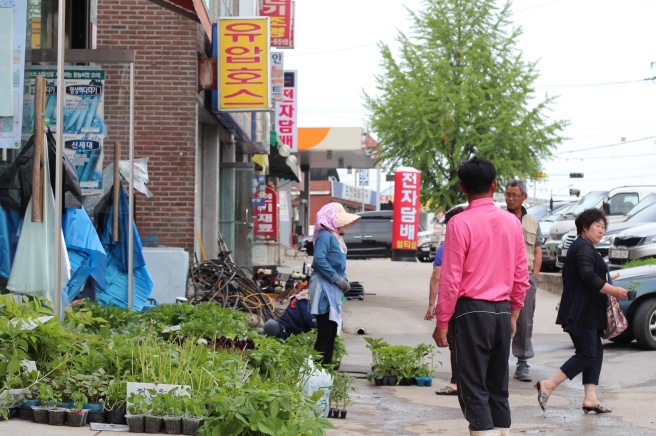 where they were selling dandelions in flats alongside other less identifiable plants: 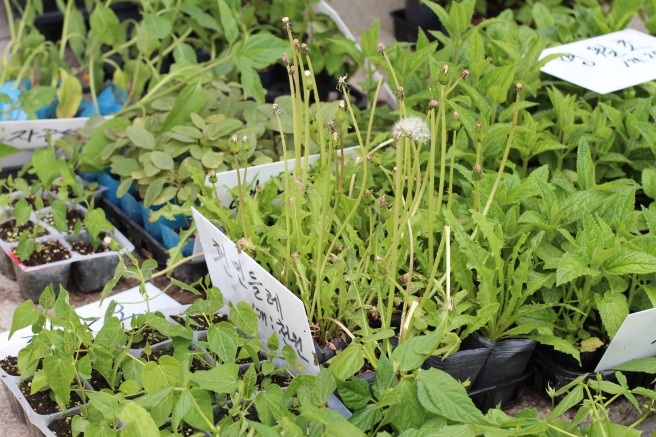 They wanted these to buy some seeds to plant a little of Korea in their own backyard in America: 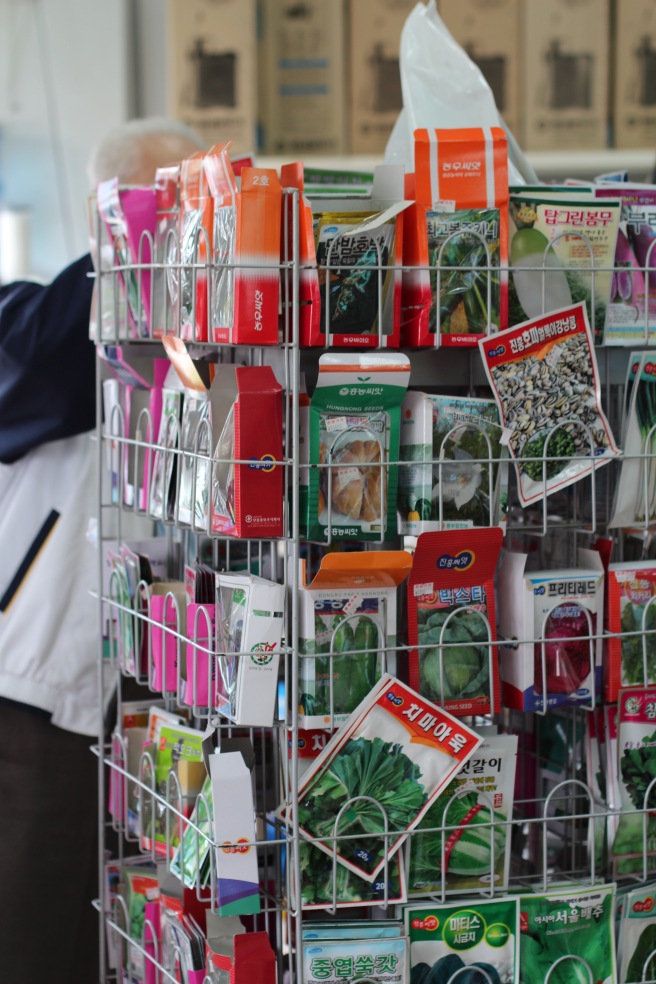 Now, surely, the day was done.

We stopped one more time at a store called Hanaro. It’s kind of like Walmart. And kind of not: 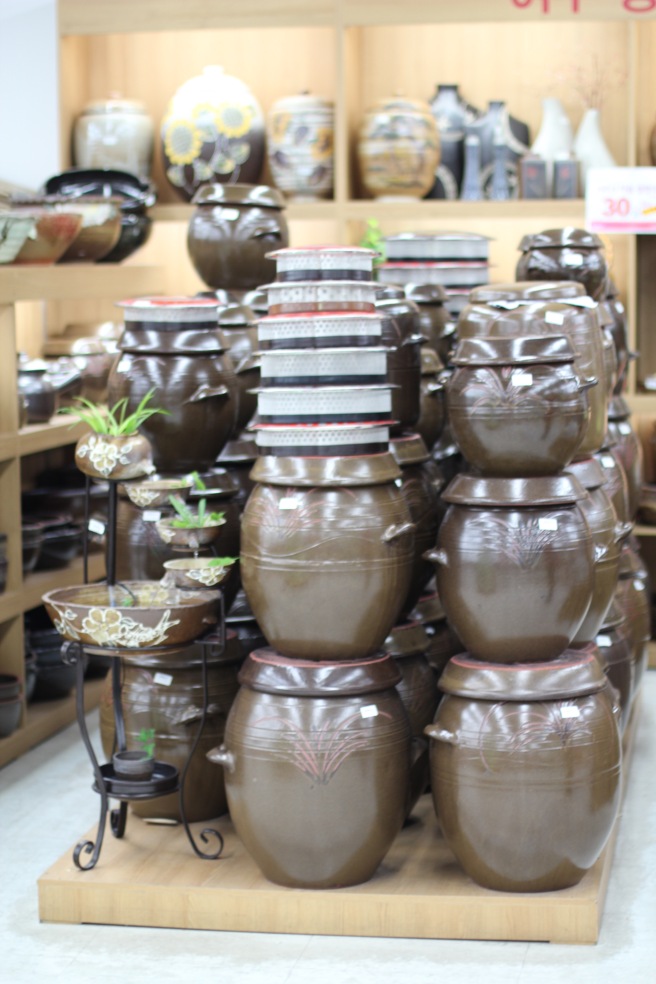 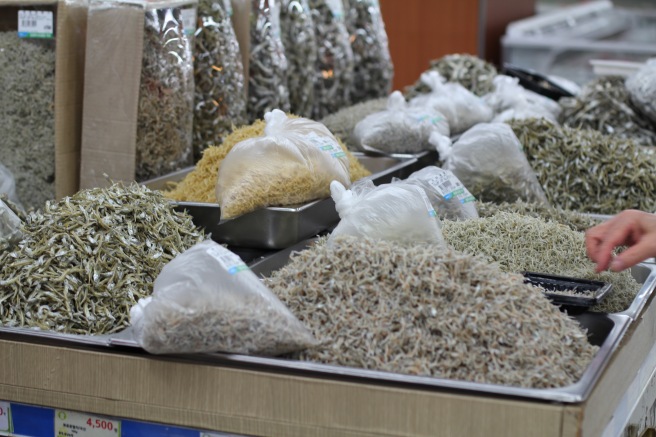 “Uh, mom, there’s a little place not too far from where you live in Virginia called H Mart where you can buy all of these things…” my sister said.

Last night my sister and I wandered around the Lotte Department store Duty Free section and witnessed a shopping frenzy like we had never seen before. Bargain-hunters, the vast majority of them Chinese, had brought gigantic suitcases to the store and were stuffing them full of fancy Korean cosmetics they had stood in long lines waiting to buy. My mom’s entire suitcase is going to be crammed full of dried fish and seaweed. 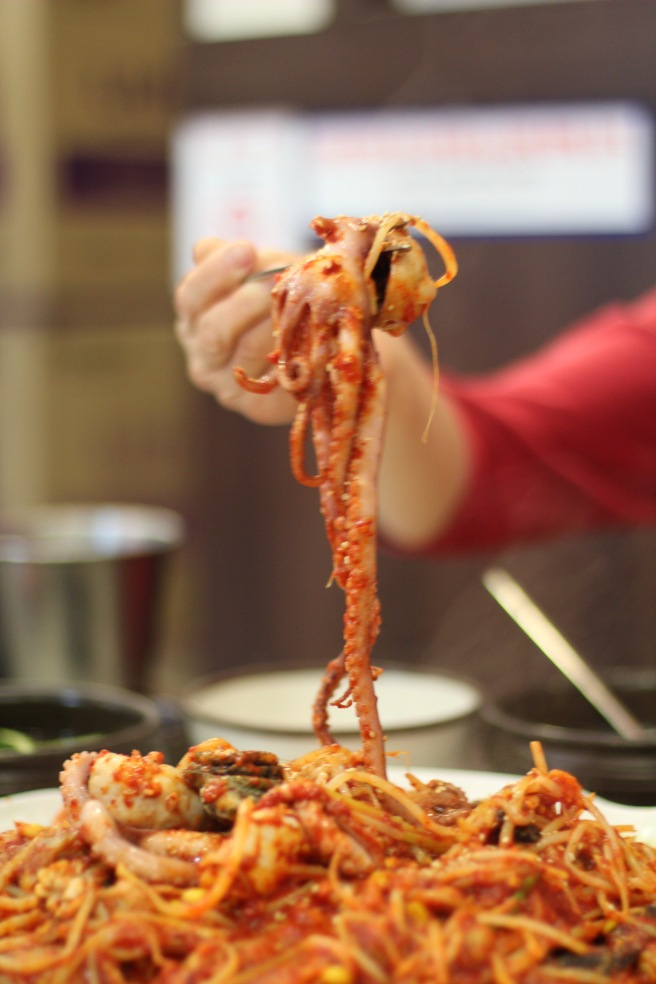 We’re rolling with it.

One thought on “Visiting the Gravesite”