The next day we walked around downtown Pittsburgh. We saw University of Pittsburgh’s Cathedral of Learning, begun in 1926 and built over a decade. The building houses departments, classrooms, labs, a theater, food court, and lounge areas. The “Nationality Rooms” are classrooms sponsored and designed by different ethnic communities to represent their heritage. At 535 feet, the Cathedral of Learning is the tallest and perhaps the most distinctive educational building in the Western hemisphere. 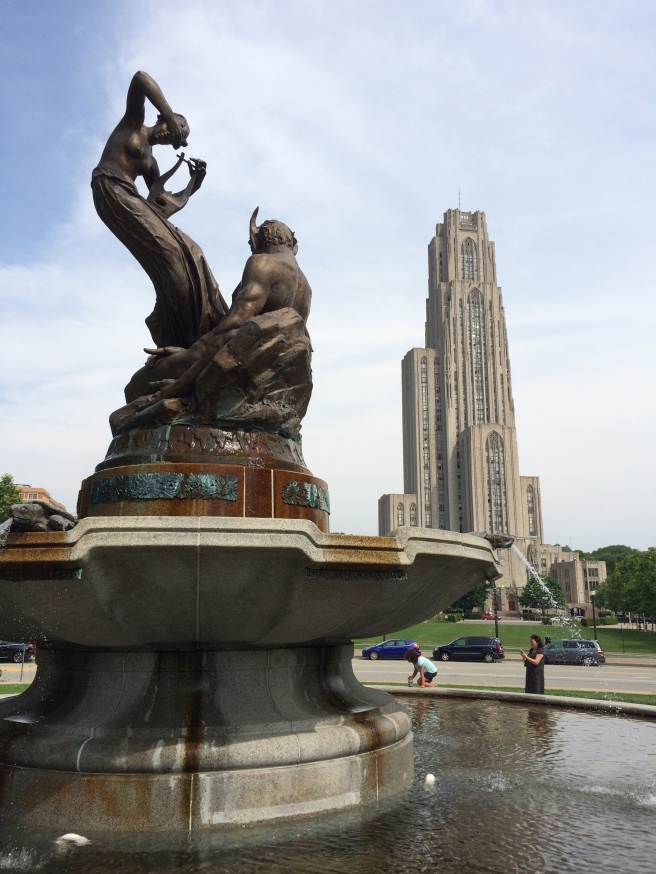 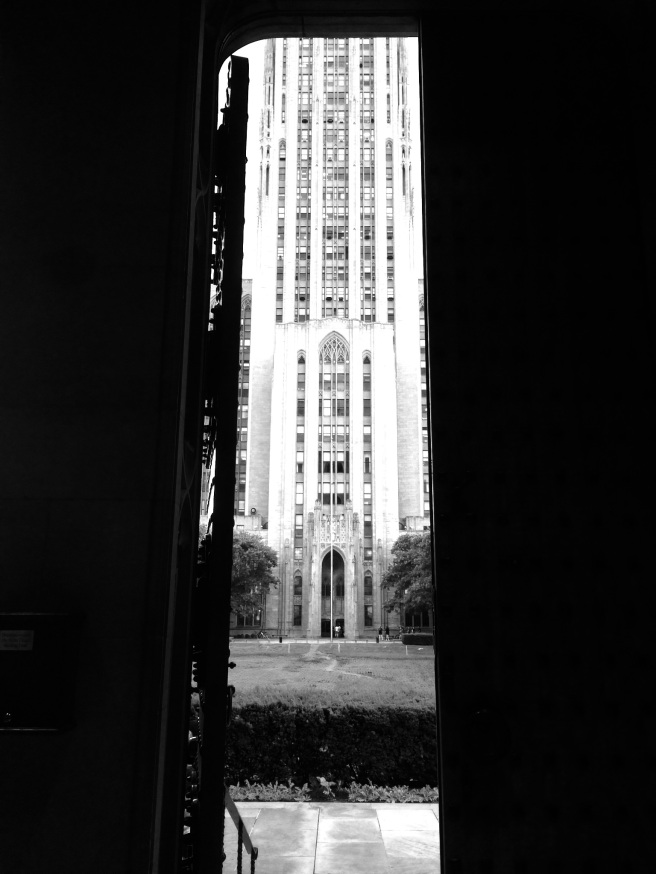 Directly facing the Cathedral of Learning is the Heinz Memorial Chapel: 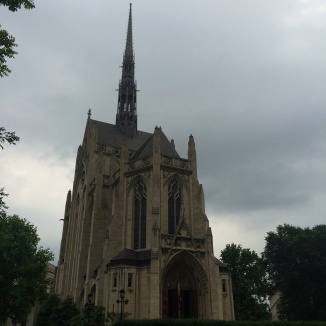 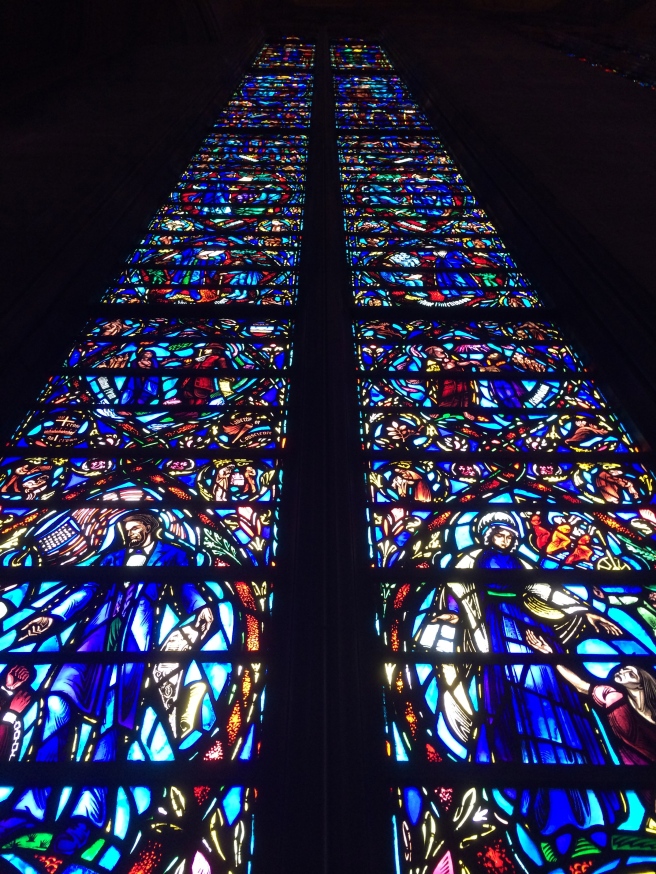 Just down the street is the Phipps Conservatory and Botanical Gardens: 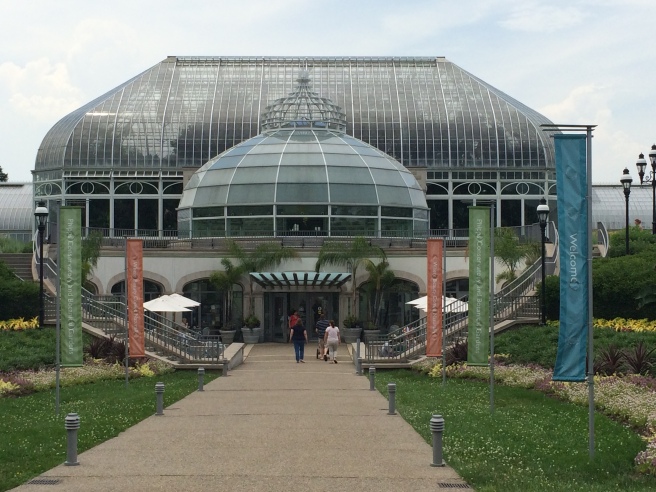 We had lunch in the café:

and then walked through the many different rooms.

There are Chihuly pieces artfully tucked around the conservatory: 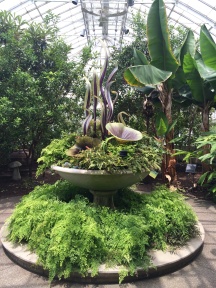 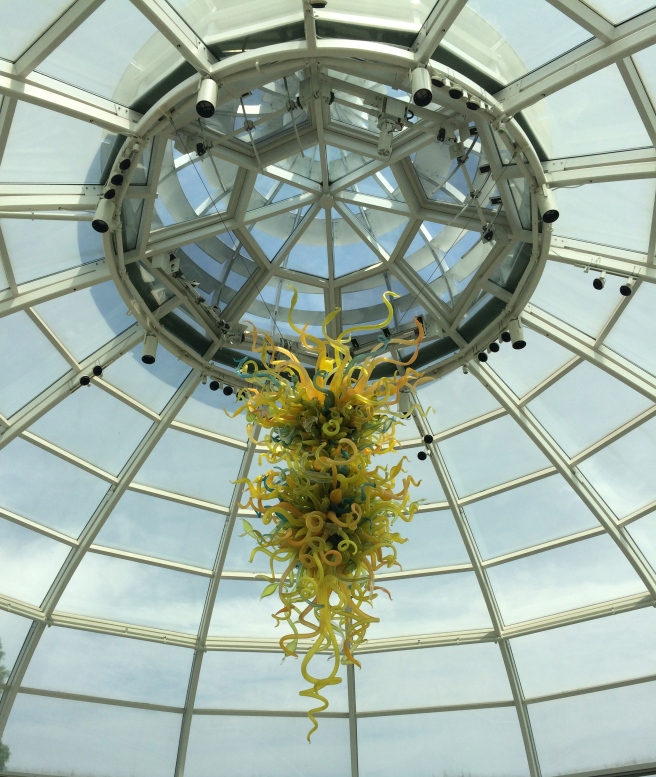 …and model trains, which run throughout the exhibits:

My favorite room was the Butterfly Forest in the Stove Room:

Someone’s not too thrilled…

It was quite amazing to see the chrysalises. Some of them hatched as we watched: 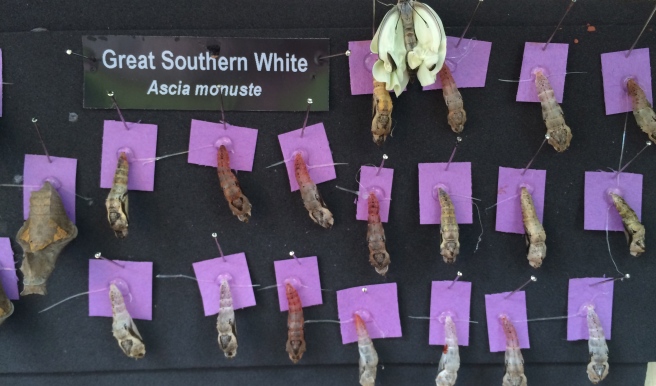 The last place we visited was the Bayernhof Museum, open by appointment only. This 19,000 square foot museum is located in the middle of a residential neighborhood and was the house of Charles Brown, the founder and CEO of Gas-Lite Manufacturing: 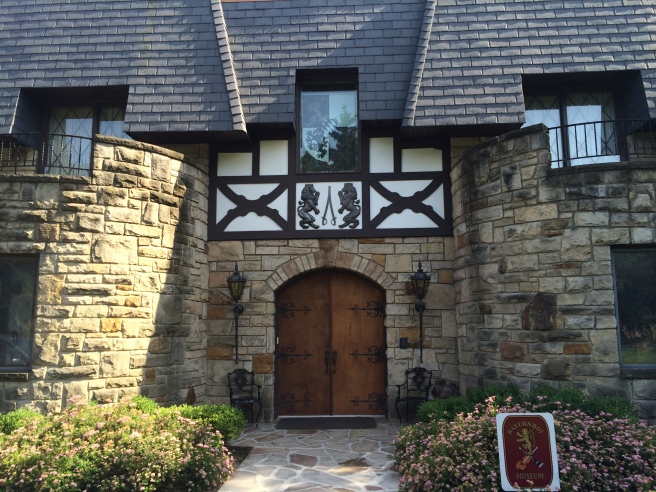 Brown was a prankster and an eccentric who collected music boxes and other automatic musical instruments. The tour guide gave us many examples of the practical jokes Brown played during his lifetime, including introducing his longtime girlfriend to everyone as Adolf Hitler’s illegitimate daughter. Ostensibly, his house is a music museum. Throughout the tour, the guide plays select instruments, some of which are remarkable. In fact, the Bayernhof  is really a personal museum that enshrines one very wealthy man’s oddball taste. The house itself is full of jokes, including fake bats in an artificial cave, complete with stalactites and stalagmites. The tour takes you through hidden passageways, a cheesy indoor pool room decorated with a Sound of Music mural,

a game room with the dogs playing poker picture made even more tacky by the fact that it’s rendered as a tapestry, and room after room stuffed with icky collections ranging from Hummel figurines to beer steins.

A room with a lamp/victrola.

I think Brown’s greatest and final practical joke was specifying in his will that his house should be turned into a museum. A foundation now ensures that this monument to poor taste, which has frozen into perpetuity bad 70s interior design, is being run as a music museum. The trustees spend hundreds of thousands of dollars building up Brown’s collection of automatic musical instruments and in repairing problems that have arisen over the years due to slapdash building. It’s an odd place, but worth a visit if you happen to be in Pittsburgh.