My husband has been trying get his British passport renewed since August. It turns out that it’s a beastly process that can take donkeys’ years. First, he had to obtain an affidavit from a fellow British citizen who had known him for at least two years, and who was “an acceptable..professional person, such as a policeman, religious minister, doctor, teacher or engineer.” Said person would have to attest both to his good character and to his likeness on the back of two photos, which had to be “professionally printed and 45 millimetres high by 35 millimetres wide.” Here’s a chart giving further guidance as to how the photo should look: 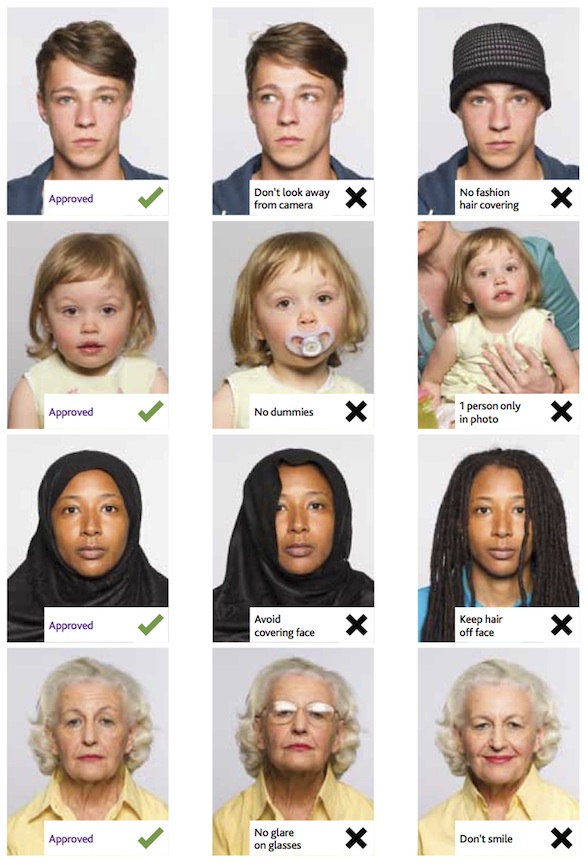 Let’s set aside the needlessly snarky reference to the young man’s knit cap as a “fashion hair covering,” the fact that sweet little toddlers are being referred to as “dummies,” and that elderly women are being asked to wipe the grins off their faces. It was the application form’s general tone of condescension that really rankled my husband: 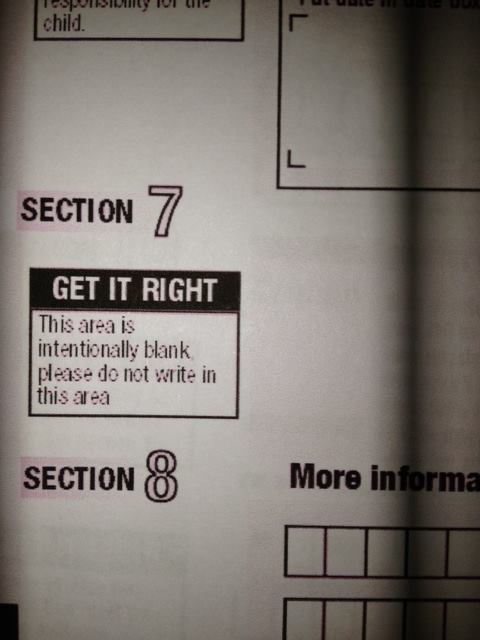 During his long and protracted struggle this photo appeared in his facebook feed with the comment, “A contender for the 2013 Max Weber Award for MOST CONDESCENDING BUREAUCRATIC FORM. Just in case you were tempted to submit a doodle in the entirely BLANK Section 7 of your UK Passport application…”

His uncharacteristic use of CAPS told me that things were quickly going pear-shaped.

He began to question whether or not he was even filling out the correct application form. He rang me up to vent.

Uhhh, the one that says “Application for a U.K. passport for overseas customers? I ventured timidly.

WRONG! he bellowed in my ear. What a total load of bollocks! he muttered angrily before ringing off.

That night he tried to ring up the customer service help line for further clarification. He had to press 1 for domestic customers or 2 for overseas customers. Three times in a row, he was connected to the domestic help desk, even though he pressed 2. They kept suggesting that he was punching the wrong number and declined to help.

What happened next made my blood run cold. I knew his knickers were well and truly in a twist when I heard him end the call by snarling in a cheesed off, het up, stroppy, and downright shirty voice that was absolutely dripping with bile and venom: “Have a splendid day!”

2 thoughts on “Married to a Brit”