When I was my daughter’s age, I was woefully uncoordinated. Not only was I devoid of any shred of athletic ability, I grew up in a family that didn’t play or watch sports. P.E. class felt like torture. It was just assumed that kids had a baseline knowledge of sports such as baseball or basketball. But I didn’t even know that you aren’t supposed to run with the ball in basketball. In the highly unlikely event that a baseball bat I was wielding would ever make contact with the ball, I wouldn’t have had any idea in which direction I should run. I was clearly such a hopeless case that eventually my P.E. teacher would let me go to the playground, rather than participate in his class.

For some reason, one day I got it into my head that I might try soccer. When I asked my mom and dad if I could join the kid soccer league, they told me, “Girls don’t play soccer.” Remember: this was decades ago, and my parents are from Korea, where girls, in fact, still don’t play soccer. I let it drop without a fuss.

Fast forward to today…My 7 year old daughter is well into her fifth season of soccer. In her very first season, we realized she was pretty good. Here she is celebrating her 7th out of 10 goals with her best buddy. (I think the score was something like 12 to 2). 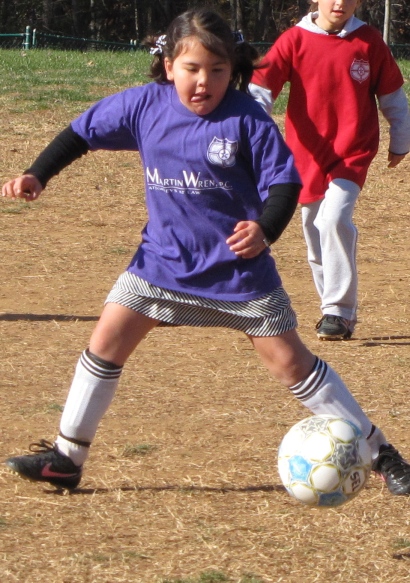 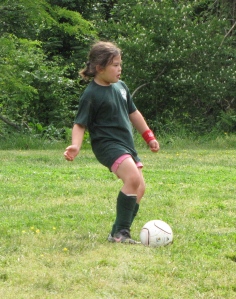 Recently, we were discussing what she wanted to be for Halloween. “I’m going to be Abby Wambach!” she said in a sudden burst of inspiration.

“Abby Wombat?” I asked. I thought this must be some animated  t.v. character I wasn’t up on. She looked at me in disbelief. There was an unmistakable note of pity and maybe even a little bit of disgust in her voice, “Abby Wambach?! U.S. Women’s soccer team?!”

Yesterday evening I went to pick her and her brother up at the soccer field, where her 10 year old brother was having his practice. Her brother plays for a boys’ U-12 (under 12 years old) “challenge” team that you have to try out for. Usually I find her off to the side kicking around a soccer ball or watching the action on the field.

This is what I saw yesterday. The light was dim, and I only had my camera phone, but I snapped away…See the little blur in the black and white soccer shirt and turquoise skirt? Yep, that’s my girl, holding her own with the big boys:

And here’s the funniest part. I still don’t really know how to play soccer, but look:

Oh, and my mom and dad are very proud of their soccer-playing granddaughter!