On our last day in Seoul, my sister and I took a walk to Gwanghwamun Square. It was overcast and smoggy, but there was plenty to see on our walk toward Gyeongbokgung Palace. The palace and monuments leading up to it are impressively situated with the majestic Bugaksan Mountain as a backdrop.

We walked past the 40th Anniversary Monument of Gojong’s Enthronement. Gojong (1852-1919) was the 26th king of the Joseon Dynasty, and the first emperor of Korea. 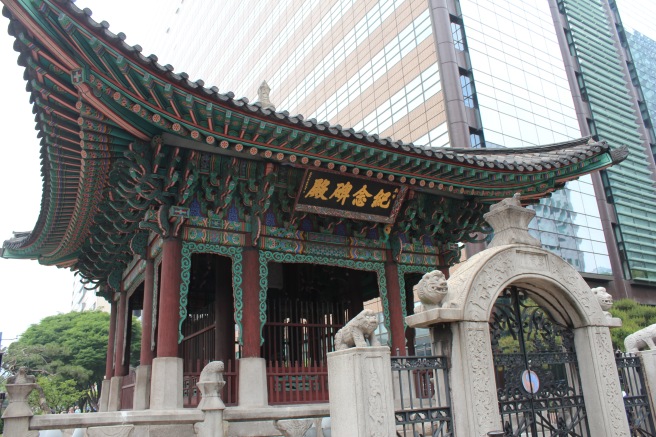 They reminded me of something I couldn’t quite put my finger on…and then I remembered:

“When elves go bad…” (This is my daughter as an infant, expressing her displeasure over her outlandish getup).

Admiral Yi (1545-1598) is one of Korea’s greatest heroes, a naval commander who never lost a single battle. He is famous for his victories over the Japanese navy and for improving upon a warship called the turtle ship or geobukseon:

My dad once told me long ago that we were related to Admiral Yi. Genealogy is a big deal in Korea. Many people have books listing all of their ancestors for generations among their most prized possessions. I know my family has one somewhere. Sure, there are a gazillion Kims, but are you the right kind of Kim? Certain Kim bloodlines have more cachet than others. This information is important when marriages are being considered. You wouldn’t want to marry a Kim from the same ancestral clan, for example. When I was in high school I had to do an oral presentation on our family history. When I asked my dad for some details, he casually told me that we were directly descended not only from the great Admiral Yi, but also from kings and queens of the Silla Dynasty. I was puffed with pride and my classmates were suitably impressed when I wove that fact into my presentation. It was only years later that I realized that EVERY Korean person is somehow related to some king, queen, (or illustrious admiral).

Still, I couldn’t help thinking about the fact that we were related to Admiral Yi as I walked past the exhibits on his life and accomplishments in the museum below street level, underneath his and King Sejong the Great’s statues.

The Admiral was as bad-ass as they come: 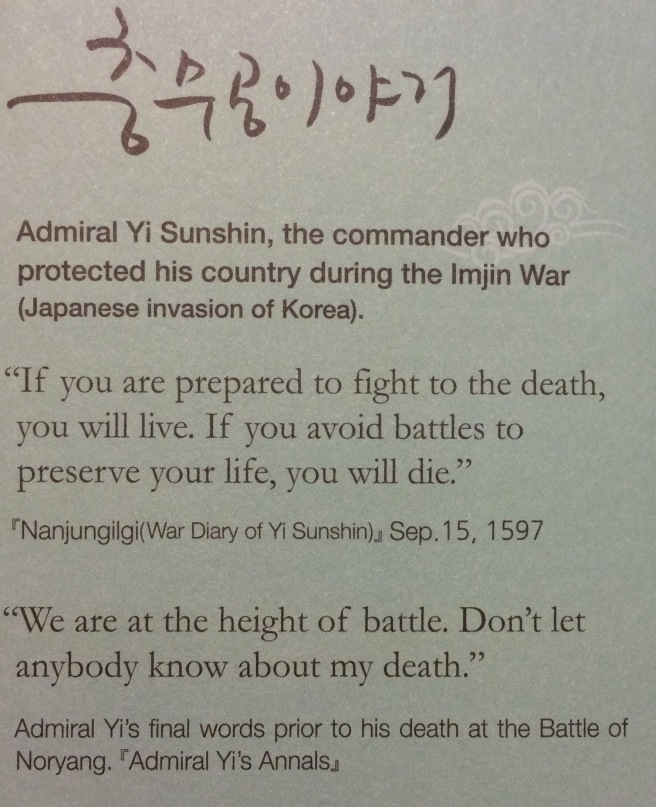 He was inventive, resourceful, and creative:

He was a poet…

And look! Great Grandpa Sun-sin loved keeping a diary – it was his most prized possession: 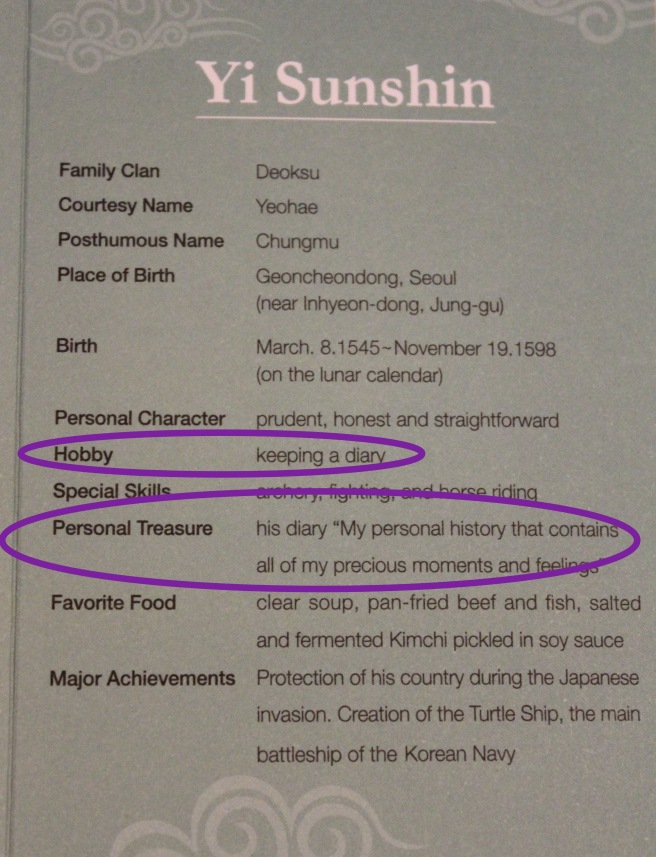 Later that day, with my head full of all the amazing things I had learned about my forebear, I asked my dad to remind me how exactly we were related to Admiral Yi. He told me he was his mother’s great x 17 grandfather. I waited for him to point out all of our ancestor’s excellent traits and qualities and to confirm all the connections I had made myself. Instead he said this would explain why my grandmother was “unusually large and husky” for a Korean woman. 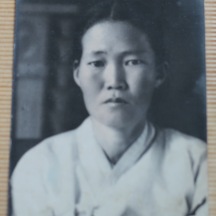 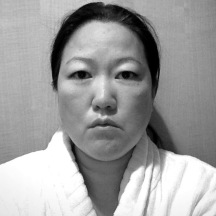 This explains so much!

You can just start calling me The Admiral from now on.

Just past the statue of Admiral Yi is the statue of King Sejong the Great (1397-1450), which was erected in 2009. King Sejong was an enlightened ruler, who is most famous for creating the simple, phonetic 28 letter Korean alphabet so that everyone could be literate. One of the most interesting features of this alphabet is that the shapes of the letters are meant to depict the shape of the mouth and tongue when making the sounds. Before the creation of Hangul, only the upper classes could read and write, because Korean at the time relied so heavily on the use of Chinese characters. Scholars and noblemen opposed the creation of the alphabet, fearing that it would sour relations with China and go against Confucian principles, but King Sejong persisted in working toward his vision of universal literacy:

“The language of our people is different from that of Chinese and hence cannot be expressed properly in Chinese characters. That is why there are many simple-minded people who can not express themselves even if they have things to say. Taking pity on them, I have made twenty eight letters, only hoping that all our people learn them easily and use them comfortably every day.”

I can attest to the ease of learning how to read and write Korean – my mother once taught this simple-minded person how to do it in an hour. Now if only I knew what I was reading and writing! 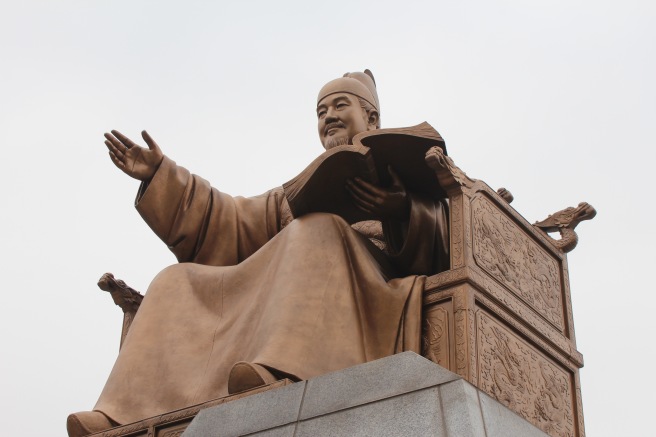 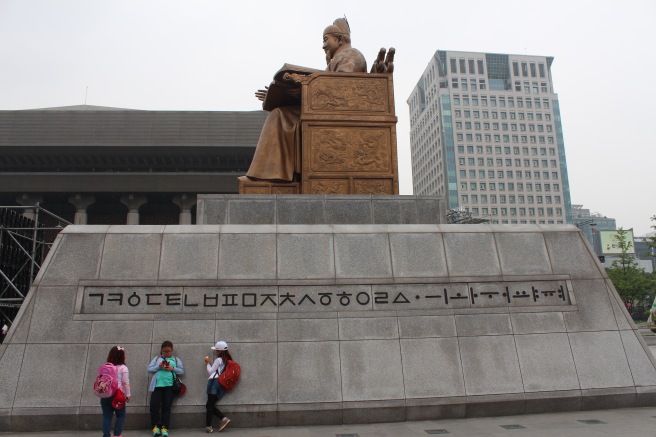 On the extensive grounds of the palace are several museums, including the National Folk Museum.

Korean jangseung, or totems like these were often placed at village entrances, often in male and female pairs, to ward off evil spirits, protect against disease, and to ensure a good harvest. The inscriptions are identifiers. The male figure is “Great General Under Heaven” and the female figure is “Great General of the Underworld.” Now that has a certain ring to it, don’t you think?

There was an impressive collection of stone statues of civil servants. Statues such as these are often placed to stand guard at the graves of important people. 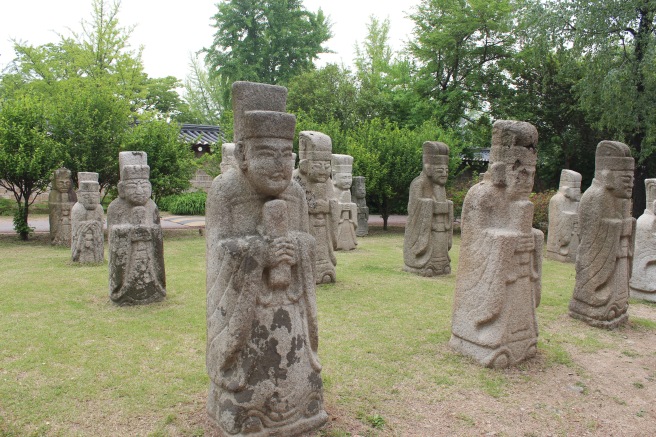 One area of the grounds has been designed to recreate a street in the 70s. My family moved to Korea for a couple years when I was a baby in the early 70s. I was too young to remember anything about it, but I thought it might bring back memories for my sister. 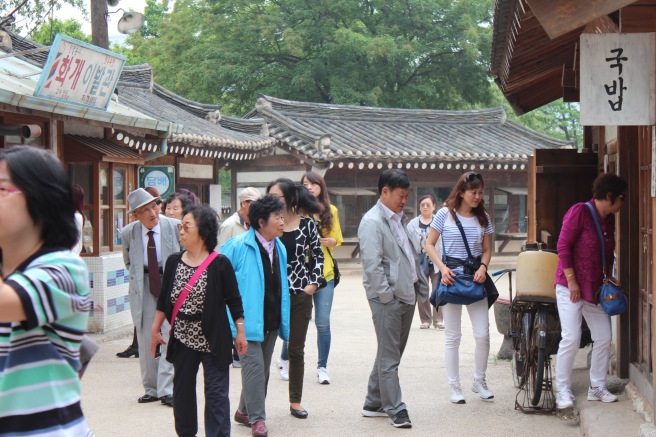 She once told me that all the kids had to bring candles to school. They would wax the floors with them on their hands and knees…

The 70s recreation did spark one memory for me…I was very excited to see this poster hanging on a wall. First, check out the Korean version of Audrey Hepburn: 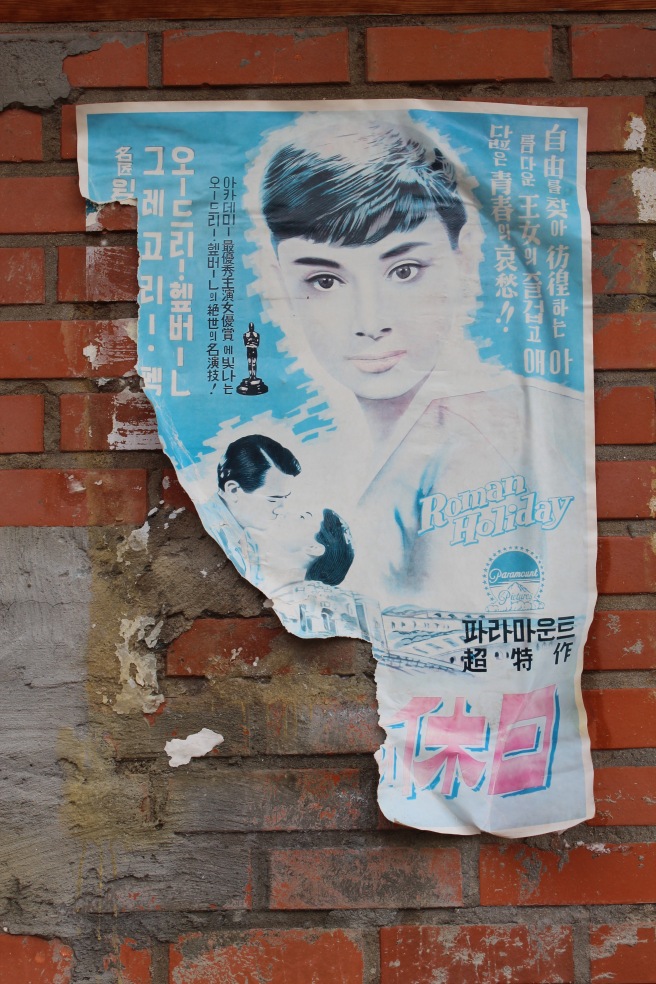 For as long as I can remember, my dad’s been trying to convince me to cut my hair short. He always begins his pitch by talking about how when the movie Roman Holiday came out in Korea, all the women ran out to get their hair cut like Audrey Hepburn’s!

The next morning we headed to the airport…My mom especially wanted to make sure I got a picture of her with her brother and his hat! I love the fact that even in his seventies, he calls my mom noona, (big sister). He very solicitously made sure she didn’t have to wait in long lines like the rest of us schlubs!

I was touched to see that a whole party of people made the hour and a half drive to the airport to see my parents off:

One of the men told me that he had named his son after my grandfather and that his daughter has my mom’s name. He earned his doctorate in Systematic Theology, because my father first taught it to him. There was a lot of love for my parents in that airport. They may have never won any naval battles or sat on any thrones:

…(well, maybe just once), but they’ve lived their lives with integrity, and they’ve earned the respect and love of people on both sides of the globe. I’m proud to be their daughter.

This trip to Korea was an experience I will treasure for a lifetime, and I’m so grateful to have been able to share it with my parents and my sister.

The Great Admiral of the Underworld is signing off for now…Until next time!