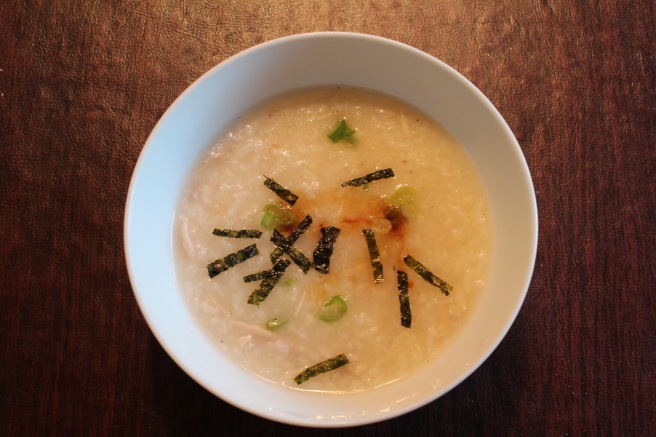 This is what we’ve been eating almost every day for breakfast (and sometimes lunch and dinner too!) since Thanksgiving.

I tried jook aka congee aka rice porridge for the first time sixteen years ago in a hotel in Jeju Island. I had never tasted it as a child. My mother never cooked it, because my father wouldn’t touch the stuff. He’s probably the unfussiest eater I know, but jook reminds him too much of the thin gruel he had to eat as a malnourished child growing up in war-ravaged Korea.

As for me, the taste of jook was a revelation – a mellow, homey, cozy dish that tastes like a warm hug from someone you love. I have dreamt about it all these many years. I don’t know why it took me so long to finally try to make it, because it’s dead simple, really. It’s the perfect winter comfort food. It would make a great baby food, because it’s so easily digested. In fact, it’s sometimes fed to convalescents, because it’s so mild. Finally, it’s an easy way to use up the remains of a Thanksgiving turkey or a rotisserie chicken, bones and all. Have I convinced you? I’ll share the recipe with you at the end of this post, but first – Jeju Island.

I lived in Korea from the age of 8 months to about 3 years. About 16 years ago, my parents took me back to Korea for the first time since we moved back to the U.S.  We visited Jeju Island, a tropical island off the southern coast of Korea with dramatic lava formations, gardenia bushes taller than humans, and citrus and palm trees. It’s the traditional honeymoon destination for Koreans and a favorite vacation spot. Dutch sailors are known to have shipwrecked on the island in the 17th century. This perhaps explains why there is a distinctive, more Caucasian look to people from Jeju Island. My mother’s family has roots here. Her maternal grandfather owned a factory there that capitalized on its natural resources; it produced buttons made out of shells and canned sea food for export to China. 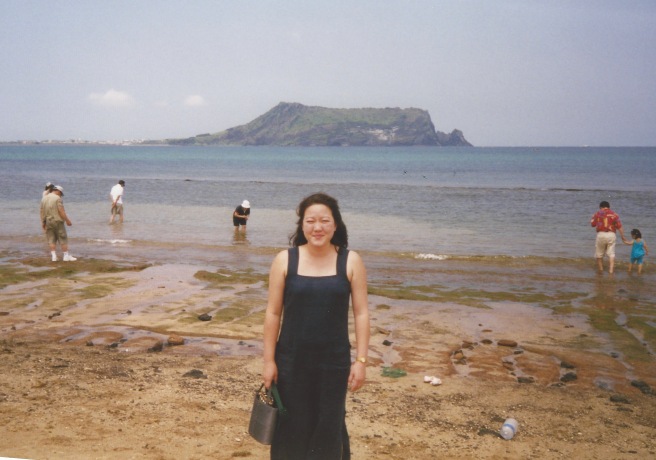 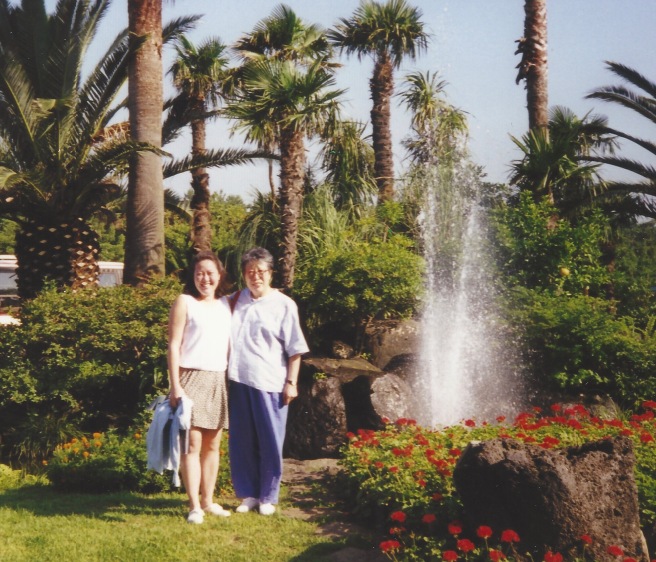 We traveled all over the island in a rickety old tour bus hung with ratty floral curtains of indeterminate vintage. Our tour guide told us that Jeju Island is famous for three abundances – wind, rocks, and women.

At a Stone Sculpture Garden, we saw plenty of rocks: 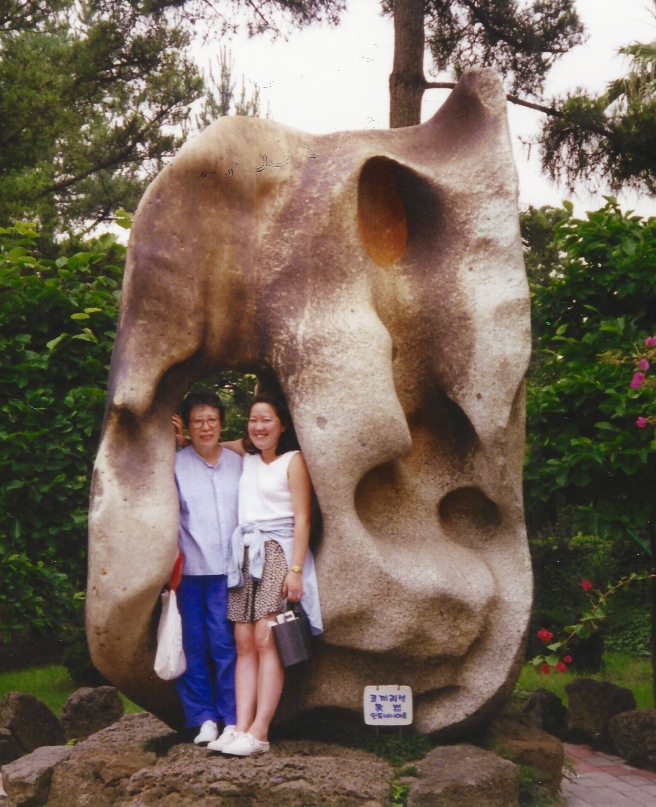 and creative depictions of the culture of the Jeju of old…

A depiction of parenthood!

The Dol Harubang is the symbol of Jeju Island. They were carved out of the plentiful black volcanic rock and strategically placed around the island to scare off demons or invaders.

With their suggestive shape, they are also considered a symbol of fertility. Rub the nose for a boy, or an ear for a girl.

During the Joseon Dynasty, Jeju was used as a penal colony for political exiles and as a place for horse-breeding. One of the stops on our tour took us to a horse ranch. While all the other chump tourists donned doofy looking hats and red vests to ride, I settled myself on a comfy bench next to my mother, and prepared to watch.

My mother nudged me and said, “I think you should ride.” (N.B. – She did not suggest that we should ride).

“When else will you have a chance to ride a horse?”

I’ve never been a horse person. In fact, horses scare me. I had had opportunities to ride before, but had always declined them. My mother’s suggestion that I ride, delivered so earnestly and with a slight undercurrent of urgency, was so surprising to me that I, as if under a spell, got up off the bench and suited up. No matter that I was wearing a long sundress and had never been on a horse in my life, my mother’s wish was my command.

Look at that poor dupe, smiling so innocently…

The horses lined up for what I thought would be an easy amble around the track.

Suddenly, a scrawny man in a wife beater rode up on a moped, and started blowing a whistle. The horses took off running: 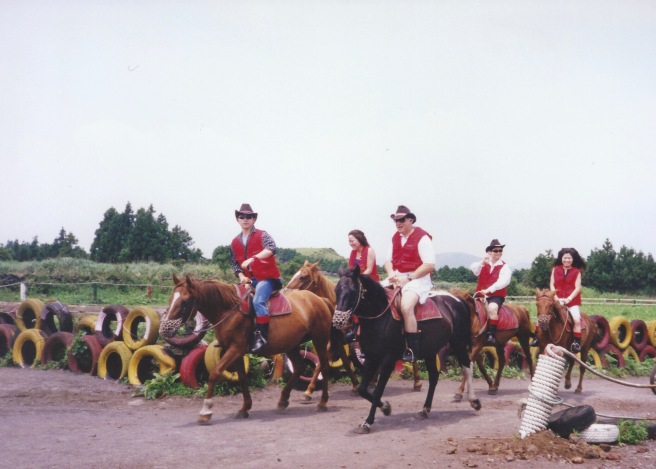 I clung to the horse’s back as we whipped around the track. I miraculously managed to stay on my horse, but the next day I felt like I had been hurled down ten flights of stairs and had then been trampled by an angry mob all wearing soccer cleats.

“Moooom! I’m like a sack of broken bones. I can barely walk!”

My mother complacently listened to me complain about the pain for days.

The most illuminating discovery for me was that Jeju Island is known for its strongly matriarchal social structure, which is unusual for Korea. The women of Jeju Island are famous for their strength, indomitable spirit, and iron wills. Another revelation which explained so much!

Our tour guide explained to us how this social structure came to be. Men who fell out of favor with the king were banished to this tropical island paradise. And then – oh, the cruelty! – they were forbidden to work. Instead, they were forced to sit back and watch their spouses work. The women became “pearl divers” or haenyeo. These women were mythologized as mermaids: 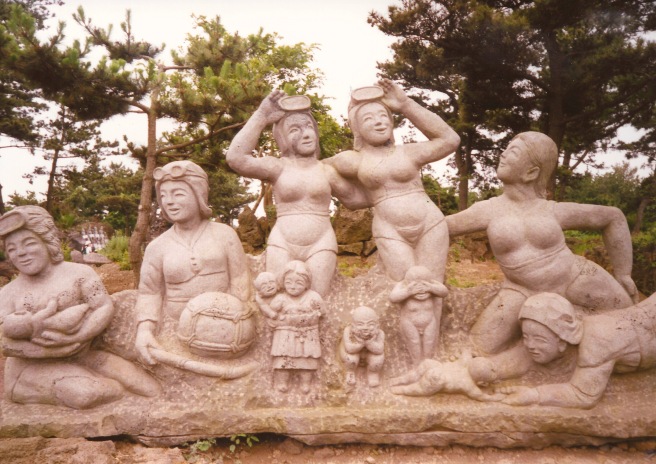 …but in fact, diving is a hard and dangerous job. You can still see haenyeo bobbing around in the ocean these days, but the profession is dying out with the last of the elderly women who practice it. For centuries, the women have dived underwater for minutes at a time with no breathing apparatus.

Haenyeo sorting through their catch.

We probably ate some of their catch at one of the restaurants we went to: 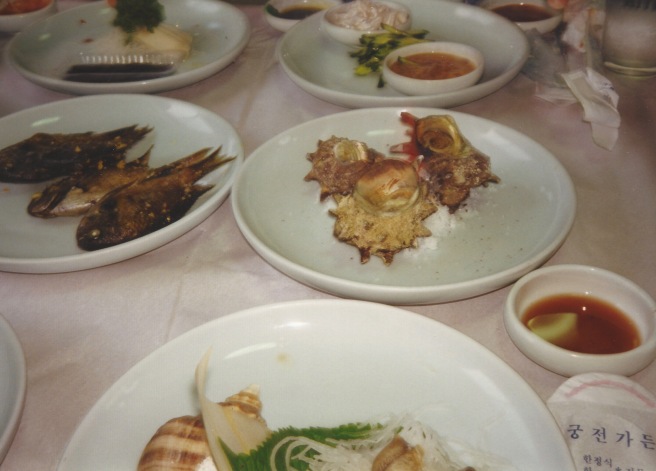 Waitresses kept bringing plate after plate until the long low table we were seated at was covered with seafood. Some of the seafood arrived at the table ablaze; many of the dishes were so fresh, that the creatures were still wriggling. As uncultured as it may seem, I couldn’t eat a thing and had to avert my gaze for the entire meal.

Luckily for me, I was filling up every morning with jook, a daily staple of the breakfast buffet at the Hyatt Regency:

1 turkey or chicken carcass, bones and any leftover meat

Bring to a boil the rice, water/broth, and the turkey or chicken carcass. Lower heat and simmer for about an hour. Remove as many bones as possible. (I can never manage to get them all out, but the kids have become adept at discreetly fishing them out while eating). Put in a dash of sesame oil and a dash of soy sauce. Sprinkle a little seaweed and scallions on top. That’s my bare bones version, but the possibilities are endless. The hotel restaurant had lots of other things you could sprinkle on top such as shredded marinated beef and abalone.