My dad has been losing his vision to diabetic retinopathy. He can no longer drive. He misjudges distances and he sometimes stumbles. Worst of all: his ability to read has been seriously compromised. He has consulted with specialists on two different continents. He’s had laser treatments and injections. He has bought pair after pair of new glasses in the hopes of improving his vision enough to be able to read again with ease. He has tried reading on the Kindle and the iPad without success. Lately, he has decided he will no longer seek available treatments.* Still, every morning he spends a couple hours hunched over his beloved books with a powerful magnifying glass, laboriously trying to make out the letters, which stubbornly, traitorously remain blurry.

My dad has suffered terrible losses in his life. His father died when he was just a child. He lost siblings to the privations imposed by war and invasions. He has always lived modestly, never indulging himself in anything other than the books that are his treasure. He would think nothing of giving away cars, furniture, clothing, before each of our many moves, but his ever growing collection of books always went with us across continents and oceans. Despite my mother’s vociferous objections, he would not be parted with these. When we finally settled down in Virginia, he built his own bookshelves and filled them with his cherished volumes of Heidegger, Machiavelli, and Kant. He lovingly fashioned suede covers to rebind his most cherished books that were literally read to pieces.

When my parents moved back to Virginia after many years of living in Korea, they took stock of their belongings. Before they had left for Korea, they had a shed built in their backyard just to house my dad’s books. They never expected to be away for as long as they were. By the time they returned, the books had been languishing in the shed for over a dozen years. Some did not fare well. Mice had nibbled the pages of some. Others had suffered from water damage. I’m sure it broke my dad’s heart to discard these books. What he did with the ones that survived broke our hearts. To our shock and horror, he boxed up the vast majority of the books that he had collected over a lifetime and shipped them to the university in Korea where he had been working all those years, as a donation to the library.

My siblings and I had grown up with these books as the only constant part of our landscape. Many of them predated our own existence. To us, it was as if my dad was sending bits of himself away. It seemed like a surrender to old age and to his loss of vision, it seemed like a farewell to his life of scholarship. We said nothing to my father, but amongst ourselves, we mourned for all of these losses.

Now I realize that we needn’t have worried. Lately, every time I go to Arlington to visit my parents, my dad presses a piece of paper into my hands upon which he has scrawled in his illegible handwriting a list of the books he wants me to hunt down for him. Little by little he is replacing the books he regrets having shipped to Korea, the books that had to be discarded, and the books that are falling apart from overuse.

“And please try to find them in hardback so they’ll last longer,” my 78 year old father says in his quiet, gentle voice.

“Sure, Dad,” I say. As I hunt online for Summa Contra Gentiles by Saint Thomas Aquinas or Will Durant’s The Story of Philosophy, I am filled with peace and joy.

*Just this month I was excited to read about a study that’s been going on at the University of Virginia. Researchers are investigating the promising use of stem cells to treat and perhaps even reverse the effects of diabetic retinopathy and are getting close to the clinical trial phase of their study. 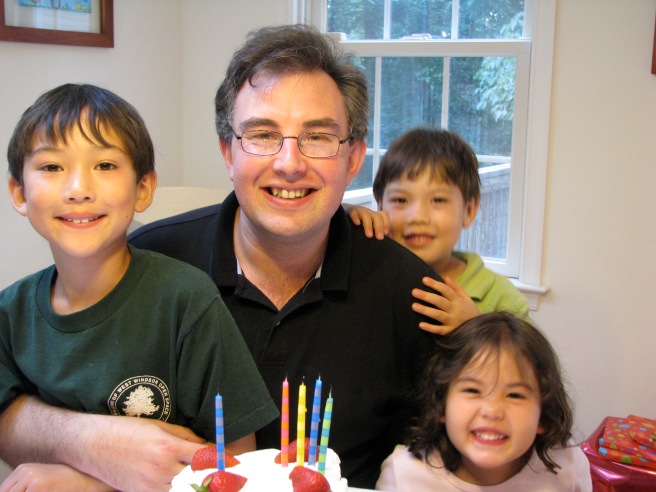