For whatsoever a man soweth, that shall he also reap. Galatians 6:7

My children are descended from a long line of liars on both sides of their family tree. From the moment they entered the world, they’ve been raised in an intricate and treacherous web of secrets and lies. It’s exhausting to live like this, but we know no other way. It’s programmed deep in our DNA.

Mostly we lie for benign reasons. Like many parents, we’ve spun tales of Santa and the tooth fairy. 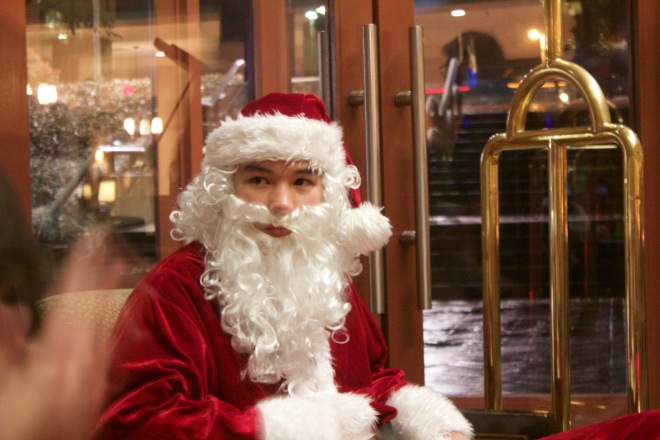 But we’ve also dipped our toes into more questionable acts of deception. For instance, when my oldest son was a toddler he once asked me why a squashed squirrel in the middle of the road wasn’t moving. 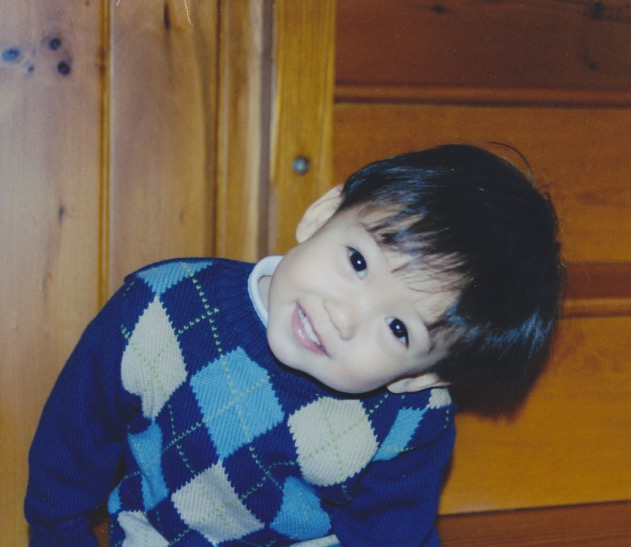 How could I break this kid’s heart?

“Oh, him?” I replied, “He’s just taking a little nap. They do that sometimes.”

Another time I wandered down the feminine product aisle in the grocery store with my second son.

With his blankie clutched in one chubby fist, he trailed the pointer finger of his other hand along the packages of maxi pads and tampons as we walked down the aisle.

“What are these?” he asked.

“But, what are they?…Cheese sticks?”

I will admit that there have been more egregious examples of deceit. It’s possible that on an occasion or two, I may have asked my kids not to mention something to their grandparents, “because they’re from another generation and another culture and they wouldn’t understand and we wouldn’t want them to worry or make them sad.”

It was only last week that I realized all these years the little punks have been storing up every single lie ever told in their steel trap brains.

I was driving my 15-year old home from his afterschool activity. As we pulled into our driveway, his older brother happened to pull in right behind us. He emerged from his car, dripping with sweat and lugging the enormous gym bag he insists on carrying everywhere. (It’s actually the large duffle bag I used myself when I was a college student to carry an entire semester’s worth of clothes and books back and forth between my house and campus. I’ve offered more than once to buy him a smaller gym bag, but he’s always demurred, because “it holds all my stuff.”)

But I digress…He had told me that morning he would drive straight from school to the open mat session they were having at his Brazilian Jiu Jitsu gym, just as he had done the week before.

So sweet. So innocent. Such liars.

“Oh, hey!” the 15-year-old addressed his older brother as he got out of the car, “So you went boxing again?”

Through the car window, I could see my son shoot daggers at his younger brother with his eyes. He put his fingers up to his lips and curled his lips into a silent, but unmistakable “SHHHHH.”

It’s difficult for me to understand the appeal of grappling with a sweaty stranger, yet I’ve let my son do Brazilian Jiu Jitsu. When he started talking about doing boxing, however, I put my foot down and told him in no uncertain terms that he would not be allowed to do this. The boy is about to apply to college. Does he really need to get his head bashed in for sport?

I suspended his driving privileges for a couple days and read him the riot act for lying to me about the boxing. When his dad came home and was apprised of the situation, he launched into a lengthy disquisition of his own.

My son could bear the hypocrisy no longer. He yelped in fury and began to enumerate the many times we had lied to him and to others.

We all went to bed that night feeling bruised and battered and not unlike that squashed squirrel in the road.

At 1:30 am I awoke from deep slumber to the strong smell of fish frying. Surely this was just one of those nonsensical, yet hyper-realistic dreams?

I stumbled down the stairs to investigate and found my thwarted pugilist standing over a frying pan.

“What the hell are you doing?!” I asked, my eyes squinting in the bright light of the kitchen.

“Frying fish,” my son replied as if it were the most obvious thing in the world.

“Where did you even get the fish?”

“I caught it a couple weeks ago.”

“Well, where has it been all this time?”

“In the chest freezer.”

The exchange was so surreal and yet so banal. I was at a loss.

“The whole house reeks now. Next time you’re hungry, could you please just have a bowl of cereal like a normal person?! And make sure you clean up after yourself when you’re done!” I said and lumbered off to bed.

When I went downstairs the next morning I saw that he had, for the most part, cleaned up his mess. I did find a carefully labelled Ziploc bag left on the counter top that had until very recently contained “two longnosed sunfish fillets.” As I looked around the kitchen I also discovered a gallon jug of canola oil. I stopped buying vegetable oil years ago when I read about its carcinogenic properties.

“Where did this come from?” I wondered out loud.

“Oh!” my daughter piped up, but then immediately stopped herself, “Well…actually I don’t think I’m supposed to tell you.”

She took one look at my face and began to sing like a bird.

“Last week when ‘N’ drove himself back from his piano lesson in Crozet, he stopped off at Great Valu and bought fish and frog legs and that’s when he got the oil too.”

That one in the middle? She’d sell her brothers down the river for a song.

Her response so perfectly reflected our bizarre and dizzying reality. It’s damn near impossible to keep track of what we are or are not supposed to tell each other or what we know or are not supposed to know. Though I hadn’t known about the vegetable oil, I had in fact known about the fish and frog legs. I had seen a small fillet in the fridge, but it disappeared soon after and I had forgotten all about it. As for the frog legs…my son fried them up and ate them the very same day. (And by the way, in case you, like my eccentric son, were wondering? “They taste like river chicken…kind of chickeny and fishy at the same time.”)

“But wait a minute…what about that other fish he bought? Did he already fry that?” I asked.

“No. He bought that fish to feed to his other fish. And he caught the sunfish at his friend’s house to eat himself,” my daughter patiently explained. 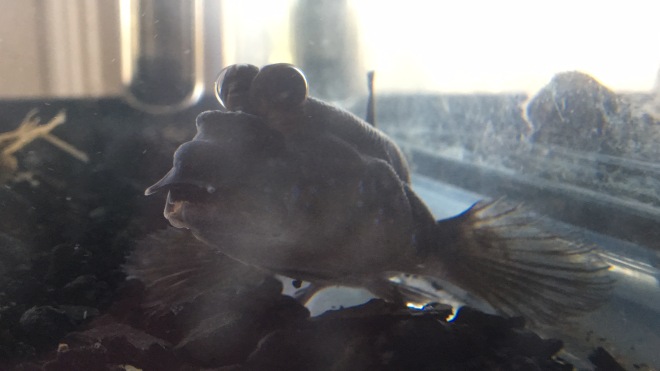 My kid buys groceries for this thing.

“So you knew about the sunfish?”

“Well…yeah,” she answered evasively, wondering if this admission would get her into trouble.

“No. He came home with the fillets. He must have cut it up at his friend’s house.”

“And you saw him stash the fish in the freezer?”

“And how come I never saw this ginormous bottle of canola oil until this morning?”

“Oh, that’s because he was hiding it in his gym bag.”