“I’ve known this car longer than I’ve known you,” I recently told my 11-year-old daughter.

“I don’t like it when you tell me that,” she replied.

I was surprised by her reaction on two fronts. First, it revealed her suspicion that in our 15-year-old workhorse minivan a.k.a. my Chariot of Fire, she might have a rival for my affection. Second, I hadn’t realized that I had ever told her that fact before.

When we first bought the minivan, my memory was a lot sharper and I wasn’t so prone to repeating old stories. When we went shopping for the car, I was shockingly great with child (with my second son). I caused unease wherever and whenever I lumbered into sight.

Two days before Baby #2 was born.

As I got behind the wheel of a spanking new car to give it a test drive, the young salesman slid into the passenger seat and looked over at me nervously.

“Aaaaaaaany minute now,” I said, “For all I know, it could happen right here, right now.”

Until this time we had driven hand-me-down cars. The purchase of a brand new car was made possible only by the generosity of my grandfather, who had died recently and left a sum of money for each of his nineteen grandchildren. My husband and I planned to use the money I received from his estate as a downpayment for the car.

The fact that the money came from my grandfather was problematic. He was the scion of a family of Catholic martyrs, three generations of whom were massacred by the Japanese in one day. During the occupation, he was a leader of an underground resistance movement, and as a result, was repeatedly arrested and tortured by the Japanese. 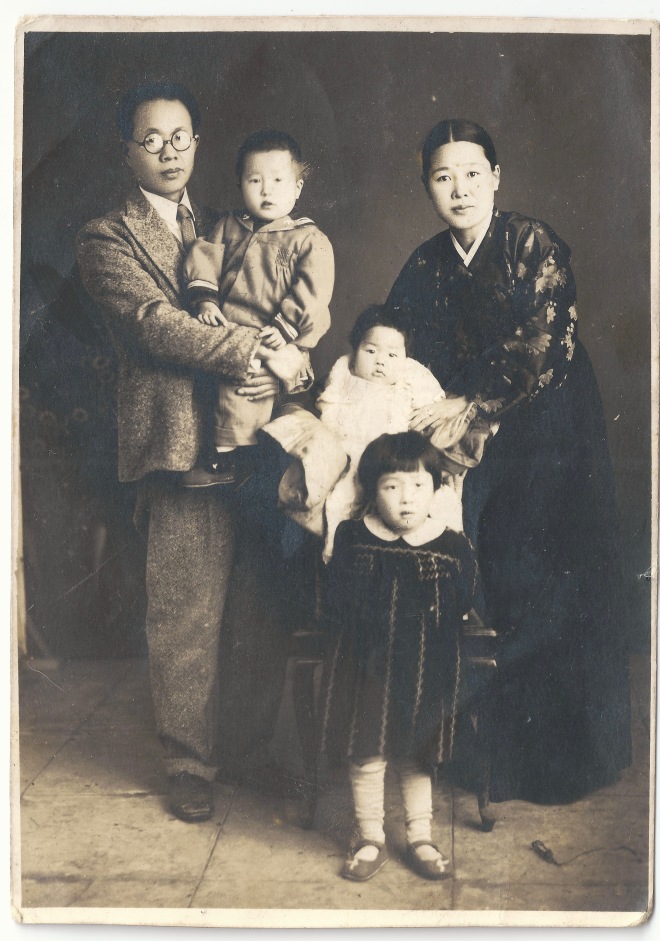 My grandfather is on the left. My mother is in front.

Three generations later, our lives still reflected that history. My father, whose family also suffered under the Japanese occupation, refused to ever buy Japanese products. Once when we were visiting my brother, who was in college at the time, he noticed a pair of flip-flops on his floor.

“Why are you wearing Japanese shoes?” he asked curtly.

When he saw the futon upon which my brother slept, he said: “That’s a Japanese bed.”

My husband and I had our hearts set on buying a Honda Odyssey, but given my family history, it wasn’t at all clear that this was going to be politic or even possible at all. I finally screwed up the courage to ask: “Uh, Mom? Do you think Grandpa would be really upset if he knew we used his money to buy a Japanese car?”

“Do what you want!” she replied waving off the question in her usual no-nonsense way.

When we drove in our new car together for the first time, my husband remarked: “Wow. You’re a much more confident driver now.”

It was a revelation for my vertically challenged self to have a commanding view of the road. I did feel confident, and I felt free. I learned to love driving in my minivan. 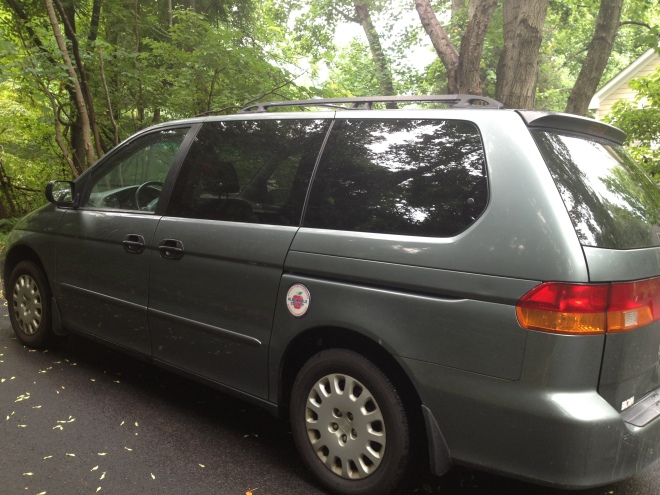 My sweet pimped out ride. See that Albemarle County Schools magnet on the gas cap? Custom, Baby. I’m thinking about having flames painted along the sides next…

It is not a fancy car. We bought the base model without any extra frills. When we transport other people’s children, they will often stand expectantly by the door, waiting for it to open automatically.

“Oh, sorry,” I have to explain, “You have to open it yourself.” Latterly, I’ve had to add: “You have to give it a really hard yank to get it open.”

My mother always shakes her head when she gets into her preferred second row seat on the right and silently surveys the detritus strewn about the cabin. But you know it’s bad when children make comments about the mess.

The exterior of the car is not pretty either. Within weeks of owning the car, my husband backed into a fire hydrant. 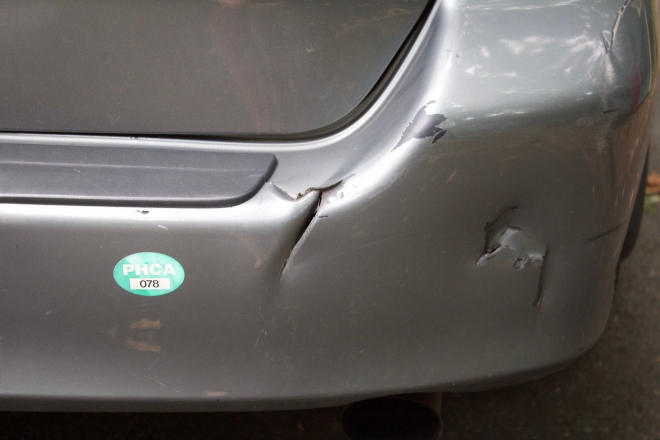 The fire hydrant dent and the sticker for my last neighborhood’s community association.

My initial reaction took me by surprise. I was elated: There! It’s done. And it wasn’t me! And now, I really could be free. There were many more dents and dings along the way…none of which were worse than that first one, and none of which we ever bothered to fix.

Each dent is a reminder of where we’ve been. The first one? That was in New Jersey, where we were visiting my sister and her family. The latest one? 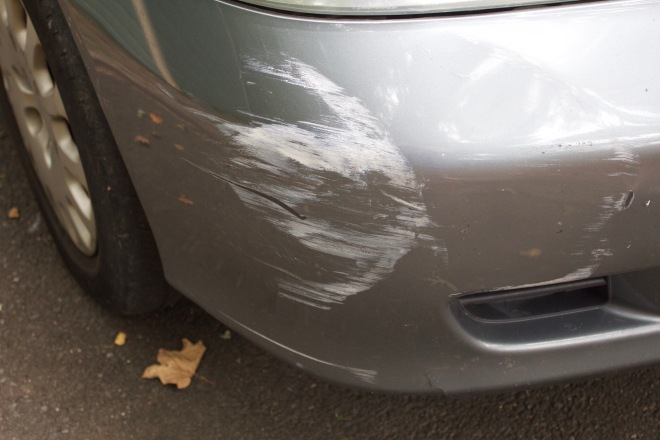 That’s paint from the entrance to the garage of our new house…the fourth one we’ve lived in since buying the car. The dent in the rear door came from a friend who offered to help me pack for a sabbatical year in North Carolina. As she was leaving, she lost control of her car on our driveway’s steep slope and slammed into the back of our car. The indicator light showing that the door is not closed all the way has thereafter remained forever lit. Another dent came from a teenage girl who rear ended us while talking on her phone. When I inspected the damage, it didn’t seem worth taking her insurance information given the condition of the rest of the car. I immediately regretted it when we started driving again, and my kids noticed her get back on her phone. I leapt from my car and ran over to her, shaking with rage and shouting at her like a lunatic in the middle of sleepy little Crozet.

This sticker is from my first teaching job in Charlottesville, or Lynchburg rather. I would leave in the early hours of dawn and drive an hour and fifteen minutes to get to the campus of Randolph-Macon Woman’s College. 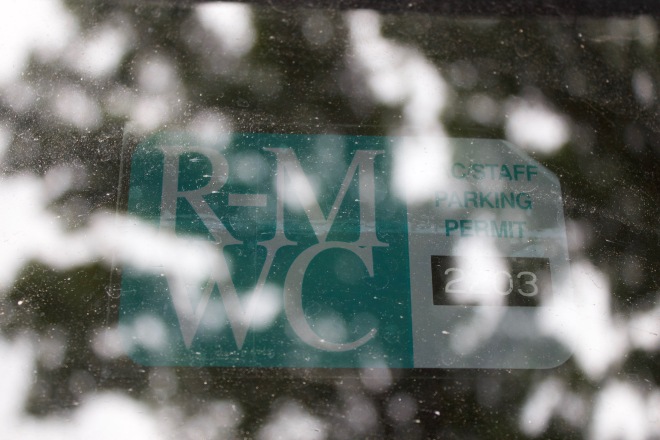 When I first went to get the faculty parking sticker, the woman behind the counter explained to me that students needed to go to a different office to get their parking passes. No one would mistake me for a college student now. And now Randolph-Macon Woman’s College ceases to exist. (It’s become Randolph College).

We’ve been expecting car trouble for years, but it has continued to hum along without complaint or issues. We have since inherited two back up cars, knowing that the day would eventually come when we would have to give up our minivan. Only very recently has it begun to show mechanical signs of age. Yesterday, my husband took it to the dealer and they diagnosed a very expensive transmission problem. It is time for our beloved minivan to ride off into the sunset. I spent last night cleaning out the car in preparation for donating it to NPR. Among many other things, I found the tray of an old stroller, spilled snacks that could very well be fifteen years old, cassette tapes, DVDs…

I know it doesn’t make sense to grieve for a chunk of metal, but I do. It has carried our babies home from the hospital. It has held car seats and booster seats. That little boy in the first photo just learned how to drive in it. For fifteen years now our car has safely ferried our family for miles and miles. At almost 270,000 miles, we could have circled the earth ten times. We could have driven to the moon and a good bit of the way back down to earth.

After all this, what is there left to say, but this:

Well done, my good and faithful Chariot of Fire. Thank you.

2 thoughts on “My Chariot of Fire”