It will always remain one of the great unfathomable mysteries of life how two people who heavily skew toward the neurotic produced this cool customer: 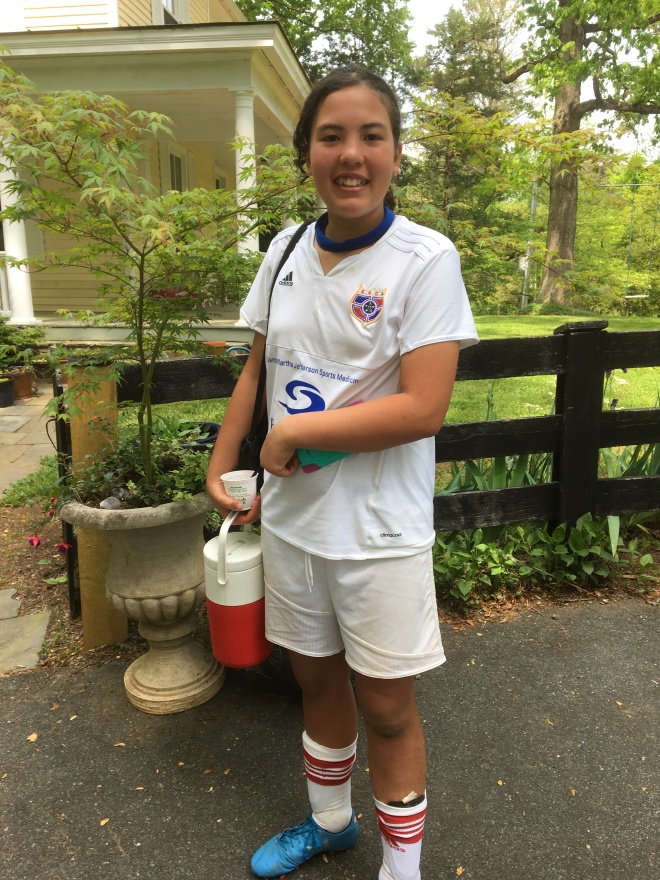 It’s been a stressful few weeks. I’ve been waking up repeatedly in the middle of the night for no good reason at all and have been finding it hard to get back to sleep. When I finally surrender to the day and get out of bed for good, I find I have to unclench my aching jaws.

One of the things that was causing me a certain amount of anxiety were the logistics of this past weekend. Two of the three kids had soccer tournaments in two different states. With my husband out of the country, I wasn’t quite sure how it was all going to shake out. I ended up taking my daughter to North Carolina and leaving the boys in Virginia so that my oldest son could play his games in Charlottesville, and so that he and his brother could take care of our ever-growing menagerie.

At the end of a rainy first day, my goalie ended up looking like this:

The next morning we set out for the third game. As we walked toward the field I read a text message announcing that after another night of torrential thunderstorms, the whole tournament would be decided on penalty kicks – five per team.

“Do you think that’s a joke?” my daughter asked.

We watched an official attempt to prep the area by the goal. Again and again he pulled at the water with a large broom…a Sisyphean task if ever there was one.

A mother of a teammate came up to me and asked if my daughter was nervous. We both glanced over to find her doing a goofy dance with a grin on her face, her arms waving like noodles.

“Guess not!” I said. My stomach, on the other hand, was roiling with nerves. And I wasn’t the only one who was anxious. The parents formed a tense, fidgety row along the sideline as we watched our girls lining up to take their shots.

As my daughter squished her way to the box, you could see water coming out of her cleats, which were already soaking wet after just a few minutes of warm up.

She dove for the first ball and landed with an audible splash:

Photo by Forever Photography By Elissa

She stood up, drenched with dirty rainwater and spitting out mud and bits of grass, but holding the ball she had saved.

Our cheers turned into laughter when she turned to look at me and shouted, “THAT WAS NOT WORTH IT!”

Eventually, she took the fifth kick for her team. As she stepped up to the line, the referee kindly wiped the mud from her eyes before she took her shot:

Here’s mud in your eye!

She got her ball in, but her team lost the tournament. Was my girl sad?

I wish I could be as wholeheartedly fearless as this girl. I wish I could pick myself up after a fall with a rueful smile and a quip. I wish I could wring humor out of the most miserable of situations…When I grow up, my goal is to be just like my #1 goalie.