This one’s dedicated to my husband, my beloved scholarly couch potato. 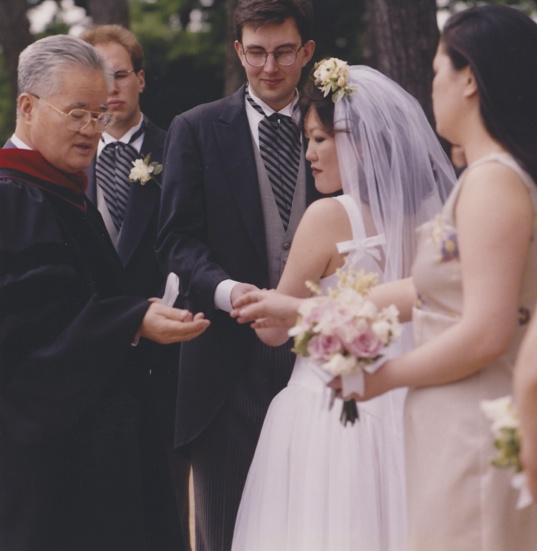 When I brought my future husband home to meet my parents for the first time, my father immediately recognized a kindred spirit. He watched knowingly as my fiancé gazed in wonder and admiration at his groaning bookshelves overflowing with exactly the same kind of scholarly tomes that he himself loved to read.

The day before our wedding, my father took me aside to give me the only piece of marital advice I ever got from him.

“If you want to have a happy marriage, don’t expect him to be handy, or to do things around the house. Basically, he’s a scholarly couch potato. All he’s going to want to do is sit around all day long reading his books. Let him.”

I thought this was hilarious. My dad’s own attempts to be “handy” have often ended badly. One of my earliest memories is particularly horrific – I remember seeing my dad coming into the kitchen with a river of blood gushing from his knee. He had just chopped it with an axe while trying to split a log. On another occasion, he cemented over the dryer vent by mistake. How many times have I heard my mother muttering darkly to herself, “He can do nothing!“? (Nothing but write more than fifteen books and accumulate two doctorates, a masters, and two bachelors as a non-native speaker in this country that is).

My dad had peered into the depths of my future husband’s soul and had found it to be the perfect mirror of his own. He had dispensed his paternal wisdom in an attempt to create for his son-in-law, his fellow scholarly couch potato, the life he himself craved. I foolishly told my husband what my dad had said about him, thinking that he would take it for the compliment that it truly was.

During the first year of our marriage, we lived in my parents’ house, which was vacant while they were living in Korea. We had just left New York City where supers took care of any maintenance issues in the apartments we had lived in. Now, in the heart of suburbia, we were faced with the care and upkeep of an aging house.

Still stinging from my dad’s assessment of his practical maintenance skills, my husband set out to prove him wrong. There was nothing he wouldn’t tackle. Leaky faucet? He’d diligently watch youtube videos to figure out how to fix it. Elecrical issue? He’d work at it relentlessly, cursing like a sailor, deaf to my pleas to call an electrician. He obsessively tended to the lawn, brushing off my suggestion that it would be better to let the grass grow a little longer before cutting it. The pièce de résistance was when he waterproofed the basement, which had been prone to flooding. He may very well have shortened his life span with the highly toxic chemicals he had to use in the process, but when he finished he crowed in triumph: “How’s THAT for a scholarly couch potato?!”

As the year dragged on, I could sense that his spirits were flagging. Each hard-fought battle with a blown fuse or a shower head that needed replacing took its toll, and in the end the cost benefit analysis proved too unambiguous to ignore. He came to me one day with shoulders slumped and said in a defeated voice, “Your dad’s right. I am a scholarly couch potato.”

Somehow, dear reader, that admission made me love him all the more.