“What is it with you and animal husbandry?!” I’ve heard my husband say more than once in a voice laden with anxiety and despair when I’ve fantasized out loud about having a mini-farm with cute animals only, or getting a couple pet goats, or sheep, or maybe a few ducks…One day the topic of bees somehow came up, and I was suitably shocked when he actually expressed an interest in setting up a beehive in our backyard.

My friend Allie happens to have a couple honey bee hives of her own and an extra bee suit. She agreed to give me a tutorial and to let me hang out with her while she checked on her bees. It was a magical experience! Extremely hot and super sweaty…but magical nonetheless!

Allie was in the process of combining the two hives she keeps. One of the hives was failing. She thought the colony’s queen may have died, because she hadn’t seen any baby bees in a while. She had stacked the weaker hive on top of the stronger one, separating the two with a layer of paper that had been pierced in a few places. Eventually, the bees in the lower compartments chew their way through the paper to reach the upper box. By the time the bees make their way up to the top, the distinct scents of the two colonies have commingled. Instead of confronting their enemies in an epic battle to the death, the two colonies think they’re all part of one big happy block party.

I was put in charge of the smoker…

I would periodically puff smoke at the bees to get them to move out of the way and to calm them down a bit so they didn’t get too agitated when Allie moved their boxes around. 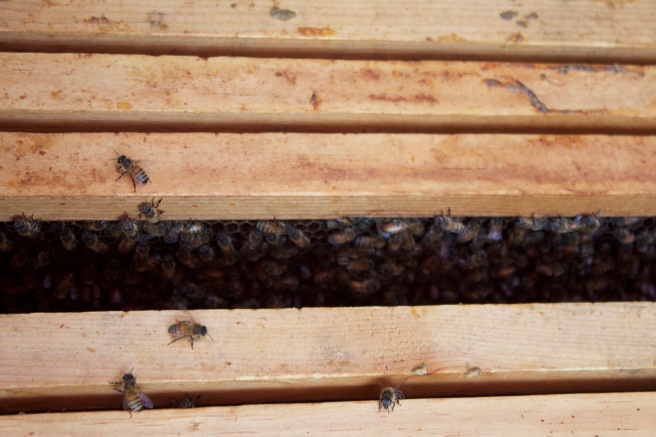 Allie discovered that the bees were creating a queen cell to possibly make a new queen:

Beekeeping was a lot more work than I was expecting it to be, and I’m not sure if we’ll be setting up a hive of our own anytime soon, but I’ll definitely go back to help Allie with her bees…Maybe when it’s cooler!