A few months ago, I offered to put all of my mother’s old photos together in an album for her. I was finally able to hand her the finished album the last time I went to visit my parents in Arlington.

There were photos I hadn’t seen in years, including this baby picture of me:

In almost all of my baby pictures, my hair is soaking wet, because in its natural state it looked like this:

My mom told me she burst out laughing when the doctor handed me to her for the first time. Who could blame her?

And then there’s the one my sisters refer to as my refugee photo:

When I was eight months old we moved to Korea from America for a year or two. The pile of shoes at the door in this photo is the telltale sign of a Korean household. I especially love the two pairs of classic Korean pointy toe rubber shoes to the left.

My sisters explained to me that in this photo, they are both wearing school badges. The sister sitting next to me on the right is wearing a special badge, because she was class president.

As my oldest sister put it, “Even then she was an overachiever.”

This photo was the biggest surprise:

I puzzled over it for a while, trying to seek out a familiar face. I was expecting to find my mother or one of her siblings in the photo. All of the oldest family photos I’ve ever seen are from my mother’s side of the family. For all these years, I thought the earliest photos of my father were taken when he served in the army: 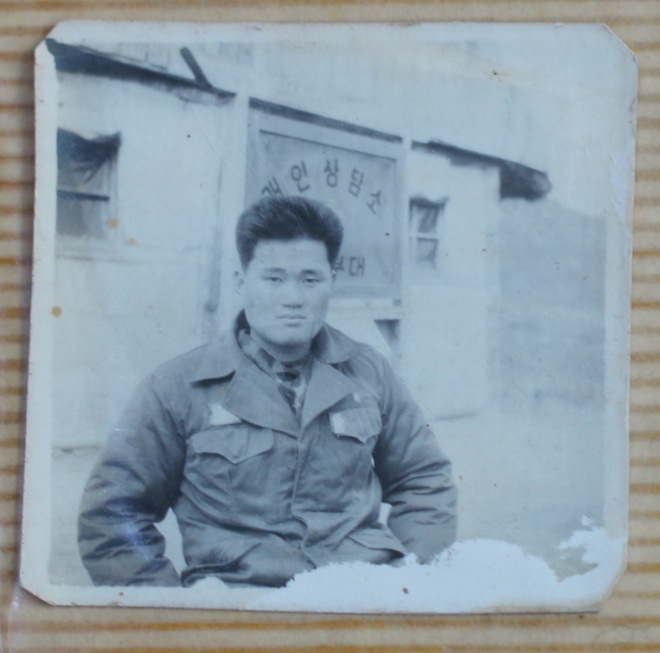 My father grew up in the country. His family, like all Koreans of his generation, struggled  through the privations of war and occupation. When he was eleven, typhoid fever struck down almost everyone in his household. His father did not survive. His mother was left with young children and a farm to run. Time and money were scarce, and there was certainly none to spare for picture-taking.

I showed the photo to my mother, thinking that she would be able to help me figure out who was pictured there. She glanced at the photo and shook her head. She handed it back to me and suggested that I show it to my father, who might know something about the picture.

When I showed it to him, I was dumbfounded when he said, “That’s my elementary school graduation photo.”

He pointed himself out to me. He’s in the third row from the top facing left.

“Do you know why I’m standing like that? I knew I couldn’t ask my mother for money to continue my education. I understood that we couldn’t pay the school fees. I was so downcast and ashamed I couldn’t even look at the camera.”

At the age of thirteen, my father ended up striking out on his own. He put himself through another year or two of schooling by working in a watch factory. As a young man, he made his way to the U.S., where he earned a Bachelors Degree, multiple Masters, a Doctorate, and a J.D. Eventually, he became a professor.

This photo, the only existing one of my father as a child, captures a moment of despair in his life when that future was unimaginable.