I’ve just added a new Portraits tab. Please check it out, and let me know if you’d be interested in having me take portraits of YOUR family!

WARNING: If you haven’t had dinner yet, DO NOT READ! And, I apologize in advance for this post.

As you might imagine with a husband who teaches philosophy for a living, conversations around our dinner table tend to be rather highbrow. Here, for example, is what the professor had to say when he finally made it back home in a cast after his fall down the mountain our family now routinely uses air quotes to refer to as: “Mount Pleasant.”

“You think the leg cheese under your shin guards is bad after a soccer game,” he said to my daughter, “Imagine how bad it will be when my cast comes off. My leg will probably be completely coated in a slimy layer of ripe brie.”

To put what happened next into context, you need to know that my fourteen year old boy lives to shock us with gross stories he’s heard from his fellow pubescents or gleaned from the bowels of the internet. He is also going through a growth spurt that makes him ravenously hungry. You can’t even imagine the staggering quantities of food he eats. All this to say, it takes some high octane intellectual firepower to both disgust him and cause him to lose his appetite.

He recoiled in a rictus of visceral horror, dropped his fork with a loud clatter, and pushed his plate away.

“DAD! We’re eating! And this salad has feta in it. I seriously can’t eat any more.”

Pray for me, friends. It’s going to be a very long few months…

My husband has been wanting to take our oldest son on a hike for ages. This Saturday they seized the opportunity to go to Mount Pleasant in the George Washington National Forest.

In the morning we bade a fond farewell to our intrepid hikers: 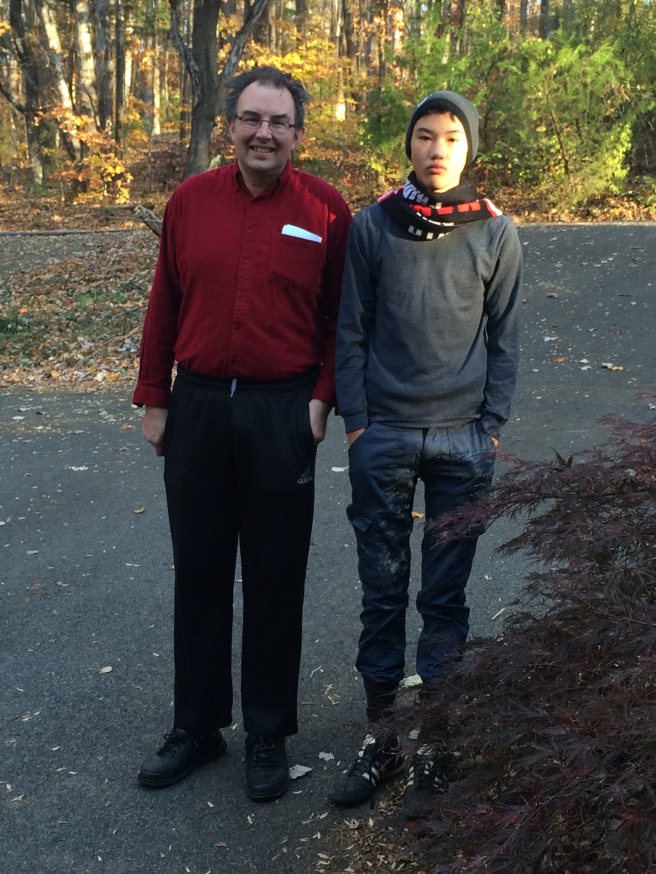 and went about the rest of our day: 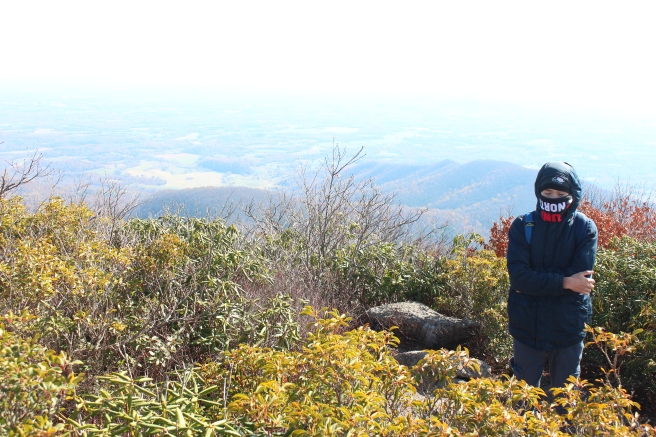 “It was freezing up there!”

That afternoon I received this text from my husband:

I went to pick up my son at the ER to spare him the inevitable, lengthy wait for a verdict and his dad’s eventual discharge. Back at home, I continued to check in with my husband over the next several hours by text:

When he was finally home with a diagnosis of a multiple fracture, he explained what happened…

After reaching the summit, they started to make their way back down toward the trail head. My husband’s boot caught on a rock hidden by fallen leaves, and all six feet three inches of him went crashing down. Unfortunately, they were still quite a distance away from the car.

“It was agonizing. Believe me, you would not want to walk two miles down a mountain on a broken ankle,” he told me that evening.

“Uh, yeah. As we all know, I wouldn’t want to walk two miles down a mountain, period,” I replied…”Why didn’t you call for help?”

“I didn’t want to cause a fuss. I would have been too embarrassed,” he said…”I hobbled along, and whenever anyone passed, I’d straighten up and pretend like nothing was wrong.”

He mimicked how he would give a cheery wave and say to every passer-by, “Beautiful day for a hike!”

I shook my head.

“Remember when your dad fell into a ravine on his hike and he got a gash on his forehead that required stitches?! And you were so upset with him, because instead of getting help, he just made his way back to his car and drove home for hours gushing blood from the gaping wound? Remember?! Remember how you scolded and scolded him for doing that?! You are your father’s son!”

“There’s a HUGE difference!” my husband protested, “My dad hid behind rocks whenever he saw anyone on the trail!”

“NO DIFFERENCE! You two are EXACTLY the same!”

“Well,” my husband conceded, grinning…”That’s the spirit that built the great British empire!”

It might explain the fall of the great British empire too…

Today is the 25th anniversary of the fall of the Berlin Wall. Twenty-five years ago, I was a junior in college working as a teaching assistant for my school’s foreign language study program in Lyon, France. Armed with our Eurail passes and someone’s Lonely Planet guide, a group of us took an incredibly long train journey to Berlin…

Changing of the guard

Changing of the guard 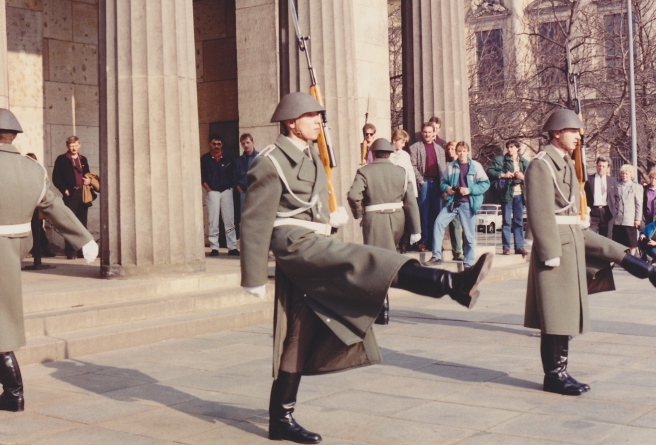 Statue of Marx and Engel 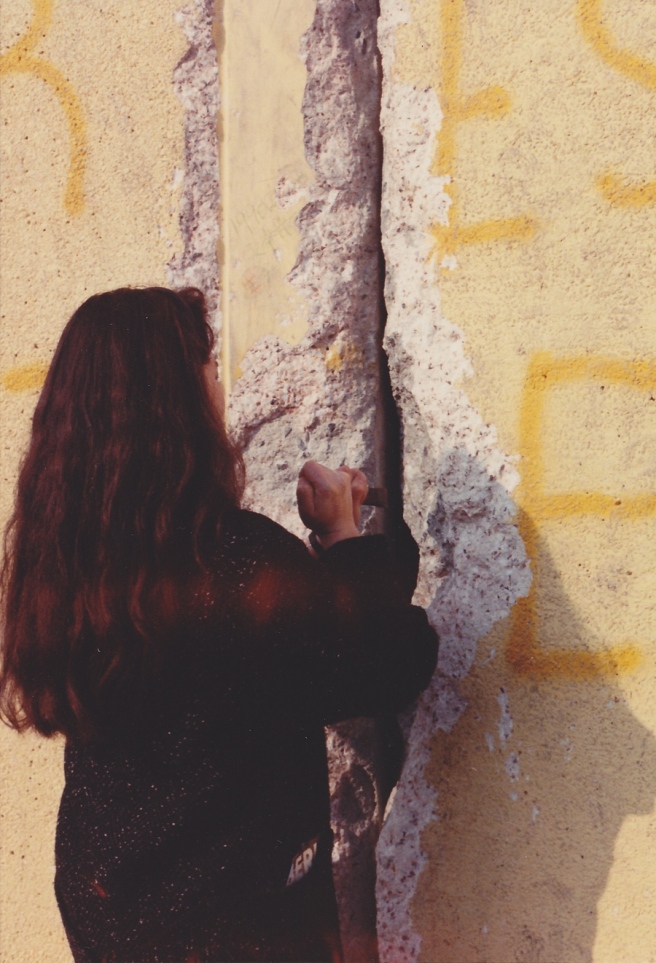 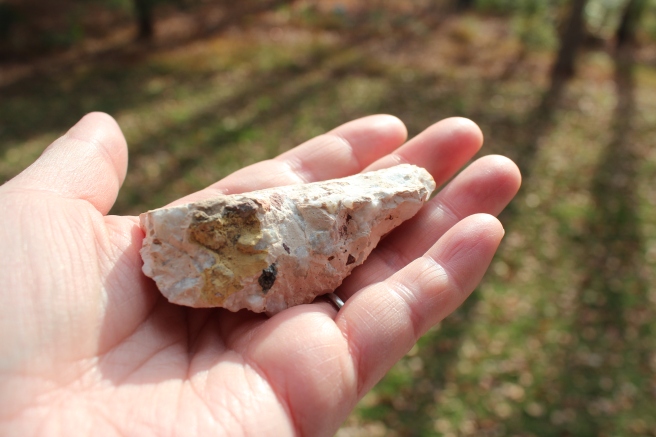 my piece of history

Please read my friend’s musings on the Berlin Wall.

My dad was working in Korea when my first child, his first grandson, was born. He was finally able to meet him when we all converged in Minneapolis to celebrate the wedding of my brother and sister-in-law.

All weekend long, as soon as my dad would spot us, he would scoop his grandchild from my arms into his own.

Because I can be astonishingly dense, the first time I said, “I’m OK, Dad. I can hold him.”

The words “I love you” have never once fallen from my father’s lips, but that weekend I heard those unspoken words when he gazed upon his grandson and said wistfully, “You won’t believe it, but in the blink of an eye, he’ll be grown up and out the door and you won’t even know how it happened.”

Here’s that baby fourteen Novembers ago…

I blinked and this happened:

Today my son was wearing a t-shirt my husband used to wear when I first met him. Today we measured him, and the boy who, I swear, was a baby only yesterday, is now 6 feet tall!

Oh, Time, our greatest friend and foe! May I remember that every minute of this precious life, even in the most challenging of times, is a gift of immeasurable value. May I not squander the days that I have with these beloved children under my own roof. And when they eventually do go out that door, may they fly back home now and then to my loving arms.

Here’s what happens when you have adult ADD. You say goodbye to your husband as you head out the door to go to work. He replies with a smirk, “Bye! See you in 40 seconds.”

After a moment of confusion, you realize the impertinence behind this statement. He fully expects you to come back into the house (maybe several times) to fetch something that you’ve forgotten. And why shouldn’t he? After all, it’s happened every single day for the past seventeen years you’ve been married to him.

“How rude!” you say severely, but you chuckle nonetheless. Your mirth fades as you realize it’s really cold, and you haven’t even left the garage. You ponder your equally unappealing choices.

A) Slink back into the house to fetch the coat that you’ve forgotten, but clearly need?

B) Do you preserve your pride, get in your car, and resign yourself to freezing your @$$ off all day long?

Now that my limbs have finally thawed, I can pound out my sad little tale…

Wish I could lounge around in my tiara and pjs, eating candy every day…