A couple weeks ago I went to Korea for work. I badgered my sister into going with me, so I got to play a little too!

Things were still hopping when we arrived at our hotel in the Gangnam district in Seoul very late on Saturday night. The first thing I noticed was that there were foreigners everywhere and that I could hear a lot of people speaking English. They all seemed to be coming from a side street right next to our hotel. When we investigated the next morning we found this rather dramatic entrance to a nightclub:

The last time I was in Korea was about five years ago. At that time, it was still extremely rare to hear English being spoken or to see any foreigners. People would openly gape at my husband wherever we went, as if he were a space alien. The only English we ever heard was when children would run over to ours when we’d be hanging around playgrounds to practice saying “hello.” That was, in fact, usually the only word they could manage. Things have changed a lot in a very short amount of time.

Another thing I noticed this time was an overabundance of coffee shops:

and makeup stores. I spotted this at one of them: 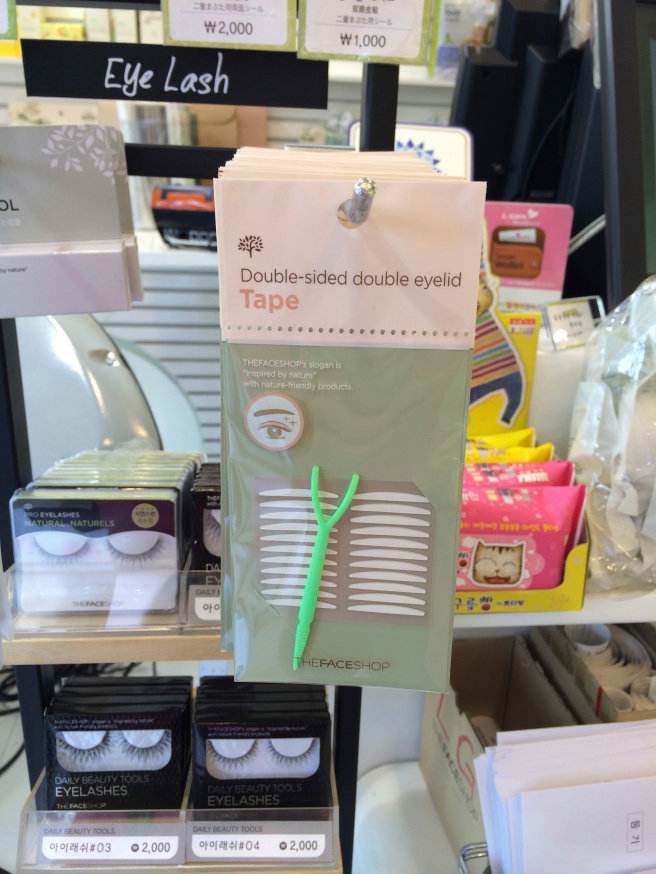 The minute you walk into one of these stores the saleswomen start plying you with free samples. Korean makeup is at the cutting edge, so those millions of little packets they press upon you are like pure gold!

On Sunday my sister and I wandered around Insa-dong, a neighborhood filled with antique shops, art, and handcraft markets. Weekends are a good time to go, because the main drag is closed off to vehicles and becomes a pedestrian thoroughfare. When you get off at the Anguk subway station, you have to go through a twisty rabbit’s warren of restaurants and inns before you finally reach the main shopping area.

She, Who Will Not Be Photographed

Of course, I had to stop and take photos along the way.

door handle with bat – a symbol of good fortune and longevity

We noticed that Insa-dong has become much more tourist-oriented in the last few years. It’s become a sort of Korean tchotcke strip. Apart from the many smaller shops and teahouses, there are a few larger souvenir stores dotted along the main street as well. There’s also a mall called Ssamziegil, which is fun to explore. It’s designed like the Guggenheim spiral, so you can go up to the top and hit every single store as you make your way down. Very satisfying!

For lunch we had tteokbokki, traditional Korean street food. There are pojangmacha, or street vendor tents all over the city. Many of them are open into the wee hours of the morning, so you can get your fix any time of the day or night. We took a seat on little plastic stools at a plastic table in a rudimentary tent. Armed only with a long toothpick, we ate tteokbokki, a dish made of cylindrical, super chewy rice cakes swimming in gochujang: a spicy, slightly sweet, fermented chili sauce. So delicious! Notice the plate is covered in a plastic bag for easy clean up. 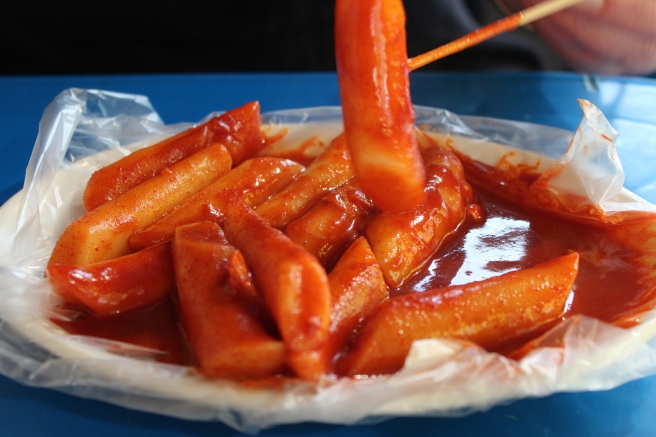 For dessert we got bobki:

My sister remembers getting one of these every day after school when we lived in Korea. It’s a sort of candy made of sugar and a little bit of baking soda. The vendor melts the two ingredients together and then pours it out onto a flat surface and stamps a design into it. My sister remembers that if you could break off the edges cleanly to leave only the star shape inside, you would get another one free.

To this day, my brother bears a scar on his arm from our secret attempts to make this ourselves when we were living in Pennsylvania. You can try this at home too! (Making the candy, that is. Not burning your little brother)! Put some sugar into a metal ladle and melt it over a burner, stirring all the while. Once the sugar melts into a clear liquid, add a pinch of baking soda. It will become a caramel color and the mixture will get slightly foamy. At this point, you pour the mixture out onto a plate or other flat surface. Press it with another flat surface to get a thin flat disk. That’s it! Easy and yummy!