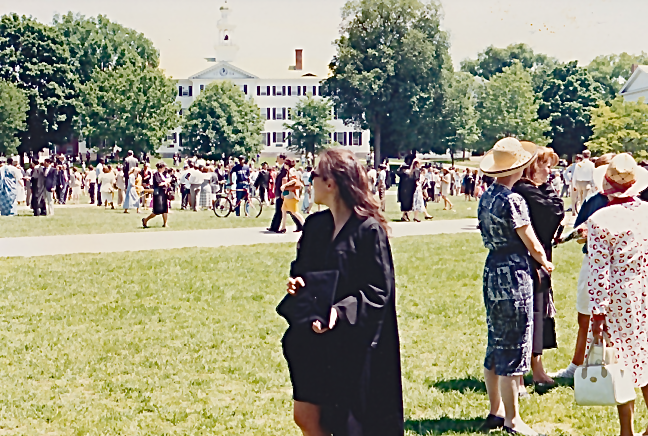 I was scrolling through my emails on Friday when I noticed the name of one of my former Russian professors at Dartmouth. He was posting on SEELANGS: the Slavic and Eastern European Languages and Literature, a listserv for the rare breed of eccentric who makes a life of studying such things.

“Oh no!” I groaned out loud as I saw that it was an obituary he had written for Richard Sheldon, one of his colleagues and one of my beloved Russian professors. Lately, notices of their deaths have been coming with distressing frequency.

Vox clamantis in deserto is Dartmouth’s motto: A voice crying out in the wilderness. For four years, I was that voice crying out in the wilderness and I was crying, “WHAT THE HELL AM I DOING HERE?!” I was not white. My parents were not rich. I was not conservative. I was not athletic. I did not like being outdoors. I did not like to drink. I hated the cold weather. Further magnifying my sense of alienation was the fact that everybody else seemed to be delirious with joy to be there. Clearly, there must be something deeply wrong with me.

Here’s how I arrived:

It was September 1987 when my parents and I rolled into Hanover, New Hampshire for the first time like a raggedy tribe of Korean pimps in a grotesquely large, winged white Cadillac, vintage 1970. My parents had two daughters in college and a third about to start. There was not a dime to spare. Until very recently, my dad’s ride had been a brand new car, an unexciting, but eminently sensible, American-made beige sedan. It was the first new car he had in more than a decade. Shortly before I left for college, my sister got into a horrifying accident in which the car flipped multiple times and she was flung from the car into oncoming traffic on the highway. Miraculously, she walked away from the accident with a slight concussion. The car? Scrap metal. A friend of my dad who owned a body shop gave him the Cadillac to tide him over until he could get a new car.

It had been fun driving that car around Arlington, Virginia with my friends the summer before I left for college. They laughed out loud when they saw it for the first time and immediately christened it “The Batmobile.” It would take at least two or three 360 degree revolutions of the wheel to steer the car around a corner. When we finally did make the turn, everyone sitting in the bench seat would go sliding in slow motion for what seemed like an eternity until they ended in a scrunched up heap against the car door, laughing all the way. It was campy and fun then; now as my dad docked the hulking beast by the side of the pristine Dartmouth Green to consult a map, it made me feel glaringly, comically conspicuous. I may as well have landed on the Green in a space ship.

A white-haired gentleman dressed in a natty forest green blazer and a bow tie briskly walked up to our car to give us directions. I willed myself into oblivion, as I sank deeper into the depths of the car, which was lolling like a beached whale in that perfect New England landscape. I suppose it was fitting that I should arrive at this place in such an ignoble way. It was the first day of four of the most trying years of my life. I never felt more alienated, more like a fish out of water than I did at Dartmouth.

Eventually, I found my tribe. It turns out, they were all hanging out in the Russian Department. People who are attracted to Russian and Russian literature tend to be unconventional, maybe even slightly strange. THIS was where I belonged!

Professor Sheldon was one of the professors who made my four years in the wilderness bearable. His large eyes rimmed with thick lashes gave him an otherworldly, vaguely Dr. Seussian appearance. He habitually seemed to be staring off into some far distant shore. He was always slightly disheveled. His students would affectionately tease him for his sartorial choices, especially for his outlandish ties. He would smile bashfully and good-naturedly. We sensed that he returned our affection. We sensed that we were safe with him.

This is how I left Dartmouth:

On my last day at Dartmouth I processed across the Green. I walked flanked by classmates I didn’t know. The only thing we shared was that all of our names began with “K.” I knew my family was out there in the crowd somewhere, but I couldn’t see them. I walked with mixed emotions. I was elated to be finally graduating, but I also felt disappointed in myself for not having made more of my time there. I blinked back the tears that were forming in my eyes, feeling as lonely and vulnerable as I had that first day when I arrived with my parents. Suddenly, I heard my name being called. I turned my head to see all of my Russian professors standing in a cluster, benevolently smiling, waving, and cheering for me as I walked by.

I’m sad I never got the chance to tell those professors how much that meant to me at that moment. I never got a chance to say that because of them, I left that place feeling like I had belonged after all: to the very best, most civilized and humane corner of the wilderness.

Spasibo, Professor Sheldon, Professor Loseff, Nina Pavlovna, and Professor Scherr. You meant the world to me.

3 thoughts on “Vox clamantis in deserto”