When we get together, my family tends to do a lot of “sitting in the basement.” This is family code for sitting around the house all day long chatting with breaks for eating. Being an indoorsy sort of person, this inactivity suits me to a T. This weekend we would have carried on as usual but for the fact that the weather was so freakishly warm and that my best friend invited us over for a Christmas party. It turned out to be a busy but most wonderful, wonderful, and out of all whooping kind of Saturday.

Feeling morally obliged to do something outdoors with the kids, I took them to the National Zoo. My dad gave me a transformative piece of advice as we left the house: “It’s one long hill. Park at the bottom. When you’re tired after walking around, it will be easier to walk downhill to the parking lot.” This simple suggestion turned what usually is a Metropolitan Museum of Art sort of slog into an efficient Guggenheim sort of experience. We parked at the bottom and walked all the way to the top of the hill, not stopping at all until we got to where the pandas are housed. We made our way leisurely back down the hill, stopping off at the enclosures and exhibits along the way. At the Small Mammals building, the kids were captivated by the Golden Lion Tamarin Monkeys.

They were so enamored of the little creatures, they were ready to trade in their beloved dogs for a monkey. They got so carried away with their little fantasy that they started arguing about in whose bedroom their new pet monkey would live.

Their favorite spot was Amazonia, a building that’s all the way at the bottom of the hill. It’s somewhat hard to find, but it’s definitely worth the effort. The two-story exhibit is designed to be like a tropical rain forest. There are huge fish on the ground floor level. 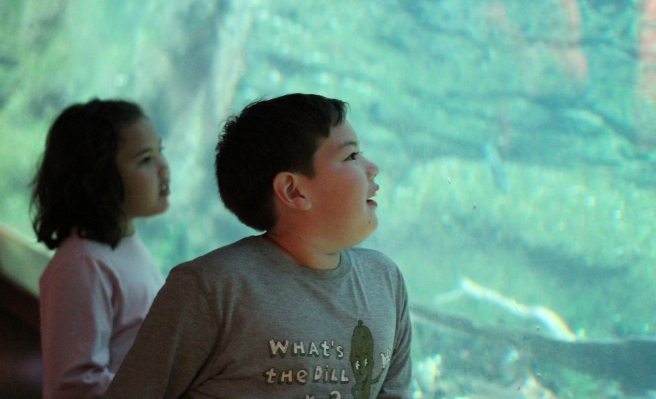 The second floor opens out onto lush vegetation and birds and animals everywhere.

What makes this part of the zoo special is the fact that there is no separation between you and the animals. We spent some peaceful moment communing with a couple of older sibling monkeys who, according to the docent, used to get in trouble all the time, but in their old age now spend their days grooming each other and napping in the trees with their tails entwined. She told us to look out for the Roseate Spoonbill who had just woken up from her nap, and we were delighted to spot her just around the corner.

That evening we headed to my friend Janel’s house for the best Christmas party ever:

Pretty and yummy, too. 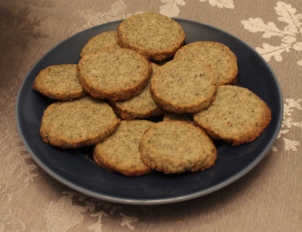 After dinner, we gathered in the living room, where I couldn’t tear my eyes away from this gorgeous display of origami birds swooping across the wall. Janel made it herself: 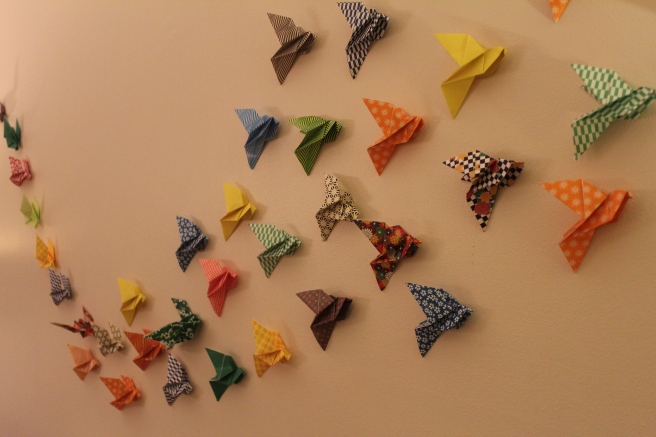 Wonder Woman also made Christmas crackers filled with crowns, riddles, lollipops, and some bling, too! 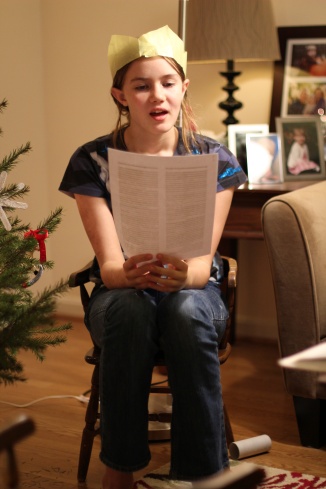 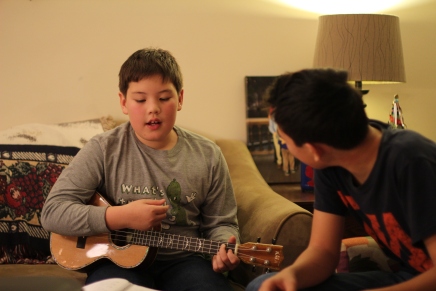 Had a quickie photo session: 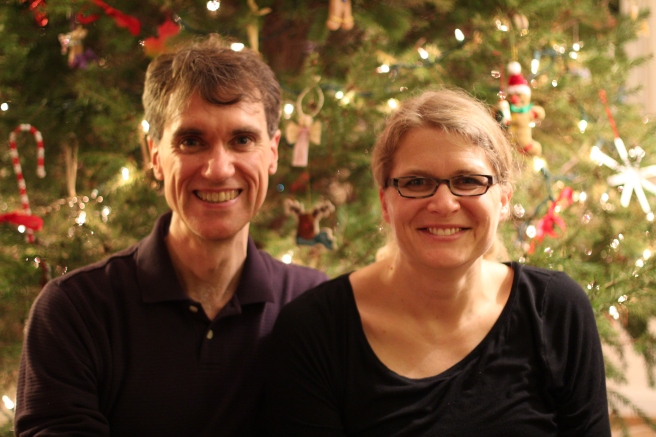 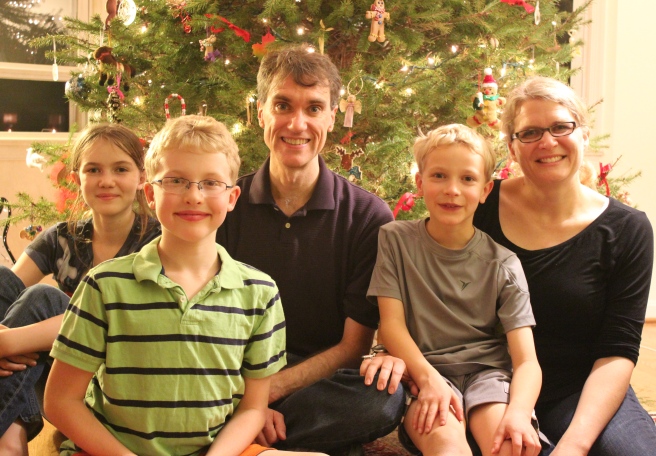 And then it was time for “Minute to Win It” games:

In the first game, a tissue box filled with ping pong balls is tied to the player’s waist. The player has to get all the balls out of the box, while keeping both feet on the floor: 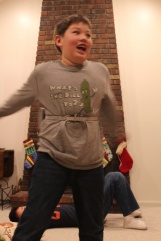 In the dice game, the first person to stack six dice on the end of a popsicle stick held between the teeth wins:

The thrill of victory: 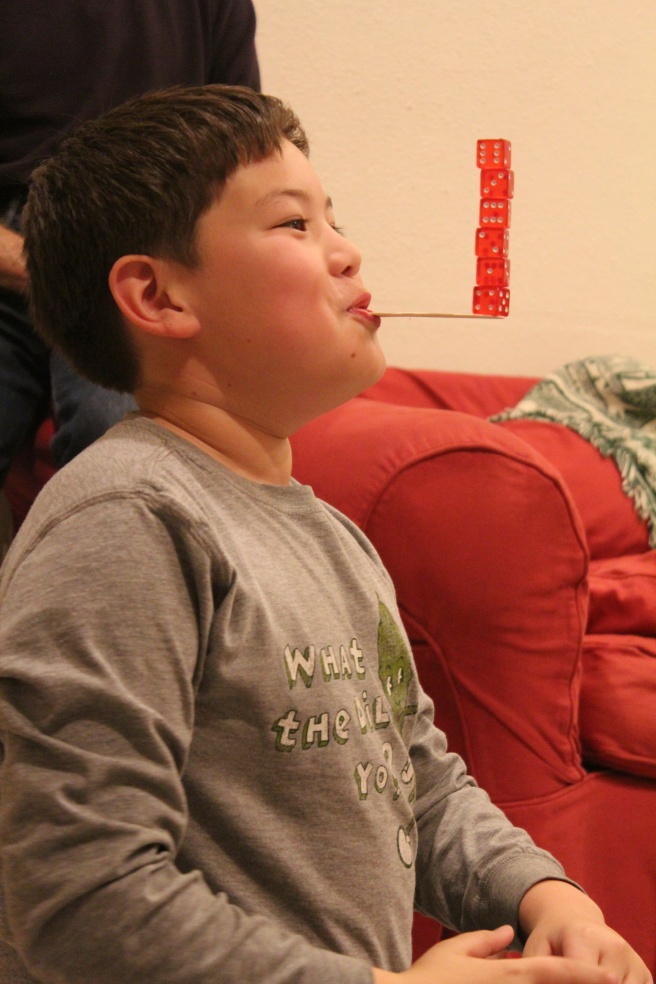 The agony of defeat!

The last game involved very attractive headgear made out of tights with a ball in the end of one of the legs. The object of the game was to knock as many filled water bottles as possible with the ball-in-tights-pendulum-hat, while keeping one foot on either side of the line!

The kids were having so much fun, they begged for one last bonus round before we headed home. For this game they had to start with a cookie on their forehead and move it down to their mouths, using only facial muscles!

T had a tough time of it:

…but her persistence eventually paid off:

It was a lovely way to start the holiday season. The only thing missing was Colin, who is still feverishly trying to finish an article before we set off for our travels to Princeton. We’ll be spending the holidays there with our family.

Tomorrow I’ll post our annual Christmas video, starring my daughter, and then I’ll be back here again in the New Year.