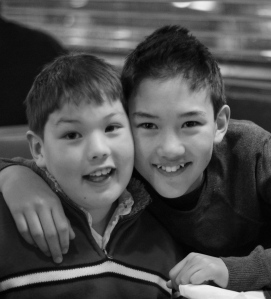 Things were looking dire for my middle child this morning. Yesterday, he spent the entire day in bed without eating a thing. This morning he felt even worse. He looked gray and was hunched over in pain. He clutched his belly as he hobbled down the stairs. My husband was convinced he had appendicitis.

With zero medical training between us, we are swift and confident in our diagnoses. We’ve read WebMD and have had three children after all. We were especially confident that we were dealing with appendicitis, because our oldest child had it three years ago.

We quickly made a game plan that involved a complete shift in our usual routine. Colin took our daughter to school and I drove my son’s carpool. Colin would take our sick child to our family medicine practice to be evaluated and I would leave work to meet them there once they arrived.

“Poor T. I hope he’s ok,” I fretted as I drove his older brother and his friends to school.

“Me too. And, I hope if he does have appendicitis and he has to have surgery, you don’t do what you did to me when I had it.”

“What are you talking about?”

“Remember how the doctors wanted me to stay an extra night, but you were so desperate to get out of the hospital you made me walk around the nurse’s station to prove that I was ready to leave? And I was in so much pain, but you made me do it anyway.”

Ummm. This absolutely shocking and horrible allegation is sort of true.

I was desperate to get out of there. But in my defense, as I’ve mentioned before, my son feels things more keenly and expresses those feelings more vociferously than the average child. After his appendectomy, the doctors and nurses kept checking on his recovery with their pain assessment tool, the one with a series of  faces grimacing in increasing degrees of anguish. You could tell they were expecting him to point to the slightly frowny It’s OK, I Can Take It Face when asked how much pain he was experiencing. Instead, he’d always, always point to the Holy Mother of Pearl, I’m In Mortal Agony Face.

Staying in hospitals is awful for so many reasons. What made it especially miserable this time was that we were sharing a room with a little toddler whose parents weren’t spending the night with him. The poor boy cried all night, but I wasn’t allowed to pick him up or comfort him myself. Instead, I had to repeatedly call for a nurse to come attend to him throughout the night. It was heartbreaking.

I had to get out of there, and I was convinced that it would be much better for my son to rest and recuperate at our own house. The condition put upon his release was that he would have to be able to walk without too much difficulty. To prove that he was mobile, he would have to walk all the way around the nurse’s station.

I whispered a little pep talk in his ear before he set off.

“I know you’re hurting, but try not to make it seem like such a big deal, OK?”

Hunched over like a shrunken, little old man, clutching his IV pole, the poor boy staggered around the nurse’s station as if he were on the last mile of the Bhutan death march. I hovered in the background whispering encouragements, “Come on! Straighten up a little! Put a little pep in your step! You can do it!”

I fully expected my middle child to be admitted this morning. I was mentally preparing to atone for my past sins by letting him stay as long as he needed to in the hospital. Instead, as soon as he got to the doctor’s office, he magically came back to life. He regained his color, his appetite, and his vim and verve. And despite the fact that the doctor looked like he couldn’t have been more than twelve years old, and made his diagnosis without even consulting WebMD, we gladly concurred when he declared that he merely had a virus and sent us on our way.