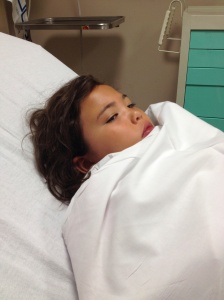 I’ve been at the hospital with my daughter for a couple days. She suddenly fell ill on Saturday while we were visiting with our family in Arlington. She has an as-of-yet unidentified infection, which is causing her to have a fever and headache. I’m hoping she’ll be discharged on Monday. I’m really hoping that she’ll be fully recovered by Friday, when she, her brother and I are supposed to fly to England to reunite with the rest of our family, who flew there ahead of us last Wednesday.

Being in the ER and at the hospital brings back so many memories…Last night when her gurney was wheeled into the room where they do chest x-rays, I had to laugh a little despite the situation.

“Do you remember the last time you were in this room?” I asked my daughter. She looked at me blankly.

“Remember when you swallowed the ‘golden screw’?” I asked.

She glared resentfully at the unwelcome reminder. (Kind of like this):

A few years ago, she came to me with a scared, guilty look on her face. She informed me that she had accidentally swallowed “a golden screw.” After this initial confession, her gut survival instincts kicked in. She worked out a story and she tenaciously stuck to it as if she’d been schooled by the US Special Ops on how to withstand brutal interrogation tactics. That day, scores of doctors, nurses, technicians, and family members asked her variations of the same, obvious question: “Why did you swallow the screw?” At first she was patient with her interrogators. She responded in a brisk, unapologetic, business-like tone: “It was an accident.”

People would insist on pressing her for a little more information, “But how did the screw get in your mouth?” or “Why was the screw in your mouth?” The girl never wavered from her version of the events. “It was an accident” was all anyone ever got from her, though by the end of the day her patience was wearing thin. She could no longer hide her exasperation with the relentless repetition of a question she had already answered so clearly and conclusively. When asked the same irritating question, her little shoulders would heave with an exaggerated sigh. She would reply for the umpteenth time, “IT. WAS. AN. ACCIDENT!” Although she didn’t actually tack on the word, “Dumbass!” you could tell that was exactly what she was thinking.

We have swallowed a golden screw. It’s been a rough couple of days, but there have been some sweet moments. I have been filled with gratitude for so many things and for so many people. When we arrived in Charlottesville at 9 pm on Saturday, my son urged me to take his sister straight to the ER. He reassured me that he would take care of our dogs and that he would be OK, even if it turned out that he would be left on his own if she were admitted. I was so proud of him. The ER attending happened to be his Sunday School teacher. He offered to swing by our house to check on him on his way back home when his shift ended at 1 am. In the morning our fairy godmother neighbor swooped in to bring Nicholas over to her house and took care of him until another friend came by to take him swimming and then back to their house so he wouldn’t have to spend another night alone. Other friends and family members have generously offered their help. At the hospital we have gratefully appreciated the kind ministrations of nurses, whom I wholeheartedly worship as higher beings.

Although the circumstances are lousy, it’s been good to have this time with my girl too. After she endured the traumatic experience of getting her IV put in, she said through her tears: “I feel so sorry for really little kids who have to get IVs.”

“You’ve been one of those little kids, too,” I pointed out.

With all the weight and experience of her seven years my daughter replied, “Yeah, but I’m not little anymore.”

Today we watched the men’s Wimbledon final. The most entertaining part of the game for me was listening to Tatiana’s expert running commentary. She reeled off stats and filled me in on the human interest backstories like a pro. She conked out from exhaustion before the game ended. When she woke up again we turned the television back on to see that Andy Murray had won the Wimbledon title. We cheered for Murray and expressed our sympathy for his opponent. I made her giggle when I said, “Oh look at that. Poor Djokovic only gets 1.2 million.” We’ve commiserated over the lousy hospital food. We’ve had chit chats about this and that. And tonight I sang her to sleep with one of our favorite old lullabies, Loch Lomond, in honor of Murray and our upcoming trip to Scotland.