Rite 13. It sounds ominous, doesn’t it? It’s way scarier than you can possibly imagine.

A few months ago I was sitting in church, innocently zoning out in my pew. The next thing I knew a bunch of kids I’ve known since they were toddlers were called to the front along with their parents. What followed was the single most devastating ritual I’ve ever witnessed. I began weeping uncontrollably. I felt keen empathy for the poor parents, many of them good friends of mine, who were standing at the altar with their children, completely exposed as they dissolved into quivering puddles of tears. It took every ounce of willpower I possessed not to make the sanctuary reverberate with my ugly racking sobs.

What I was witnessing was “Rite 13,” a relatively new tradition and liturgy created in the eighties by sadistic Episcopalians in Durham, North Carolina to torture unsuspecting parents of adolescents everywhere. (As if we didn’t have enough to deal with already). It was conceived as a Protestant version of the bar and bat mitzvah of the Jewish tradition. This rite of passage has been adopted by many churches, including the Presbyterian church my family attends. Around their 13th birthday, youth are invited to participate in this liturgy with their parents.

This past Sunday my almost 13 year old son went through his Rite 13. I’ve been dreading this Sunday ever since witnessing the first one. Not wanting to make a complete spectacle of myself and embarrass him in front of all of his peers and the entire church with my ugly crying, I trained for this Sunday like it was an Olympic sport. Here’s how it all went down:

Over breakfast we discussed strategy. My son offered to piss me off so I wouldn’t cry.

“OK. That shouldn’t be too hard,” I readily agreed.

He wasn’t convinced. He kept narrowing his eyes at me and saying, “You’re not going to cry, right?”

I cracked my knuckles and said, “Nope. It’s going to be fine. I’ve got this.”

I told him he had to look respectable. I pulled out a pair of wrinkled khakis from the pile of clean, but unfolded laundry. They were horribly stained! I dug around his drawers and found an alternative: a pair of navy blue pants.

“Why can’t I just wear jeans?”

“PUT THEM ON!” I barked shrilly.

“Well, actually, I CAN’T, because the button’s missing.”

“OK! THEY’RE DONE! NOW PUT THEM ON, QUICK!” (Yes, from that point on, I really was speaking in all CAPS).

I ran out to the car where the rest of my family was already patiently waiting.

“WHERE IS HE?!” I asked impatiently as we waited and waited for the boy/man of the hour to make his appearance in his newly-mended pants.

My husband got out of the car and went back into the house to figure out what was taking him so long.

They both emerged from the house looking peevish and disgruntled.

“He can’t get it buttoned,” he grumbled.

It hadn’t occurred to me that the spare button I had found might not actually fit into the buttonhole.

We pulled into the parking lot and I managed to force the too-large button into the hole. (Are we detecting a recurring theme here)? I stood back to look at my son and only then realized that the size 16 pants he was wearing were at least two inches too short for his gangly legs. (Yep. There it is again).

We made it in time for the rehearsal. The time had finally come to put my months of training to the test… 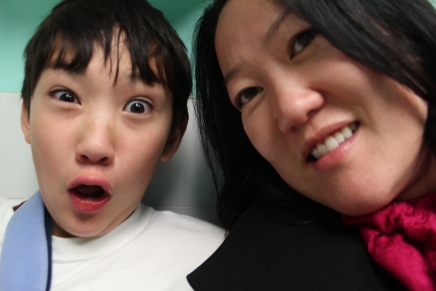