No one ever told me the dirty little secret of parenthood, which I’m about to blow the lid off – right here, right now. The fact is: having kids is like being on one long, never-ending guilt trip…with no junky snacks, no portable DVD player, and no stops to pee either.

“NO! And every time you ask, it adds on another half hour to the trip.” (This may or may not be something I’ve said to my children on long car trips).

It’s very possible that I skew more neurotic than most people, but I’m betting that a lot of parents will agree that staggering amounts of time are spent feeling really, really guilty about what you’re not doing for your kids, about what you are doing to your kids, about what dicey genes you may have passed on to them, about what others will think of your parenting skills…For example: I take my camera everywhere I go, but at the ER and at the orthopedist’s this week, I took pictures furtively, whenever no medical personnel were around. Why? Because I was worried the doctors and nurses might suspect me of Münchausen’s Syndrome by Proxy). See what I’m saying? Guilty. And neurotic.

If you’ve been following along this week, you’ll know that my son has a fractured humerus. This was confirmed at yesterday’s appointment to the orthopedist. 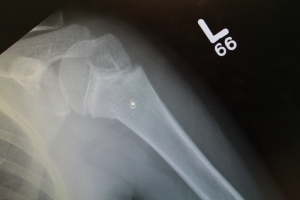 I’ve been indulging in a lot of self-flagellation about the fact that it took me two days to get him to the ER, but…how shall I put this? My son tends to be a kid who is not at all inhibited about expressing his emotions. He is perhaps somewhat more sensitive to pain than other children might be. This has led to more than one “Boy Who Cried Wolf” incident. One time we were booted out of the ER after coming in for his stubbed toe. (See “I Can’t Get it Right“). But then another time when I poo-pooed his stomach ache, it turned out he had to have an appendectomy. It’s slowly dawning on me that I have an absolutely unerring instinct to do the WRONG thing, at least as far as making medical judgment calls. (See, Mom and Dad? I knew I should never be a doctor)!

So how could I make up for screwing up yet again? Here’s what a guilt trip will cost you these days:

1) one fluorescent orange drink from the Coke machine in the waiting room at the doctor’s office, which ordinarily you would never even consider letting your kid anywhere near for fear that he might become radioactive 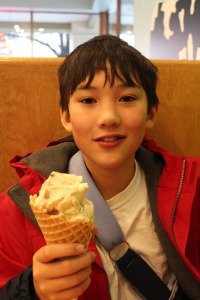 Atonement does not come cheap.

One thought on “Dirty Little Secret”