When I was in high school I went with a group of Korean people to a retreat center located on a remote mountain near the border between Virginia and West Virginia. Down-home American meals were served three times a day. Every day the Koreans would politely choke down their meatloaf, fried chicken, or sloppy joes without complaint. But every night, as soon as the cooking staff had all gone home, they would go out into the courtyard with their chopsticks, hunch over jars of kimchi they’d packed in their suitcases, and eat to their heart’s content by the light of the moon. From behind you might think they were freebasing crack cocaine.

American people like to try different cuisines when they eat out: Chinese, Mexican, Italian, Indian…When Korean people go out to eat, they almost always go to a Korean restaurant. My parents’ favorite Korean restaurant is Yechon in Annandale, Virginia. It’s open 24 hours a day, 7 days a week, all 365 days of the year. The tables are equipped with little call buttons, and the hardest-working waitstaff in all the Western Hemisphere hustle and bustle in their hanboks (traditional Korean dresses) to serve the many diners in the always crowded restaurant.

If you go to Yechon, check out Breeze Bakery Café. It’s owned by the same people and is right next door. I’m not crazy about Korean desserts. I personally don’t think sweetened red bean paste should ever be a dessert ingredient, but Breeze is irresistible. There’s a huge assortment of Korean cakes that you can sample, as well as more Western-style desserts. They have seating on two levels and in warmer weather, the upper level gives out onto a balcony. My kids love the gelato. I like the green tea bubble tea. 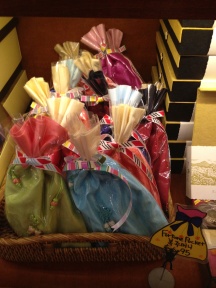 Over the holidays we ate here and at several other Korean restaurants with my extended family.

Me and my dad

The girls. My cousin and sister are giving Tatiana hair extensions.

My mom and her sister

There was laughter. (Nicholas was called upon to judge whose pet was cutest): 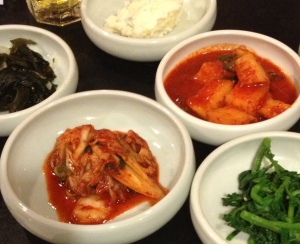 And there was… acorn jello!

Other favorite Korean restaurants to try in the Northern Virginia area:

We go here for the jajangmyun (see below) – these are noodles drenched in black soybean sauce. I swear it tastes better than it sounds! In Korea, ordering jajangmyun for delivery is like ordering pizza for delivery in the U.S.

HeeBeen in Alexandria and Arlington (buffet)

Do you have a favorite Korean restaurant near you?