What is it about a broken instrument that breaks your heart?

This is my ukulele: 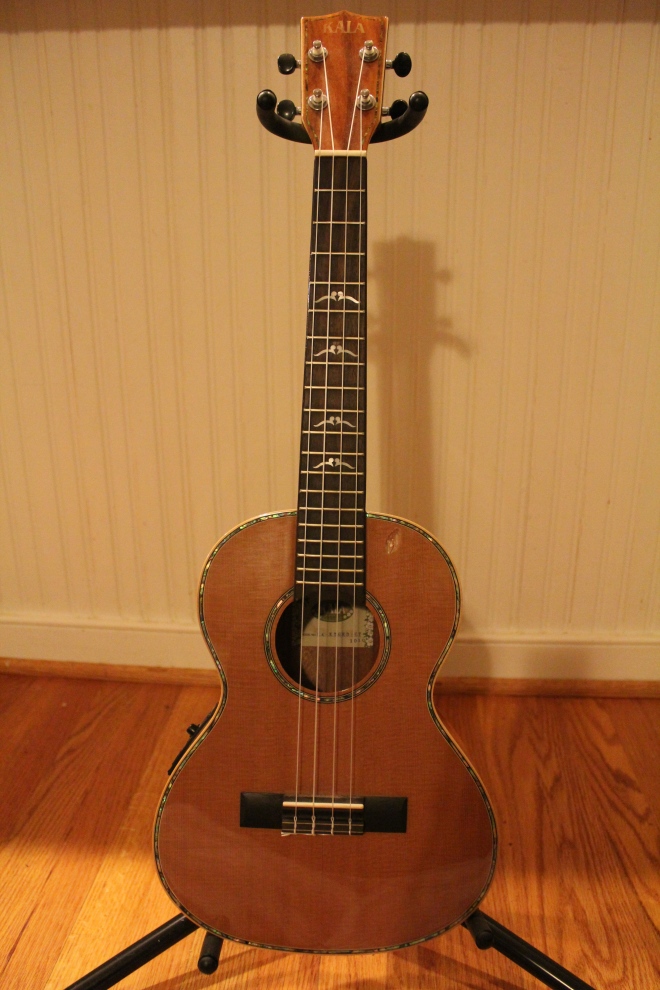 The kids were playing with it in the basement and it remained down there for a few weeks. When I asked them to bring it back upstairs, they delivered it into my hands with a hole in it. I gasped in horror when I saw it. I couldn’t even speak for a few minutes. (Anyone who knows me will tell you that doesn’t happen very often). The kids pulled out their best puppy-eyed, “Hunh?! There’s a hole in it?” when I pointed it out to them. They hadn’t even realized there was a hole and had NO IDEA how, or even when it happened. 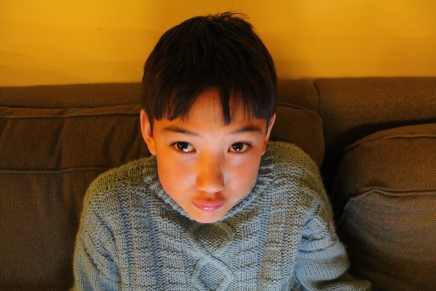 My limited edition, solid cedar top and Hawaiian Koa wood ukulele with gloss finish, shell purfling, pickup, and built-in tuner was such a pretty little instrument. It still plays. But now it just looks like an instrument that lives in a household with three young children, rather than like a beautiful symbol of its owner’s sad little fantasy of being a musician…(a musician, who also happens to live in an immaculately pristine and serene household where terrible tragedies such as this could never happen).

This is what happened to Teddy’s ukulele this morning:

We heard a thud and then wailing. Nicholas and Teddy were so upset they were shrieking incoherently. It turns out that the boys were hanging out on Teddy’s bed when the ukulele fell off of it. When he tried to retrieve it, he stepped on it and snapped its poor, scrawny little neck. This somehow escalated into a crazy hailstorm of caterwauling and shouting this morning. It was Bedlam. Everyone was LOSING it. Not a great way to start the day.

Clearly, we are living too carelessly. It’s not so much the broken instruments, the perpetually messy house, the overloaded schedules…It’s how we deal with these stresses. What’s getting broken that we can’t see? This is what worries me the most. The sense of security and well-being that we should feel at home is what’s at stake here. And if that’s what’s getting broken, that really is heart-breaking.

The other day my husband and I were discussing for the umpteenth time why our once sweet, unflappable-bordering-on-phlegmatic Teddy has become such a grumpy old man. (He even changes into a shabby old bathrobe as soon as he gets home from school). We first noticed the personality change when he had a bad case of Lyme Disease this past summer. He became irritable, prickly, and frankly: pretty hard to live with. A jacked-up dose of antibiotics seemed to knock out the disease, but he’s never fully returned to his Teddy Bear self of old.

Whenever Teddy goes into Grumpy Old Man Mode, I tend to assume that it’s the ghostly whisps of Lyme Disease making their presence felt. Colin’s theory is that we are modeling the crabby behavior. There is far too much stress in our house and we aren’t dealing with it well. Of course, I know that it could be far, far worse. We are lucky to have a home. We are lucky to have each other. I know we’re like a zillion families out there with two working parents, additional duties and commitments, three children with their own crowded roster of activities, two cute but rotten dogs, and a house and yard that look like the set of a post-apocalyptic movie. I’m just pretty sure that we deal with these stresses worse than most. We are crabby, grumpy, yell-y, steam-coming-out-of-the-ears kind of people. I know this is why when I’m waivering about whether or not to go to my yoga class, EVERYONE in my family starts begging me, literally begging me to go.

So we’ve resolved to change the paradigm from the top down. I want to go into the New Year with a calmer, happier household. My husband and I have challenged each other to an Anti-Crabby contest. We will be issuing demerits to each other for bad behavior. We’re still figuring out what the punishment for the loser will be, but it will be bad, really bad.

The Cut the Crab Challenge is ON.

Tell me your best strategy for dealing with stress in the “Leave a Reply” section by midnight Sunday, December 2nd and you’ll be entered into a drawing for a fabulous prize. I’m not sure what the prize for the winner will be, but it will be good, really good. Truly. So come on! Leave a comment! The fact that not too many people read this blog means the odds of winning are HUGELY in your favor!

10 thoughts on “The day the music died…”