WARNING: Flames may erupt from your computer as you read this. You may want to have a fire extinguisher handy.

My children have all gone to a tiny elementary school located in an idyllic rural setting. It sits across from a horse farm dotted with hay bales and a cluster of outbuildings with red tin roofs that glow in the sun. Every morning a staff member is posted at the door to enthusiastically and warmly greet by name every single child who walks through those doors. For the fifth straight year in a row, the school has been given the coveted Governor’s Award for Academic Excellence. There’s a lot to love about this school. And I have loved it for years. And because I’ve appreciated it so much, I’ve written check after check to the PTO, I’ve bought countless rolls of wrapping paper I didn’t need, wreaths I didn’t want…And I’ve given my time.

Since my youngest child was a baby in my arms I’ve been helping to lead an after school program as part of the PTO’s line up of enrichment classes. When I interviewed for my current full time job I made it clear that I would have to leave early on Friday afternoons in order to continue working with this program that I believe is so important. Though teachers for the other enrichment classes are paid, and the classes offered for fee, my fellow co-leaders and I have never asked for or received payment for our services, and we have always offered the class for free. Why would we take money and charge for a class that teaches kids that they can make a difference in the world through their own actions? Over the years we’ve raked leaves around our schools, visited nursing homes, helped set up homeless shelters, raised funds for earthquake-devastated Haiti, and much much more.

For our fall session, we always lead our school-wide  Make a Difference Day project. Last year we gathered enough supplies to make over 90 hygiene kits for the Robert Ford Haitian Orphanage and School Foundation. Dr. Ford, a local pediatrician who now runs the foundation set up by his father, came to talk to the kids. Here are a few of the things we learned:

-Every child is given 2 meals a day, which is 1 more than the average child in the community receives.

-The orphans have never seen running water in their lives. They walk considerable distances to a well to fill a bucket of water, which they’ll use over the course of a day.

-Many walk 2 hours to get to school.

-There are 16 year old 1st graders, who never had the opportunity to go to school until the school attached to the orphanage was built.

The kids listened to Dr. Ford with rapt attention. To them, he was a larger than life hero. Afterwards they clamored for his autograph.

Dr. Ford personally delivered the kits to Haiti and took pictures of the kids receiving their hygiene kits so that our own kids could see what they had been able to accomplish: 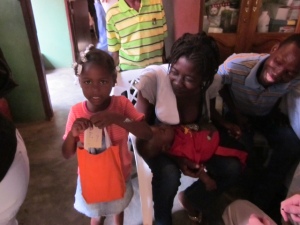 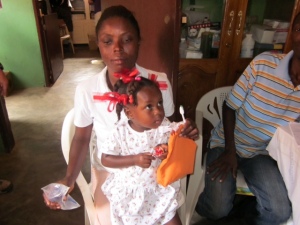 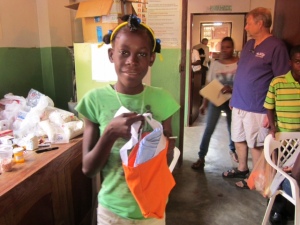 This year we asked Dr. Ford what we could to help support the orphanage again. He asked us to have a summer clothing drive for the children, and so this has been our school wide Make a Difference Day project for this year. While Dr. Ford was able to bring the hygiene kits with him on one of his visits, it would not be feasible to bring boxes and boxes of clothing. (By the way, he and all of the volunteers pay for their own flights to and from Haiti. The Foundation operates with absolutely NO overhead). In addition to asking for clothing, we’ve been asking for donations that would help defray shipping costs as well as add to our yearlong drive to raise $800: enough to support one orphan for a whole year.

When I learned that our PTO began the year (before fundraising) with over $47,000, I decided to request $500 to help fund the school’s Make a Difference Day project. My initial request was denied because of objections that were raised to the project itself:

-It could take 6 months for the clothes to arrive, or they might never arrive. (It would take less than three weeks. Even if it did take 6 months: it’s Haiti. It’s always summer there and sadly, there will always be orphans who need to be clothed).

-They’d rather just have the money. (Dr. Ford asked us not for money, but for clothes. As my co-leader said, “It’s not as if they can go to the Port-au-Prince BabyGap to buy clothes for the kids!”)

-And the worst in my book: we want the money to stay here, for OUR children.  (Aside from the fact that this is a selfish sentiment – I’m sorry, it just IS, Make a Difference Day IS for our kids. We are teaching them that we are all connected and responsible for one another. We are teaching them that they can make a difference in the world. Engagement in service activity reaps benefits for the receivers AND the GIVERS: students who do service work perform better academically, have better self-esteem, and develop leadership skills).

The PTO bylaws state that funding requests over $500 are no longer solely decided upon by the executive board, but have to be put to a general vote. So, I decided I’d ask for $600 this time around. I asked friends who would be willing to vote for this to come to the next meeting (Tuesday night) to pass this proposal. Many people agreed that this was a worthwhile way to spend some of the money that we’ve ALL paid into our groaning coffers.

On Friday I got a call from the PTO president saying that she had heard from a few parents that they objected to PTO money being sent to Haiti. (OK. I accept that people have different points of view). But her next statement left me completely flabbergasted. She said that she had spoken with the principal, who agreed that this issue would be too divisive, so it would be inappropriate to use PTO funds for this purpose. Uh….have I woken up in North Korea? NO discussion? NO vote? Bylaws Schmylaws?! Maybe we should cancel the presidential elections? I hear they’ve been fairly divisive. As my new peep asked (I’m telling you, she just gets better and better!), “Too divisive? Are they afraid we’re going to throw cookies and deviled eggs at each other?!”

“We’ll support another fundraiser for this purpose,” the PTO president offered. This is NOT the answer. I’m not alone in thinking that it is grotesque to continue to fundraise like crazy when we BEGAN the year with over $47,000. Why SHOULD I put more of my time and money into an organization that doesn’t pay it back out?! And while we’re at it: Why don’t we fully cover the cost of the annual 5th grade beach trip? Why don’t we fully cover costs for Destination Imagination teams? Why don’t we buy a new coffee maker for a teacher or replace a ratty classroom rug – other funding requests that have been denied. Why don’t we cover the cost of  our school’s Make a Difference Day project? My husband figured out that if the money we had at the beginning of the year (before fundraising, remember!) was measured in distance from Charlottesville to D.C., the amount I would have requested if I had been permitted, would be the distance from WalMart to the airport (or 1.5 miles).

And you know what’s really galling? Our service group originated the idea of a “Kids Night Out” to help Haiti in 2010. When it turned out to be a wildly successful fundraiser, the PTO appropriated it for their own profit.

I want my money back. And I want to be compensated for all the time I’ve spent leading this enrichment class for the PTO. That should be at least $600 right there. I’m not going to buy so much as a cookie at a PTO bake sale until things change around here. We’ve ALL paid into PTO funds year after year, and we ALL have a right to decide how that money gets spent. I KNOW that there are parents who have put in AT LEAST the amount I’m asking for who would be glad to have that money go to help the orphanage in Haiti. So PTO, although I’d much rather sit in my pjs on my couch Tuesday night, and I’m the kind of person who avoids conflict as much as possible, you better believe that I’ll be at the meeting. It will be intensely uncomfortable for me, and I think it will probably be intensely uncomfortable for you too. But enough is enough.

5 thoughts on “I want my money back.”