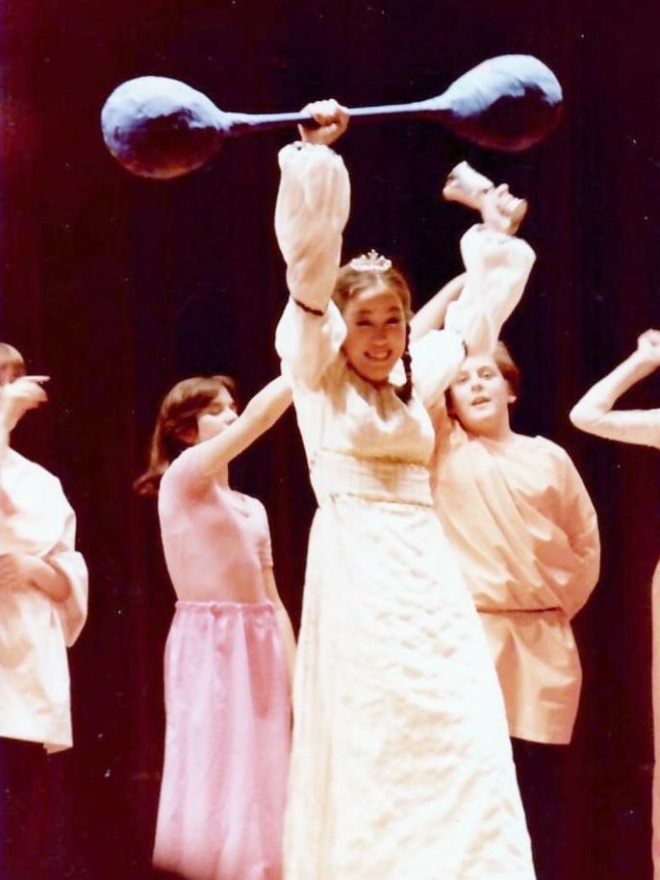 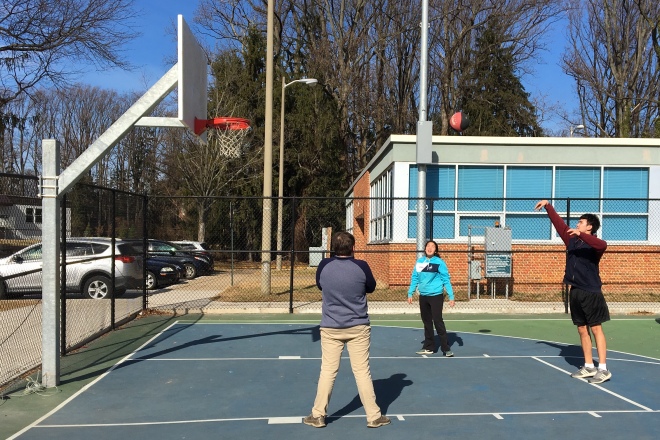 My daughter and I spent the second day of the New Year at the NIH. 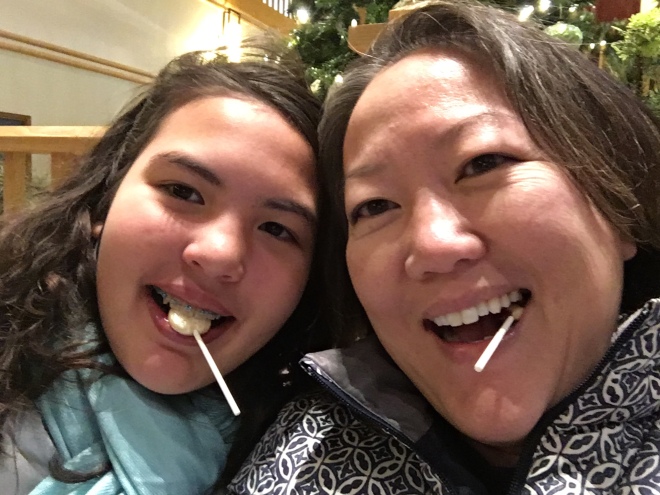 On the way to the clinic, we were lucky to catch a glimpse of the gingerbread houses, which were still up a day after the display was supposed to have been taken down:

“Dad would be happy to see this one! It’s his alma mater!” 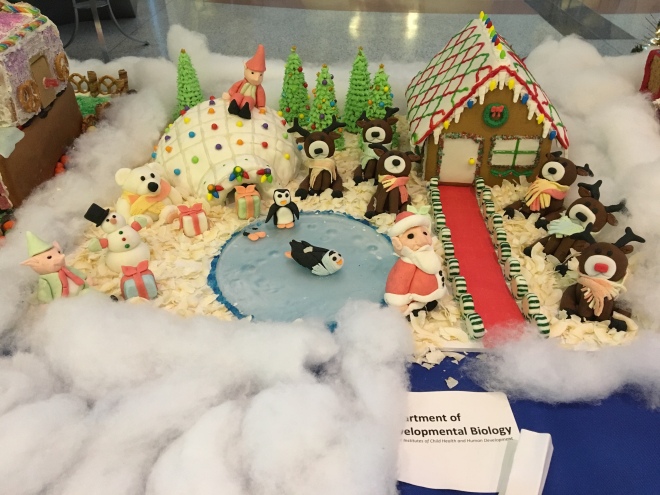 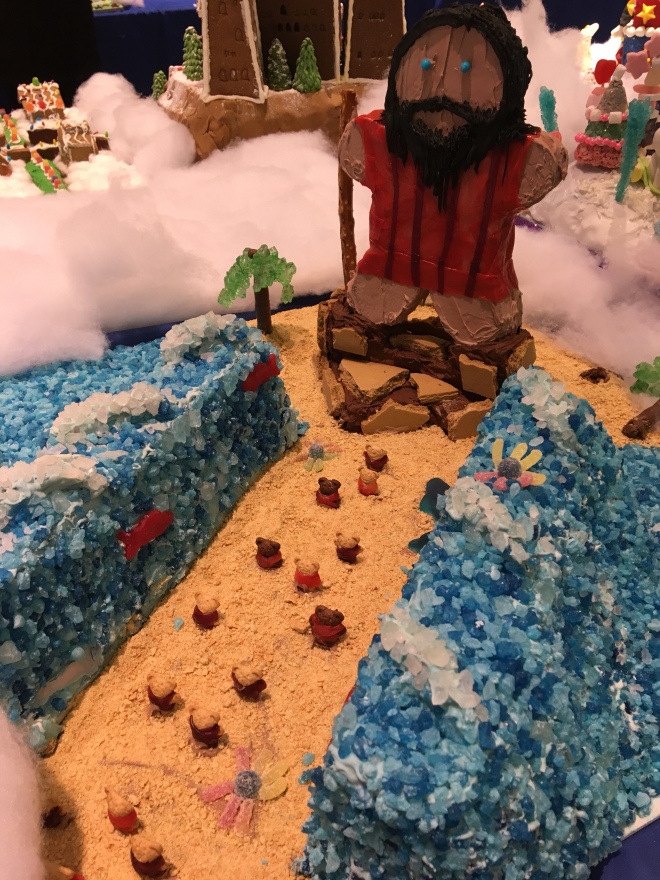 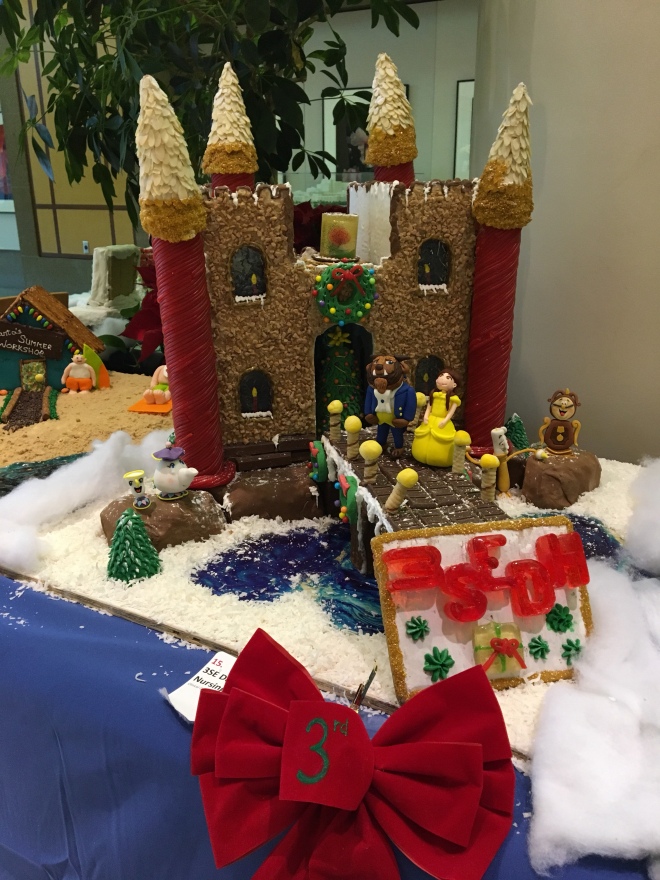 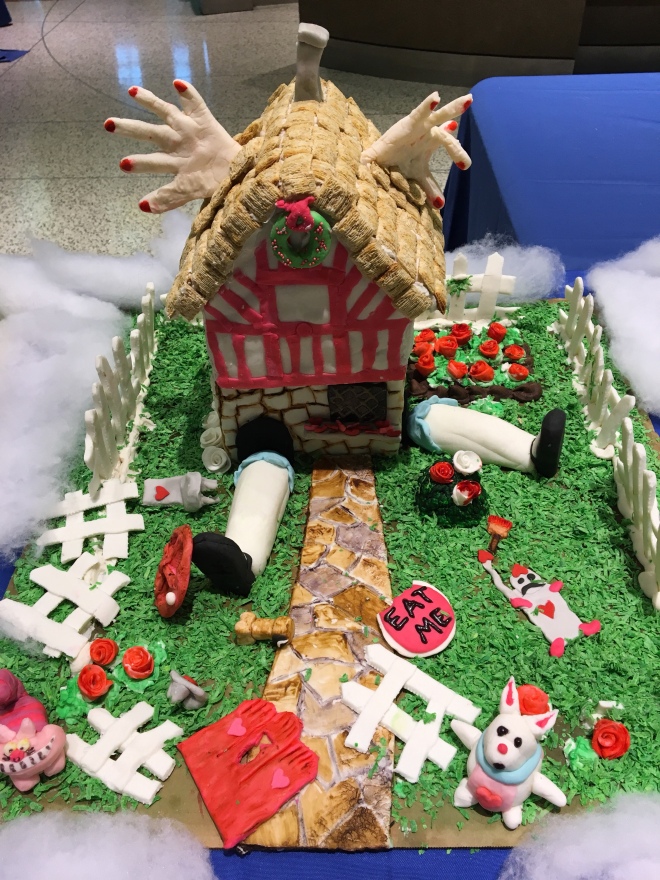 This one was the winner…

But my daughter’s favorite was the Harry Potter castle:

There were two of them! 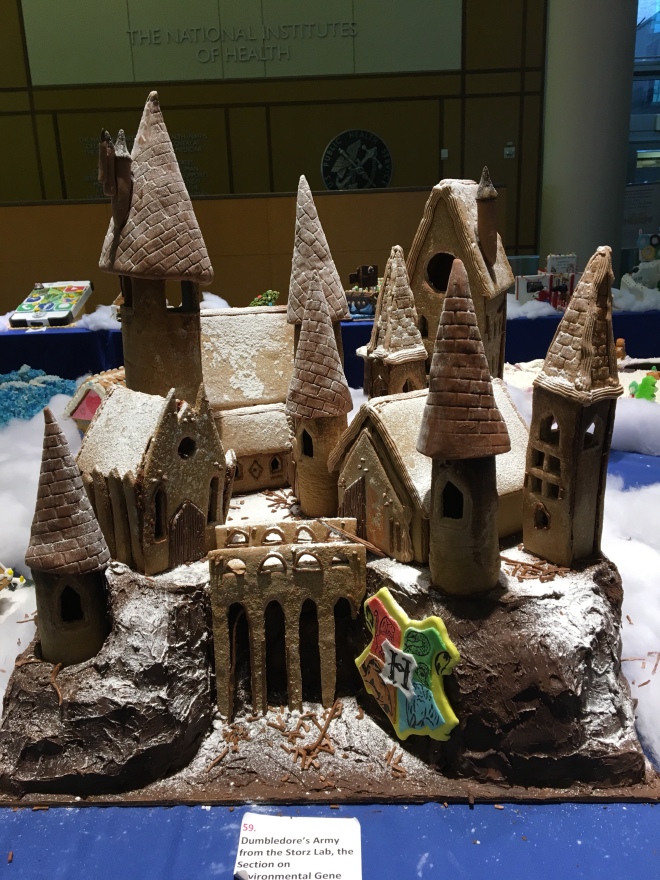 The Children’s Inn, where we had spent the night before:

By the time my daughter’s appointments were done, the houses had all vanished without a trace. 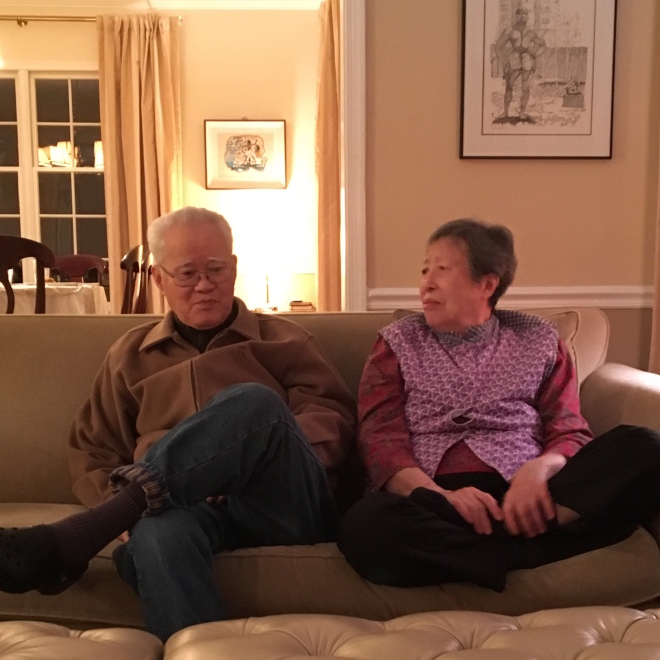 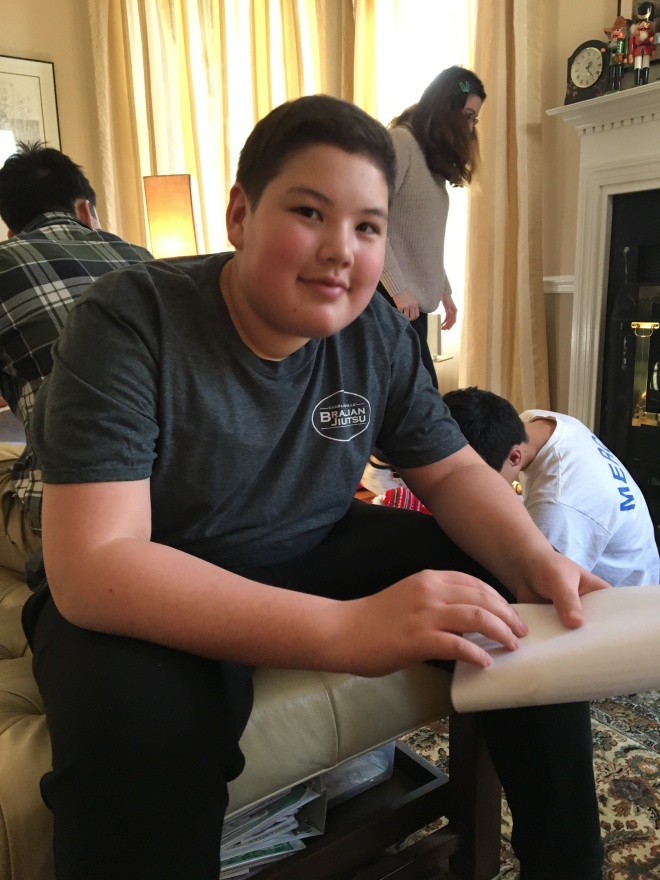 This gift was a big hit for the cell phone crowd… 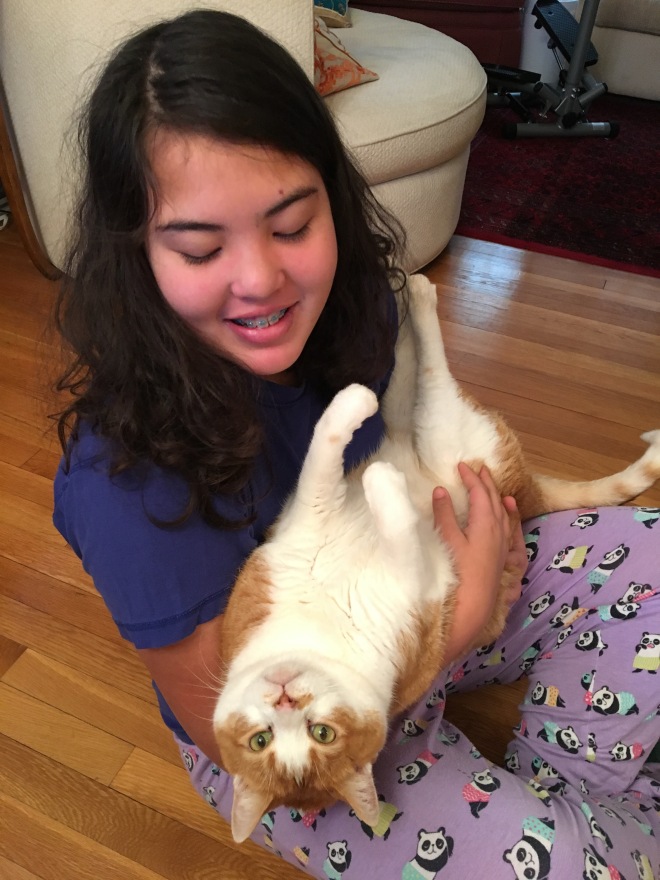 Meanwhile, back in Charlottesville…Tallis & Chloe were having their own Home Alone adventure… 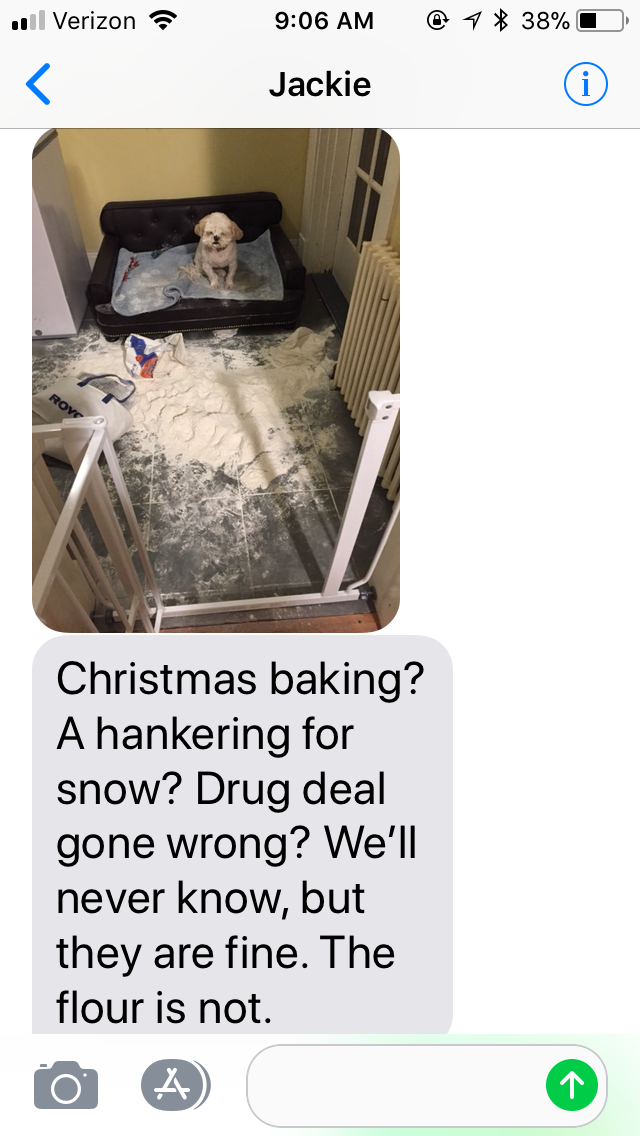 Do you know what it feels like to drive a brand new car after 15 years of driving in a beloved, but dilapidated jalopy? To drive a car with nary a scratch nor even the smallest hint of a ding to blemish its pearly white exterior? To drive in a car whose interior, still redolent of “new car smell,” is unsullied by a single crumb, wrapper, or clump of mud that’s fallen from cleats? To drive with the unaccustomed luxury of heat and doors that open at will? To drive in a car that’s so smooth and so quiet, that one sometimes questions if the motor is actually running?

When one of your dearest friends moves far away and you don’t get to see her very often, and she tells you she’ll be in town for Thanksgiving, but you’re going to be in New Jersey, and you’re devastated, but at the last minute you figure out a way to see her for just a few hours, but you worry that it’s been so long since you’ve seen each other and things may have changed and then this happens… 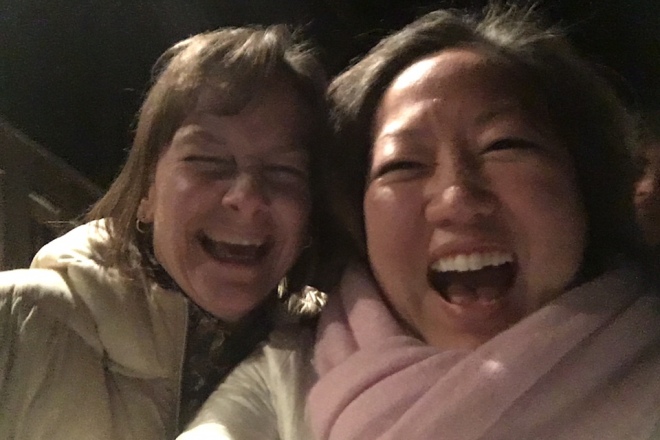 …and you have one more thing to be thankful for this year.

Halloween is kind of a big deal in my office… 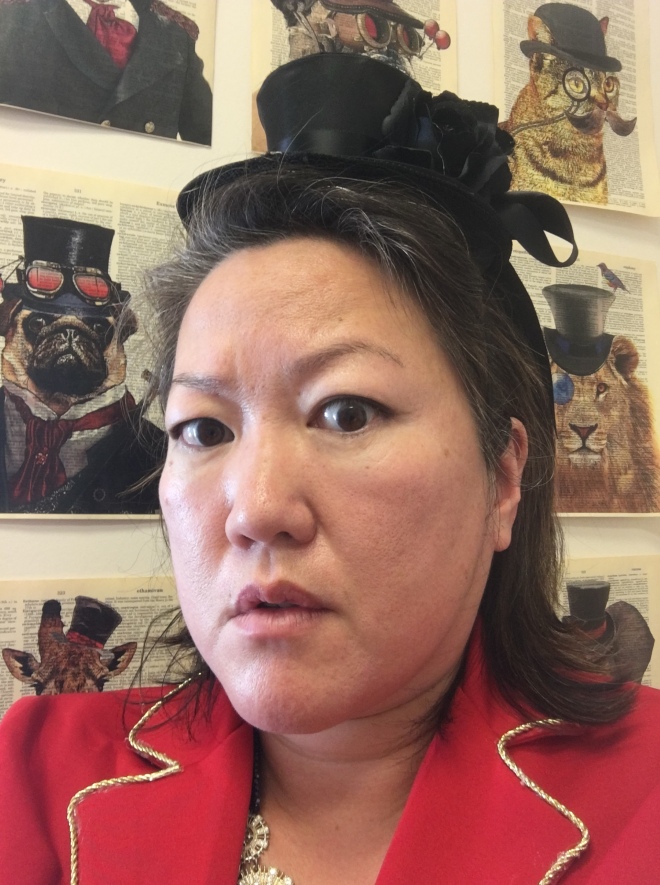 Hey, wait a minute…this IS my circus, and those ARE my monkeys!

You know what’s amazing about this costume?

Céleste & I went back to our old neighborhood to go to a four-house party with her friends.

When we got back home, I just couldn’t resist putting the costumes on the dogs one last time.

They are so over it.

If parties are torture for introverts, high school reunions are another order of cruel and unusual punishment altogether. I wrote about the last high school reunion I went to five years ago here. I’ve now subjected myself to the ordeal on at least a couple other occasions.

I disgraced myself in an even more painfully hideous way at an earlier reunion. The room was buzzing with lively conversation and laughter. Determined to overcome my natural tendency to stand around at a party like an awkward stump, I practically broke a sweat in my effort to be witty and engaging. I had to strain to hear and to be heard as I exchanged pleasantries with an old classmate of mine. I finally felt myself begin to relax and loosen up. After one particular exchange, I brayed with unbridled mirth. Mid-chortle I realized that the hideous sound that had just emanated from my person was the only noise in a room that had suddenly and inexplicably fallen completely silent. My interlocutor looked at me with raised eyebrows. I slowly turned around to see that photos of several of our classmates who had died at a tragically young age were being projected on a screen and that everyone was observing a moment of silence in their honor.

Photo booth fun at the 20th

It’s abundantly clear to anyone with two brain cells to rub together that people like me should not attend reunions, yet I continue to do so. Why?!, you might very well ask. I go for the sake of my dear friend with whom I made a pact years ago that we would be there for each other on these occasions.

A couple days before the reunion, she flew in from California and came to Charlottesville to spend some time with me before we headed to Arlington. As I was planning how we should spend those two days, I jotted down a list of all the great galleries, stores, and restaurants I could take her to. But as I wrote my list, I began to reconsider. My list was perfect for an indoor kitty like myself. But my friend is a nature girl. She loves the outdoors and goes backpacking in the wilderness for weeks on end, (for fun and not because someone forces her to)! I decided not to be selfish and to plan something that she would enjoy.

I took Friday off and we went to Humpback Rocks, a popular hike in the Blue Ridge Mountains a short drive from where I live. Despite its proximity, I’d never been there, because indoor cats like air conditioning and cozy couches to curl up on.

We talked and talked as we climbed higher and higher. It wasn’t long before I was gasping and gulping for air like a fish out of water. My friend, on the other hand, floated along as serene and graceful as a cloud. Every now and then she’d cast a discreet, sidelong glance at my heaving chest and would gently suggest, “Why don’t we stop and have a little rest, Ada?”

We eventually made it to the tippy top: 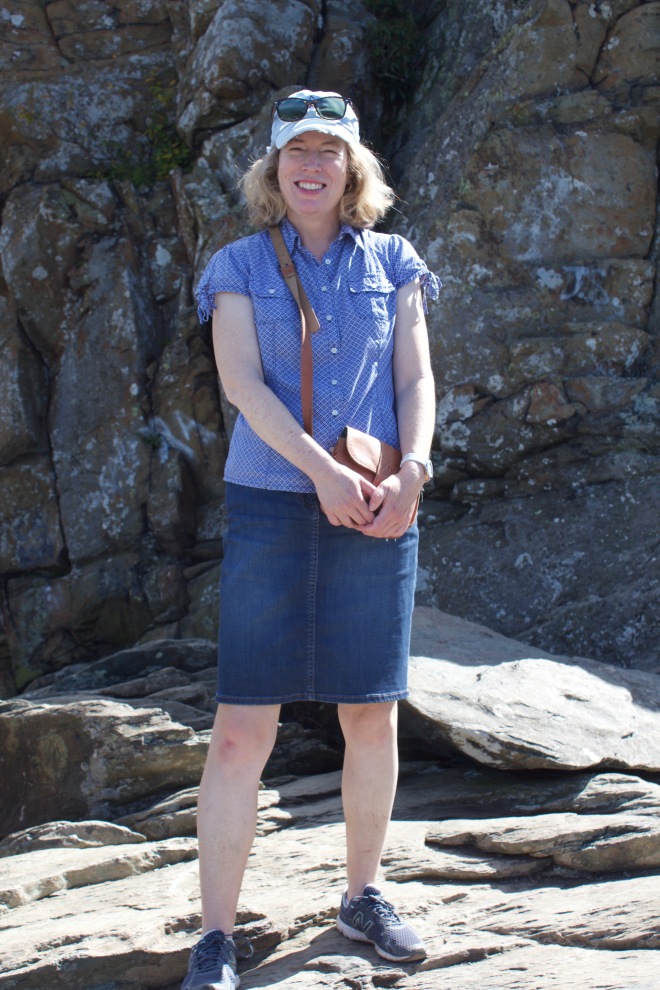 She glided up that mountain in a skirt!

The next morning we drove to Arlington and went our separate ways for a few hours. I spent the day with my family.

“So what are you going to wear to the reunion?” my sister asked.

From the bottom of my bag, I pulled out the crumpled ball that was my dress and gave it a shake.

My very stylish sister looked askance at my outfit and said, “Ummm…Aren’t you supposed to wear a fancy outfit and make an effort to impress when you go to a high school reunion?”

Later that evening my friend came to pick me up at my parents’ house and we headed to the reunion. As we pulled into the parking lot she turned to me and nervously asked: “Well…are you ready?”

“I guess so,” I replied and we headed to the restaurant.

The minute we entered through the doorway, my friend transformed before my very eyes. She sparkled and effervesced. Her eyes flashed as she flitted around the room, talking to this person and that person. She left a shimmering trail of fairy dust wherever she went.

I trailed along in her wake, my recently-overtaxed-mountain-scaling-calves screaming with each awkward step I took. I stuck my hand out awkwardly here, went in for a bumbling, awkward hug there, and had wooden, awkward exchanges…

I made it through the evening and was relieved to finally slip back into my parents’ house late that night. As I mentally took stock of the night, I began to reinterpret my performance in a more charitable light. Perhaps I had exaggerated my awkwardness in my own mind…Unlike at the last reunion, my face wasn’t shockingly red from sunburn. This time I hadn’t aggressively guffawed during a moment of silent remembrance.

“Hunh!” I thought to myself with a creeping sense of pride and perspective, “I scaled that mountain, dammit! Just like I scaled Humpback Rocks!”

As I peeled off my name tag, I realized my dress was stuck to my skin. Unbeknownst to me until that very moment, I had brushed up against poison ivy somewhere along the Blue Ridge. I’m not exactly sure how long the rash on my shoulder and arm had been weeping, but I could now see that rivulets of yellow pus were visibly oozing down my arm. Crusty bright orangey-yellow dry tracks revealed to me that this had been going on for quite some time…possibly for hours.

And that’s how I killed it yet again at another high school reunion.