A couple years ago when my dad was turning 80, my sister offered to take him anywhere in the world to celebrate the milestone. She thought he might want to visit a country he had never been to such as Italy or England. He said he wanted to go back to Korea. My sister and I accompanied my parents back to their native land for one last visit.

Our home base was Seoul, but early on in the trip we drove two and a half hours south to Yesan-gun in Chungcheong province to visit my father’s last living sibling. As we drove deeper and deeper into the countryside, I asked my dad to tell me about his hometown. Of the place where he spent his childhood he had this to say: There is absolutely no reason why you would have ever heard of it.

We drove past endless rice paddies and greenhouses until we finally pulled into a narrow alley. My father’s brother who inherited the family farm built a more modern house in the place where the old hanok used to be… 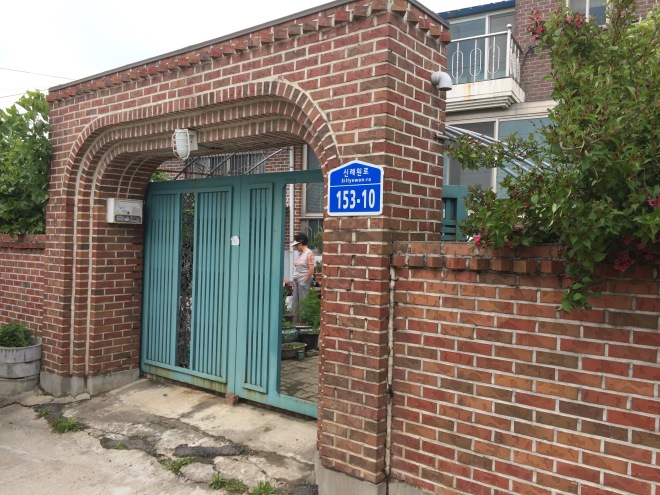 His widow (second from the left) came out to greet us. My dad’s older brother and his wife (in the middle) were also waiting for us at the house. 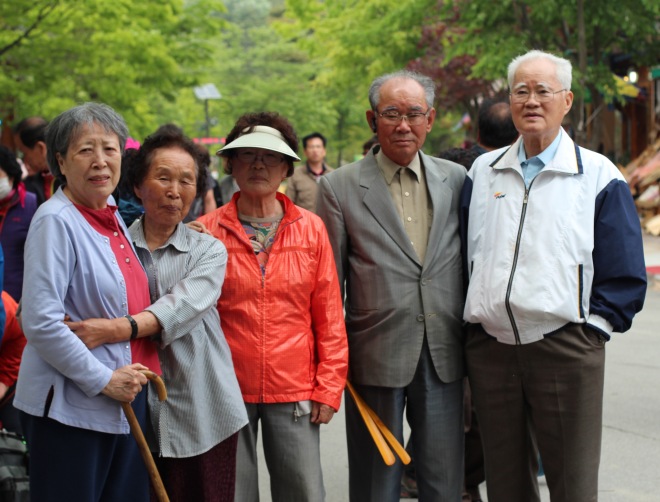 I didn’t notice it at the time, but at some point during that visit, my aunt gave my mother a bunch of gingko nuts from the huge sack of them she had harvested from her own trees. I imagine they were from trees that were part of the landscape of my dad’s childhood. My parents brought a handful of them back to their home in Arlington, Virginia.

Fast forward a year…Last autumn I was telling my parents about the “Pratt Gingko” planted in 1860 near the Rotunda at the University of Virginia. When it’s in its full glory, it is a magical experience to stand under the leaves as they rustle in the wind and float down to the ground, which becomes draped in a shimmering coverlet of its golden leaves.

“Did you know your dad planted some gingko trees in the backyard?” my mother asked when I had finished rhapsodizing about the tree.  He had planted the seeds from that handful of gingkos they brought back from his family’s farm.

My sister brought my parents down to Charlottesville this weekend for a visit. My sister and I were going to the Virginia Festival of the Book and thought for sure my dad, who loves books more than anyone else I know, would want to join us.

“I’m not going to go to the book festival,” he announced, “I brought the gingko trees to plant for you. Show me where you want me to put them.”

“How about in a row all along the back fence of the paddock?” I suggested, imagining the vision of golden radiance I would one day see from my kitchen window.

“Well, that would be ok,” he replied gently, “But…no one will be able to see them there.”

I had given the Wrong Answer: “Let’s put them wherever you think would be best, Dad!”

I watched my dad struggling to break through the tough soil in the part of the (FRONT) yard where he chose to plant the trees. I hovered around uselessly, then went to join my mother on the front porch where we sat and watched.

When she saw that he was having trouble standing up, she nudged me and said, “Go! Help your dad! He can’t get up!”

I ran over to him and reached out my hand.

“Can I help you up, Dad?” I asked hesitantly, afraid to embarrass him.

He wouldn’t take my proffered hand and told me he just needed a moment to rest.

Reluctantly, I left to make it on time to the workshop my sister and I were attending at the Festival. I only had time to urge my daughter to get her grandfather a glass of ice water before I had to drive away.

Later, my mother and I walked around the area where my dad had planted the seven baby gingko trees he had grown from seeds. My mama, the drama queen, always ready to devastate her audience with a toss of her head or a tragic line sighed and said, “As I watched him planting the trees, I realized these really are the last days of his life.” In the end, she told me that she and my son had to help him back to his feet and that my son took over digging the holes…

“One day, when the trees are grown,” she said as we inspected the tiny little saplings, “Your children will remember planting them with their grandpa.” 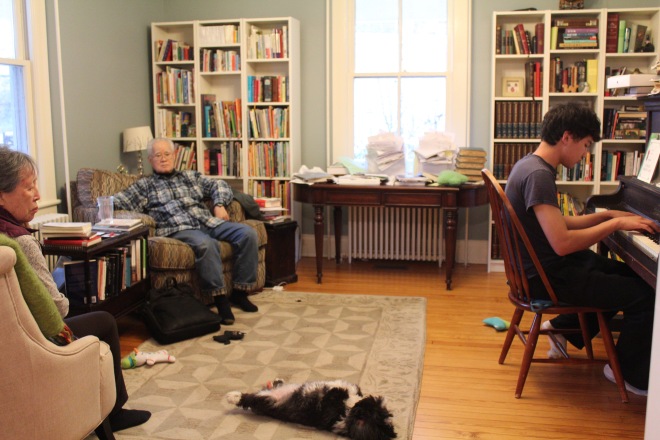 Command performance for the grandparents…and one supremely unimpressed dog.

Pssst! P.S.: My sister Annabelle Kim recently published her novel Tiger Pelt, a Kirkus Best Books of 2015, partly inspired by stories my dad told us about his childhood. You can find it on Amazon, Barnes & Noble, & Indiebound!